The Witchcraft of Being a Notary

In the Catholic corners of the world, April 25 is the feast of St. Mark the Evangelist. Sometimes depicted with a winged lion (more on this in a bit), Mark is the patron of interpreters, lawyers, opticians, painters, pharmacists, secretaries, the city of Venice… and, most importantly, notaries. Being a notary myself, and having a penchant for Catholic decor regardless of my religious proclivities, St. Mark’s Day is a right proper celebration for me.

Becoming a notary was one of the few good decisions I made before I got sober, although the rationality of what inspired me to do so is up for debate. It was back in 2007: I was relaxing on my day off, and I decided to watch Sleepy Hollow. Early on in the film, they introduced the character of Notary Hardenbrook, and I was like, “Huh. I didn’t realize there was ever such a thing as a career notary. How do you sign up to be a notary, anyway?”

Hyperfocus kicked in, and much like the time I idly wondered, “So where did Wicca come from, anyway?” and ended up initiated, within a couple of days of my Sleepy Hollow viewing, I was commissioned as a notary public for the State of Texas. This is not, sadly, as big of an accomplishment as it might sound: In some places, there is a lengthy certification process, but in Texas, you just send $80 to the Secretary of State, and they ship you a stamp with your name on it and are like, “Good luck!”

I figured out fairly quickly that I should probably learn what a notary actually did. And the first thing I discovered was that anything that goes wrong during the signing of a document is always the notary’s fault. Always. With fines and jail time as potential consequences for shoddy work.

Remember the story about Stormy Daniels signing a nondisclosure agreement with whatshisname over their alleged affair? One of the biggest reasons the NDA was deemed unenforcible was because the notary who’d witnessed the signing didn’t properly record the event, and y’all, she got in so much trouble. Stormy, on the other hand, was free to discuss the details of the NDA without repercussion, because the effed-up notarization rendered the whole thing invalid.

Long before this particular incident made national news, I was doing everything I could to protect myself and my new notarization abilities, the main thing being keeping my stamp safe at all costs. I was working for a company at the time that often needed me to notarize things, but one of my co-workers had impulse control issues, so if I was away from my desk, she’d just grab my stamp and run, which would result in me chasing her through the office, swinging my journal like a scimitar and demanding she hand over whatever paperwork she’d inked up without my permission.

Because here’s the thing, and where Witchcraft starts tying into notarization. My stamp has my full name on it, and when I apply it to a document, I’m sealing that document as my legal self. People often assume that the stamp itself has all the authority — like, it makes a document “official” or something. But the reality is that the stamp is the physical manifestation of the notary’s will and word, indicating that anyone signing a given instrument in their presence is who they say they are.

In practice, a notary is a ministerial officer, which means that they are an impartial witness who is expected to follow written laws without discretion. Judicial officers — like, say, justices of the peace — have the authority to make decisions regarding the application of law, but ministerial officers perform functions under the law. In other words, notaries have shit to do, but we don’t have a say in how that shit gets done.

The main duties of a notary are to establish the identities of the signers of documents, verify their willingness to sign, and confirm that they understand what they’re signing: This all falls under the heading of acknowledgement. In situations where a signer is required to take an oath, the notary issues a jurat, in which the signer swears that the information contained in the document is true and correct. This is the best notarial thing ever, because when people ask me what I do for fun, I get to go, “ADMINISTER OATHS,” and that makes me feel like fucking Gandalf.

Oaths and willpower aside, there are a lot of other cool occult influences on the office of notary public.

For instance, I mentioned St. Mark at the start of this post: The symbols of the Four Evangelists (St. Mark, along with Sts. Matthew, Luke, and John) correspond to the fixed signs of the Zodiac, and as the Lion, St. Mark represents Leo and the Element of Fire. Notaries are also ruled by the Mercury and Saturn, and when we combine those planetary associations with Leo, we are given a daring color palette of red, orange, and black.

By accepting their commission, then, a notary is granted Mecurial and Saturnine capacities, backed by the honesty of Leo and the authority of the Sun. And yes, I am 100% romanticizing the hell out of this, but the responsibilities of a notary absolutely line up with the Witches’ Pyramid. Hear me out on this:

I am also quite pleased to announce that the owner of the shop where I work said that I could put a notary public sign next to the front door, so I went ahead and transformed the tiny back office into Notary HQ, and I’ve contacted the attorneys who regularly use my services to let them know where they now can find me. As one of them put it, “Great! I can definitely bring… some of my clients there.”

I’m already certified as a signing agent, so the next step is to obtain process server accreditation, at which point I will have achieved the notary trifecta and will be the unstoppable avatar of Themis on earth. If business is steady, I’ll consider expanding into spiritual consultations and candle lighting solutions.

All of this because I watched a Tim Burton movie 14 years ago. But from a Chaos Magic perspective, I’m actualizing fiction, and that feels pretty darn Witchy, too. 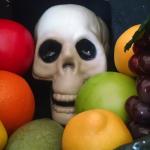