No One Can Unite Evangelicals and Mormons Quite Like Barack Obama

No One Can Unite Evangelicals and Mormons Quite Like Barack Obama May 14, 2012 David French 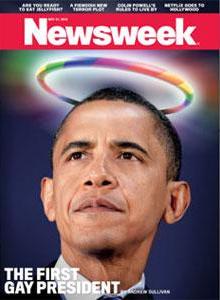 I must confess that I awoke this Monday morning feeling a bit useless — feeling very small and insignificant in fact.  Not that it’s a bad thing.  After all, in this graduation season if I could give one piece of advice to young and ambitious graduates it would be this: “Learn to get over yourself — and quickly.”  But still, it’s not necessarily fun to feel insignificant.

Why did I feel like blowing off work, skipping even my shower, and just heading straight to my favorite video game to tune out the world?  Because last week Barack Obama accomplished more in about two minutes and thirteen seconds than I was able to accomplish in more than six years of continual effort.  Barack Obama united evangelicals and Mormons around Mitt Romney.

In late 2005, I realized that Mitt Romney was not just an outstanding governor of Massachusetts and a man of character and integrity (that much was obvious), but he should also be President of the United States.  Starting in early 2006, Nancy and I did our best to try to make that happen — organizing straw polls, launching a website, giving money, writing a book, and generally talking to anyone who’d listen.  Our message was simple: Mitt Romney and evangelicals certainly have theological differences, but they share core values, and Mitt can be counted on to defend those values.

Over time, our blog morphed just a bit and became a home for thoughtful Mormon-evangelical dialogue, and I treasure those conversations (in fact, that may ultimately prove to have been the highest and best purpose for our efforts).  At the same time, it sometimes felt like we were making zero headway with our fellow evangelicals.  In 2008, they flocked to a less-conservative Mike Huckabee rather than support Mitt.  And in 2012, southern evangelicals flocked to the less-conservative Rick Santorum.  Heck, at one point it even seemed like Newt Gingrich would sweep the evangelical vote.

But Mitt hung on, kept fighting, and won enough evangelicals to win the nomination.  But what about the general election?  After months of opponents hammering Mitt for being “no different” from Obama, would evangelicals see reality?  And if so, would they see in time to make a difference?

Now we know the answer.  It turns out that no one can draw distinctions better than President Obama.  We already knew that he was radically pro-abortion (after all, he refused to support the born-alive infant protection act), that he believes sexual liberty trumps religious liberty (see, for example, his HHS contraceptive mandates), and that some of his key supporters were contemptuous of stay-at-home moms, but last week he went all the way.  Last week he adopted the secular left social platform in its entirety when he endorsed gay marriage.  On life, religious liberty, and marriage, he is a firm “no.”  Mitt Romney is a firm “yes.”

My work is done.  My mission is accomplished.  But I didn’t accomplish it.  Thank you, President Obama, for doing my job far, far better than I ever could.  Now, if you’ll excuse me, I’ve got some gaming to do.

May 13, 2012
Forget Fabio: Books-a-Million Displays Books With Pornographic Covers in Plain View of Children
Next Post

May 15, 2012 Graduates, It's Not About You
Recent Comments
0 | Leave a Comment
Browse Our Archives
get the latest from
Politics Red
Sign up for our newsletter
POPULAR AT PATHEOS Politics Red
1