Bloomberg Businessweek’s Anti-Mormon Cover: Imagine this Depiction of Your Faith? 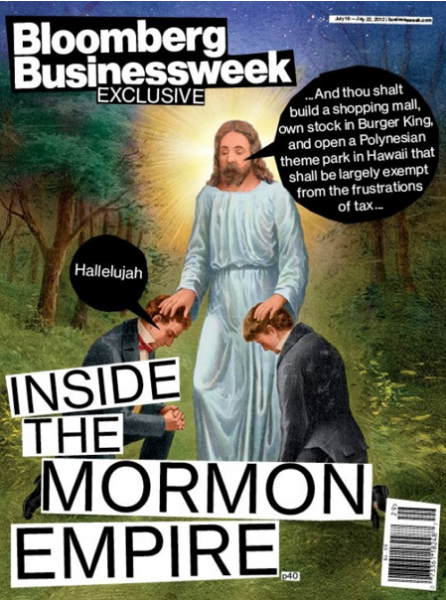 Age-old anti-Semitic stereotypes are now being transposed onto another religion … one that happens to be the faith of a wealthy Republican candidate running for president.

Looking beyond the cover art, which will undoubtedly offend Mormons if not most Christians, the piece itself is fascinating –  even though it’s liberally sprinkled with curious and strained assertions, like: “perhaps unsurprising that Mormonism, an indigenous American religion, would also adopt the country’s secular faith in money.” Do Americans have a secular faith in money? No. Americans have faith in faith. The United States is more religious than almost any developed country in the world.

Most of you reading this aren’t members of the Church of Jesus Christ of Latter Day Saints.  I’m not either.  That’s the beauty of being Americans — we get to choose what church door we open on Sunday.  (Or don’t open!) However, this is the type of media coverage we should be upsetting to all people, especially people of faith.

Can you imagine if they’d made a cover mocking your religion?  What about one mocking President Obama’s Jeremiah Wright’s black liberation theology?

Another blog made what they think is a more accurate version of the Bloomberg cover here.  Let’s stand together as the LDS church is mocked relentlessly, while the President’s theology gets a pass.  It will only get worse between now and November.

Why are Mormons Beating Baptists in Church Growth?

Even if You’re Not a Mormon, You Should Be Outraged at This

Was The Book of Mormon Quoted on The Bachelorette?

July 13, 2012 Did the Bachelorette Recycle a Line from “You’ve Got Mail” to Dump Sean?
Recent Comments
0 | Leave a Comment
"and what makes this even better is that the two girls are sisters http://www.huffingtonpost.c..."
d Black activists cried "racism" over this ..."
"It's heart wrenching to hear about this. Our country is getting more vile and depraved ..."
BlackSun Syndicate Target proudly welcomes men to use ..."
"a wolf dressed as a sheep is still a wolf - if u have a ..."
Aussie In Austin Target proudly welcomes men to use ..."
"I am picturing a little turd in pajamas sipping coffee."
Cantbelieveyouthinkthis Los Angeles Craigslist ad somehow captures ..."
Browse Our Archives
Related posts from The French Revolution