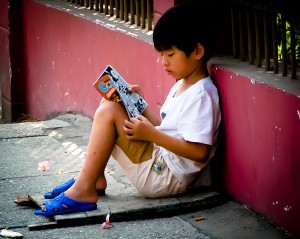 I’m almost finished with Michael Chabon’s fantastic novel, The Amazing Adventures of Kavalier and Clay. If you aren’t familiar with this Pulitzer Prize winning novel, the book follows the tale of two Jewish boys-on-the-cusp of manhood who create comic books during the “Golden Age of Comics” (before World War II and just after).

In the later part of the novel, Sammy Clay, the writer of the duo, has to appear before Congress during the 1950’s Great Comic Book Scare.   Chabon shows in his masterful prose how all the age old prejudice against comic books, their content, and influence on the youth comes crashing down on the comic book makers.

This passages prompted me to think about our current views of comics. On one hand, we love comic books movies. We can’t get enough of them.  On the other, we think comic books themselves are “low” trash which only geeks, who can’t speak to girls, read on a full time basis. The later attitude illustrates the ongoing dichotomy, contributed by some elements of Christianity , between “high” and “low” culture.

William Romanowski, Professor of Communication Art and Sciences at Calvin College wrote in his  Pop Culture Wars, White Anglo Saxon Protestant folks have always had a snobbery when it comes to things like comic books and the movies. They developed a split (reflecting their deep theological dichotomy of sacred and secular) to define things as “high” and “low” in regards to music, movies, and books. Romanowski argues this split can be seen in our culture today through such things as “Academy Award” eligible movies and “pop corn flicks”. He states in his book there really should be no split. “High” and “Low” are all culture and we shouldn’t attach pseudo-theological attitudes where they don’t belong. In other words, better theology, that all of creation is sacred to God, would give us a better understanding of how movies, books and music fit into being a human being.

In the Christian circles and the wider culture, I keep hearing comic books and the movies that inspire them as “inspired by the minds of fourteen year old boys”. The way it is said, with a sneer, a laugh of derision and a dissmissive way, implies the mind of a fourteen year old boy is automatically out of bounds to create anything worth while to the our wider cultural understanding.

No wonder we have a culture of lost boys.

Granted, I understand some of the problem. Comics, and the mind of fourteen year old boys, can be a weird and offensive place. For example, some comics still portray women as objects of sexual fantasy with very little substance. That is changing. And, there is often a very disturbing amount of senseless violence in many titles. All which CAN (not always), reflect the mindset of fourteen year old boys.

Stan Lee, and comics, at their finest.

So, the next time you’re ready to dismiss comic books and those who read them, think about what you’re saying. Think about the things you watch. When you think about it, you might realize the mind of a fourteen year old boy isn’t such an abnormal place after all. Even more, it might just be a place for cultural redemption.

February 6, 2013
What Minor Star Wars Character should get their own movie?
Next Post

February 18, 2013 Lego Sets Versus Literary Classes
Recent Comments
1 Comment | Leave a Comment
Browse Our Archives
get the latest from
Entertainment
Sign up for our newsletter
POPULAR AT PATHEOS Entertainment
1