Challenges for conservative churches in Scandinavia

May 8, 2017 by Gene Veith
0 Comments
Challenges for conservative churches in Scandinavia May 8, 2017 Gene Veith 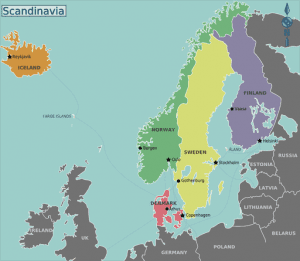 In Finland, I taped three programs for the Christian television network.  The host, Leif Nummela, is a well-known figure in confessional Lutheran circles and in Scandinavian Christian circles in general.  On his program, Bible Café, we had wonderful discussions of the Bible, Grace, and Vocation (Luther’s three major contributions to Christendom as a whole).  The network goes out not only to Finland but to Sweden, Estonia, and Russia.

Finland is more religiously diverse than I had realized.  There are quite a few Pentecostals–I talked to a campus pastor from that tradition who said that one of his church’s problems is combatting the Prosperity Gospel–and American style evangelicals (Reformed, Baptist, non-denominational, etc.), though that term is mostly used in the old sense to refer to “Lutherans.”  And Emil showed us congregations of Adventists, Baptists, Methodists, Catholics, and Orthodox.  There is even a Mormon Temple in Finland, as well as mosques.  Most of the programming on TV7 is from the Pentecostal and general evangelical perspective.

Leif told me about some of the challenges for conservative congregations and church bodies in Finland and in Scandinavia as a whole.

Citizens pay an automatic “church tax” of 2% of their incomes, unless they opt out of it.  For all of their alleged secularism, the big majority (70% in Finland) want to remain on the church rolls and pay the tax, which goes to the state church.  So separate conservative congregations run out of the mission organizations and independent church bodies have to teach their people to give offerings beyond the church tax.  But they do.

One problem is having a place to meet.  Having a beautiful sanctuary like the Luther Church that we posted about is an exception. The state church owns the church buildings throughout the country and will not let conservative groups use them.  Even buildings that stand empty.  One state church official said that they would rather Muslim worship in them than these conservative groups.

So conservative and confessional groups, which for the most part cannot afford their own buildings (except for those that have been around a long time), meet in office buildings, auditoriums, mission facilities, and other non-liturgically-designed spaces.  Some congregations meet in Seventh Adventist churches, since they are not being used on Sundays.  (This is what our former congregation, St. Athanasius Lutheran Church in Vienna, Virginia, did!)

A bigger problem is getting pastors.  Not training pastors, but ordaining them.  Becoming a pastor simply requires a theology degree from one of the universities.  My impression is that there isn’t much “practical” ministry training as in the American system.  I did meet several pastors who studied for at least a few years at Concordia Theological Seminary in Ft. Wayne.  But becoming a Lutheran pastor in Scandinavia requires ordination, and ordination requires a bishop.  And bishops of the state church will not ordain anyone who does not recognize the validity of female pastors.  Originally, pastors were allowed to dissent on this issue, but no more.  Some Scandinavia jurisdictions require new pastors to receive communion from a female pastor before they can be ordained, perhaps by a female bishop.

Some conservative pastors were products of the old system, but new would-be pastors have problems getting ordained.  One solution the Finns have found is to work through the Ingrian Lutheran Church in Russia.  The Ingrians are closely related to the Finns and their language is very similar.  Their church, which is in fellowship with the Lutheran Church Missouri Synod, is thriving, growing, and very confessional.  And they have a bishop.  Leif was ordained through the Ingrians.

He told me that one independent group of Lutherans simply have their congregations call one of their members to be their pastor, dispensing with ordination entirely.  I told him of the way the Lutheran Church Missouri Synod does it.  According to our doctrine of church and ministry, congregations call a pastor, who is then ordained by other pastors.  After all, ordination is not a sacrament and there is a continuity in the pastoral office that goes back to Christ, with bishops having no more intrinsic power than any other pastor.  He appreciated my point but said that in the Scandinavian context, their pastors need ordination from a bishop.  Otherwise, the state church would give them even more problems over the issue in not recognizing their ministries, which now they have to do.

I was struck with how relevant to confessional Lutheranism in Scandinavia are the historical experiences of the LCMS and the way our church body worked out the doctrinal issues of church and ministry.  As I’ve posted, confessional congregations here are often spontaneous assemblies under the auspices of a mission organization, rather than official entities of an institutional ecclesiastical hierarchy.  Just as immigrants on the Missouri frontier formed congregations without benefit of bishops or state church.  And the way the Missouri Lutherans ordained their pastors may eventually be the solution for the Scandinavians.

Leif told me that there are some bright spots in Scandinavian Lutheranism, particularly as the secular state cuts back the power of the national church.

In Norway now, the church tax follows the religious preference of the individual citizen!  So that if a Norwegian chooses to belong to an independent Lutheran congregation (or to a Baptist or Pentecostal or Adventist congregation), the 2% of their members’ incomes goes to that congregation.

Also, in Norway, independent church bodies have at least some access to the government-owned church buildings.  And some Norwegian bishops will ordain conservatives.

The best situation of all, though, he said, is in Denmark.  Because of the not-completely-benign legacy  of N.F.S. Grundtvig, author of the hymn “God’s Word Is Our Great Heritage,” Denmark has a law that if any 50 citizens want to form a congregation, they can.  They can then choose who they want as a pastor and the bishop has to ordain him.  As a result, Danish confessional congregations are forming with impunity.

May 8, 2017
The Republican defeat on the spending bill they passed
Next Post