WILLS POINT, TX – Gospel for Asia (GFA World, www.gfa.org) founded by K.P. Yohannan, issues the second part of an extensive Special Report on extreme poverty worldwide, and how poverty elimination and poverty alleviation is possible, but not inevitable.

In the face of such overwhelmingly large numbers, the price of a cup of coffee can seem insignificant—but it doesn’t have to be. Small amounts of money can be leveraged to make a big difference in the lives of the poor, as Gospel for Asia knows well.

For the price of just two large frappuccinos, you can buy a pair of chickens that will help lift an Asian family from below the poverty line. The eggs from the chickens can be sold or hatched to provide ongoing income.

That’s not the only livestock-for-livelihood option in GFA’s annual Christmas Gift Catalog. For $65, you can provide a family with a lamb, while $140 purchases a pair of goats, all of which provide milk to sell or drink and offspring to expand the herd. A water buffalo ($460) not only makes plowing fields easier but also produces milk for drinking and dung that can be used as fuel and fertilizer.

Ministry supporters have helped Gospel for Asia provide these kinds of poverty-alleviating gifts at Christmastime for more than a decade. So far, almost 2 million families have been helped through gifts that generate income or increase quality of life.

Many other organizations have launched similar programs, prompting media coverage of how “charity gift catalogs are proliferating, offering donors the opportunity to ‘buy’ everything from a goat to a sewing machine to a herd of cows.” Heifer International has been distributing livestock for more than 70 years and has helped more than 31 million impoverished families experience poverty elimination.

All of those gift purchases combine to help a lot of families, who in turn can have an impact on their wider community. Such was the case with 44-year-old Kanal, a day laborer trying to support his family of three children on his meager earnings of $3 a day.

Then Kanal received a pig through a GFA-supported distribution, and everything changed for his family. The sow delivered eight piglets, seven of which he sold for almost $40 each. From a second litter, Kanal gave a piglet to a neighboring family in need, setting them on an upward cycle out of poverty, too.

The pig he received as a gift unlocked a chain of benefits, Kanal said. With the money gained by selling some of the offspring, “we have bought a goat and chickens, which are also going to be another source of income for our family. We do not have any problems now to pay the school fees for our children and to meet all their needs in school. … We also have purchased roofing sheets to construct our house.” 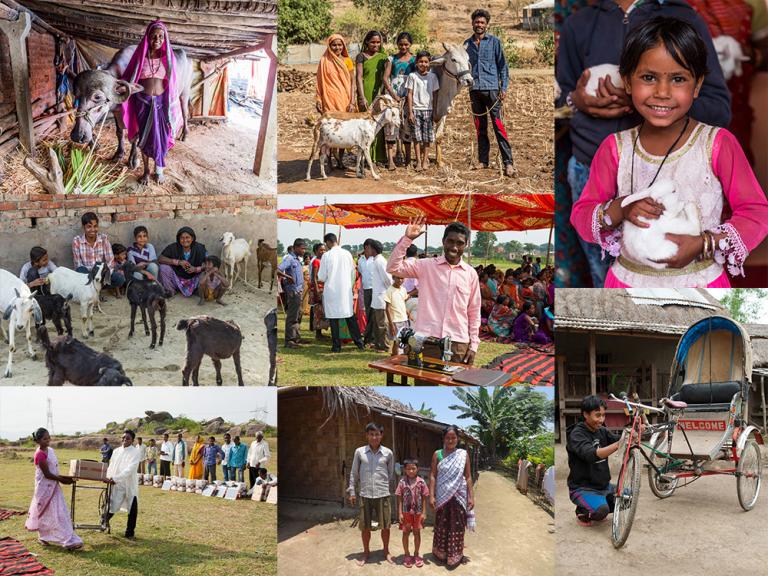 An important part of poverty elimination through income-generating gifts is not only how these practical gifts improve recipients’ circumstances but also how they restore their dignity and sense of value. Rather than leaving them dependent on future help, they are equipped and encouraged to have an active part in creating their own better futures.

Breaking the Chains of Debt

Supplies are only part of the answer to poverty, though. People need to be able to develop new skills, too, in order to escape poor-paying circumstances, in which they are often trapped because of lack of education.

With this in mind, GFA’s poverty elimination efforts include general and specific education—from literacy training to hands-on job skills like sewing and welding. Women who receive a sewing machine and begin working as seamstresses can increase their daily income to four or five times what they made doing menial labor.

But even with new skills, many people are kept back because of lack of access to opportunities to better themselves; for example, banks have traditionally been reluctant to provide loans to those without some financial stability and collateral. That severely limits opportunities for self-advancement in places like Pakistan, where only 1 in 5 adults—and just 1 in 14 women—has a financial account.

As a result, people have been forced to turn to the informal money lenders when they need to borrow money, leaving them open to being taken advantage of financially. Exorbitant loans have fueled the bonded labor population, estimated to be around 20 million—most of them in South Asia. Typical of the victims is Haresh, who borrowed around $110 from a local landowner to get married.

Subsequent loans for basics like medicine and repairs to the family’s hut, along with interest that topped 100 percent a year, forced Haresh and his family into working 14-hour days with barely enough food and water and little hope of ever being free.

Twenty years later, he and his wife, together with their married children, still worked at a brick kiln for the man who gave them the loan.

“One day my grandchildren will work for the landowner,” said Haresh. “There is no way to repay these debts. We will only be free when we die.”

Such all-too-common stories provided inspiration for the microloan or microfinance movement born in the 1970s that sought to provide access to financial resources for the disenfranchised, especially women. Muhammad Yunus founded what became the Grameen Bank in the 1970s, making small loans to women in Bangladesh.

The idea has since spread to other parts of the world, with Yunus and Grameen jointly being awarded the Nobel Prize in 2006 for their part in developing micro-credit into “an ever more important instrument in the struggle against poverty.” Many organizations have embraced a similar model, including GFA’s field partners, which provide small loans to help women start income-generating projects.

With financial institutions also recognizing a market for small loans, microfinance has collectively grown from its small beginnings and has become a big business. According to the Institute for Microfinance Research, there are more than 75 million micro-borrowers worldwide.

“Using a low-cost microloan to repair a leaky roof, purchase school clothes for their children, maintain a farm and keep food on the table, or pay off a hospital bill can give poverty-stricken communities a fighting chance,” says the group. “Microloans in the form of farm financing have proven doubly effective in that both increased income and food supply are provided as a result of the loan.”

However, not all of the early promise of microfinance has been realized. While a study by big bank ING of small loans in India and Ghana found “many positive effects from having access to financial services,” it also concluded that “microfinance is not the silver bullet to poverty elimination it once promised to be.”

The fact is that poverty is this massive, incredibly difficult problem. There is no silver bullet.

However, in the opinion of Simone Schaner, an economist at Dartmouth University, while microloans may not have proved to be as transformative as initially hoped, neither should they be written off.

“Microfinance is a victim of an unfortunate tendency in development, which is that everybody wants to find a silver bullet to solve poverty,” she said. “And the fact is that poverty is this massive, incredibly difficult problem. There is no silver bullet.”

The microfinance movement was shaken by a crisis in one of India’s states in 2012, when a string of suicides among small loan recipients was linked to high interest rates, prompting the state to ban the practice there. Yet two economists who looked into the consequences of that move found the loss of credit had a measurable impact on the overall economy.

“Because people had less money to spend, consumer spending, investment, and entrepreneurship also dropped,” Emily Breza and Cynthia Kinnan noted in their report in 2018. The episode showed that “microfinance, despite its small loan sizes, can have meaningful impacts on rural economies.”

This Special Report on poverty elimination originally appeared on GFA.org.

February 25, 2020
A Twisted Wish: Waiting for Her Husband to Disappear | Gospel for Asia-supported Bridge of Hope
Next Post