This post is part of a blog challenge series, 30 Days of Devotion to Hekate.  We’re on day 10 now and looking at offerings for Hekate, historical, SPG (Shared Personal Gnosis) and UPG (Unverified Personal Gnosis).

This will likely be a pretty short post, it’s not like I can have a huge discussion about offerings, especially when I have already made a few about Hellenic offerings in general which certainly apply to Hekate as well.  I suggest having a read of those posts on Sacrifice, Offerings and How to Offer in addition to this post – at least, if you are Hellenic or wish to honour Hekate as a Hellenic deity rather than the way you honour deities in your own tradition.

I am going to mix up the historical offerings and SPG offerings – those that a large number of modern Hekateans agree upon.  I will divide by food offerings and non-food offerings instead.  But as a note, the traditional offerings are pretty simple – garlic, leek, eggs, red mullet fish, cakes and breads, sheep and dogs, and lizard.  Plus the generic Hellenic offerings of olive oil, milk, honey, barley, and wine.

If leaving these outside, please consider the wildlife – some foods good for humans are poisonous to some animals.  And you don’t want to attract dangerous wildlife.

Not so Edible Offerings

These are offerings that are left on the shrine long term.  If leaving these offerings outside, please only leave things that don’t interfere with nature – iron keys are a no, horse hair should be fine.

There are more of course, it’s probably not possible to find out all of the UPG and SPG offerings that exist, let alone the historical ones.  In this case I have to say, Google really is your friend – when it comes to offerings, modern is just as good as historical.  And if you offer something and She doesn’t like it, She will let you know and you can refrain from doing so again in the future. Divination on the matter would be good too. But, I have never heard of anyone having a hard time because they gave Her the wrong offering!

17 – How does this deity relate to other gods and other pantheons?
18 – How does this deity stand in terms of gender and sexuality? (historical and/or UPG)
19 – What quality or qualities of this god do you most admire? And find the most troubling?
20 & 21 – Art and music that reminds you of this deity
22 – A quote, a poem, or piece of writing that you think this deity resonates strongly with
23 – Your own composition – a piece of writing about or for this deity
24 & 25 – A time when this deity has helped you, and refused to help
26 – How has your relationship with this deity changed over time?
28 – Something you wish you knew about this deity but don’t currently
29 – Any interesting or unusual UPG to share?
30 – Any suggestions for others just starting to learn about this deity? 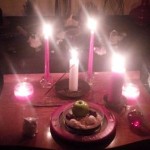 August 11, 2016 30 Days of Hekate: 11 - Festivals and Sacred Days
Browse Our Archives
Related posts from Hearth Witch Down Under