Understanding Honor and Shame in Any Context

Understanding Honor and Shame in Any Context June 6, 2013 Jackson Wu

In the third major section of Saving God’s Face, I try to grasp the inner logic of face, honor and shame. 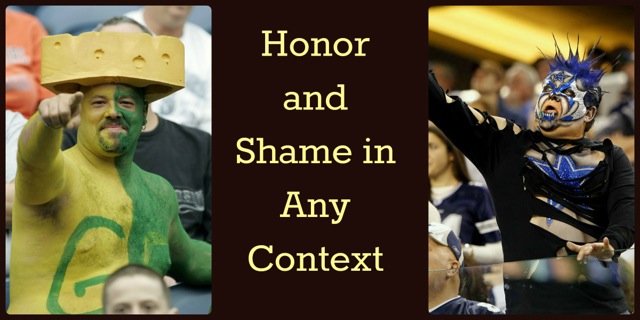 Here are some of the questions I explore:

How do honor and shame shape what one thinks is moral and immoral?

Should “honor-shame” be contrasted with “law”?

Is honor-shame an “Eastern” idea?

Does honor-shame thinking reduce to relativism, as is commonly supposed?

Can we treat “glory” and “honor” as synonyms?

What role do honor and shame have in the Bible?

With respect to honor, shame, and “face,” what does the Bible, ancient biblical cultures, and China have in common?

There are a lot of misunderstandings when it comes to the subject of honor-shame, i.e. “face.” As a result, we tend to either misinterpret the Bible or simply overlook its obvious teachings on the matter. Whenever this happens, our theology is bound to be stunted and overly biased reflect the values of a particular culture

“Honor,” in the West, is thought to concern chivalry and the like. This is an overly reductionistic perspective that blinds people to how concerns about “face” influence every person in the world every day.

Even God cares about saving face

Honor and shame are central questions in the past and the present. To be human is to be care about one’s face. Even God cares about saving his face. That in part is why I named my book Saving God’s Face. God wants to manifest his glory so that he would be honored as Father and King in all the cosmos. As creatures made in his image, we are most fully human when we reflect his honor in the world. To the degree that we disregard the Creator’s worth, we are shameful. To use more familiar language, we fall short of God’s glory (Rom 3:23).

Therefore, it’s a little too simple just to say that we should not seek face because that is “sin.” Likewise, we also can’t reduce the desire for honor/glory to sheer “pride.” With respect to God seeking honor, Piper has explained why God is not a “megalomaniac.”

I often tell people that when thinking of “honor-shame,” they should immediately think of collectivism (as opposed to individualism). That reorientation helps us see the significance of “face” issues. Naturally, we notice how honor and shame influence one’s sense of identity, view of morality, and understanding of countless concepts in Scripture.

Honor and shame are concepts that only exist in relationship with others.

A community makes judgements about what it regardeds as worthy of praise or criticism. This does not mean that a theology of honor-shame is bound to be relativistic. Rather, we have to recognize that what God regards as honorable and shameful is exactly that which should mark the Church. Accordingly, the Christian view of honor-shame also has a communal orientation.

“Bless those who persecute you” (Rom 12:14) and “count others more significant than yourselves” (Phil 3:3) are the true marks of God’s people. These are what define honor and shame for the Church. Simply because Christ is the head of the Church does not make honor-shame any less collectivistic in orientation.

Honor and shame touch every sphere of our lives

In many ways, honor and shame provide us with a more holististic perspective.  Consider two things.

“Shame is the fear of disconnection— the fear that we’re unlovable and don’t belong” (Daring Greatly, 109).

No one wants to be isolated, disconnected, and unloved. Relationships drives us, whether positively or negatively. No matter how you define “shame,” it matters to everyone.

Second,  honor-shame is not a merely an “Eastern” idea.

TV––Why do people want to be on American Idol or Reality TV shows? Do the words “shame” and “Jerry Springer Show” have any relationship?

al Movements––Princeton professor Kwame Appiah, in his book The Honor Code, argues that various social movements in history occurred in large part due to the role played by honor and shame. These include the end of the slave trade, foot binding, and dueling.

World Events––One often hears of “honor killings” in the Middle East and ways that honor-shame are influencing conflicts around the world.

AIDS — In my book, I recount how honor-shame has negatively affected the AIDS problem. Fear and stigma surround the subject such that even health professions suffer discrimination by those around them.

Counseling––This one is rather obvious. I have found no one better on this subject that Brene Brown. I highly recommend her book Daring Greatly.

Theology––I’ve written plenty on this already. Check out Saving God’s Face for more.

June 5, 2013
"What Does It Mean to Contextualize the Gospel?" by Werner Mischke
Next Post

The Great Reset Is Coming!
Roger E. Olson
Books by This Author Books by Jackson Wu

on the Advent of Hope
Many blessings to you and yours this Thanksgiving and Christmas season!  The...
view all Evangelical blogs
What Are Your Thoughts?leave a comment
Copyright 2008-2020, Patheos. All rights reserved.