How God Uses Disability for the Sake of Global Missions

How God Uses Disability for the Sake of Global Missions June 30, 2020 Jackson Wu

“How do honor and shame relate to people with disabilities?”

That was the first time someone had asked me that question. And I didn’t have a good answer. I met that question-asker, Nathan John, at a conference and immediately realized how little is written about the relationship between honor, shame, disability, and mission.

Fortunately, Nathan recently co-edited a book that looks at how people with disabilities contribute to the work of global missions. It’s called Disability in Mission: The Church’s Hidden Treasure. Many people think of ways to serve those with disabilities. However, in this book, the contributors highlight the work being done by disabled persons.

Nathan has worked in health and development in Africa, Fiji, East Timor, PNG, Bangladesh, Nepal, and India. He established Engage Disability, a network of disability providers across India. His firstborn daughter has a profound developmental disability, giving him a personal as well as professional interest in this area.

In this post, I want to spotlight one particular chapter in the book. It describes a ministry that will empower you to think creatively.

Paraplegia with a Purpose

Barry Funnell is the author of Chapter 5. His story begins with his studying to become a dentist in the early 1980s. An accidental fall severed his spinal cord in 1982, but he managed to qualify as a dentist in 1986. After several years, Barry grew discontent with the suburban lifestyle and wanted to find ways to impact the least reached populations of the world. Over the years, he gained an insatiable thirst for Scripture. He wanted others to have access to it.

He initially worked with Africa School of Missions, using his medical skills to reach the rural, economically challenged peoples. Barry writes candidly about the difficulties, including the challenge of using the bathroom in remote settings. He explains,

A major part of my rehabilitation was gaining the ability to empty my bladder via self-catheterization, and also to evacuate my bowel manually. I can say this was, and still is, the most difficult and awkward aspect of paraplegia. (p. 61)

Many people advised him against such work. Yet, he found that his disability opened doors not afforded to others. For example,

There was still rioting and unrest from Apartheid, and people had only recently been burned to death with the famous car tyre necklacing. White people were considered enemies of the blacks in South Africa, but here again, I believe my being in a wheelchair was a tool of reconciliation which God used. I came in my weakness and disability to bring a message of God’s love, and we were never threatened or disturbed. (p. 67)

Eventually, he wanted to join the School of Bible Translation. Don’t forget–– his legs might not work, but his mind remained as sharp as ever.

If you know anything about the work of Bible translation, you’ll know this: it typically requires you to go to people in remote places and who speak little known languages. One must learn the biblical languages and local languages. As a result, Barry and his family had to traverse inhospitable terrain across thousands of kilometers to reach the people they’d serve in Malawi.

He does a good job explaining why he and others like him are well suited to work in this ministry. He says,

Bible translation is an ideal ministry for people with physical limitations, as a lot of time is spent working with computers and teaching and mentoring the translators. It is a privilege to spend so much time in the Scriptures, as well as to ensure that the translation is accurate, clear and natural in the receptor language. It is not a physically demanding job, but more academically challenging. (p. 68)

Over the years, he learned that he is dependent on others (as indeed we all are). He embraced weakness as a means of seeing God show off his power. He brought this mentality to the work of Bible translation. From the beginning, Barry determined that he would train local, native speakers in the principles of exegesis and Bible translation. His work on the Sena language Bible was finally published by the Bible Society of Malawi in 2006.

He was not content to stop there. He later moved to Tanzania and started 10 Bible translations. All of 10 languages had a version of the New Testament published in 2016.

In effect, the book presents a theology of human weakness. More specifically, it expounds on various ways that God chooses to manifest his strength through our weakness. The various contributors in the book confronting the stigma or the feeling of shame that often accompanies people with disabilities.

We should assist people with disabilities as they need help. But let’s not stop there. How might we equip and empower disabled people to serve in God’s mission? 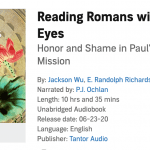 July 1, 2020 Reading Romans is now an audiobook!
Recent Comments
0 | Leave a Comment
"I cannot possibly reply adequately to your comments. These are natural reactions. The authors unpack ..."
Jackson Wu Argument Culture, Not Conviction, Threatens the ..."
"Thank you for this article. I hope the book contains this famous and helpful remark ..."
Salvatore Anthony Luiso Argument Culture, Not Conviction, Threatens the ..."
"Neither Paul nor Luther can be blamed for the subjection of women in christianity. Their ..."
David Cromie Is biblical womanhood an example of ..."
"Thanks for this prompt to think if the issue in terms of syncretism. It's a ..."
Christy Is biblical womanhood an example of ..."
Browse Our Archives
get the latest from
Jackson Wu
Sign up for our newsletter
POPULAR AT PATHEOS Evangelical
1

The Institutions Americans No Longer Believe...
Cranach
Books by This Author Books by Jackson Wu