Horizontal and Vertical Individualism and Collectivism

Not all individualist cultures are the same; neither are all collective contexts the same. We know that. But what makes them different?

I’ve written much on individualism and collectivism, yet I’ve never highlighted a critical cultural dynamic long studied by social psychologists. They routinely distinguish two types of individualism (and two kinds of collectivism).

In the next post, I’ll explore how these categories affect both our understanding of honor-shame dynamics and our approach to ministry.

Many are familiar with the differences between individualism and collectivism. (For example, here and here). So why add another set of terms?

Whereas individualism and collectivism concern one’s identity relative to others, horizontal and vertical orientations stress either equality or hierarchy (status) respectively. In overly broad strokes,

What happens when these aspects are aligned? We discern a richer picture of cultures. The chart below summarizes the prominent characteristics of four cultural profiles. 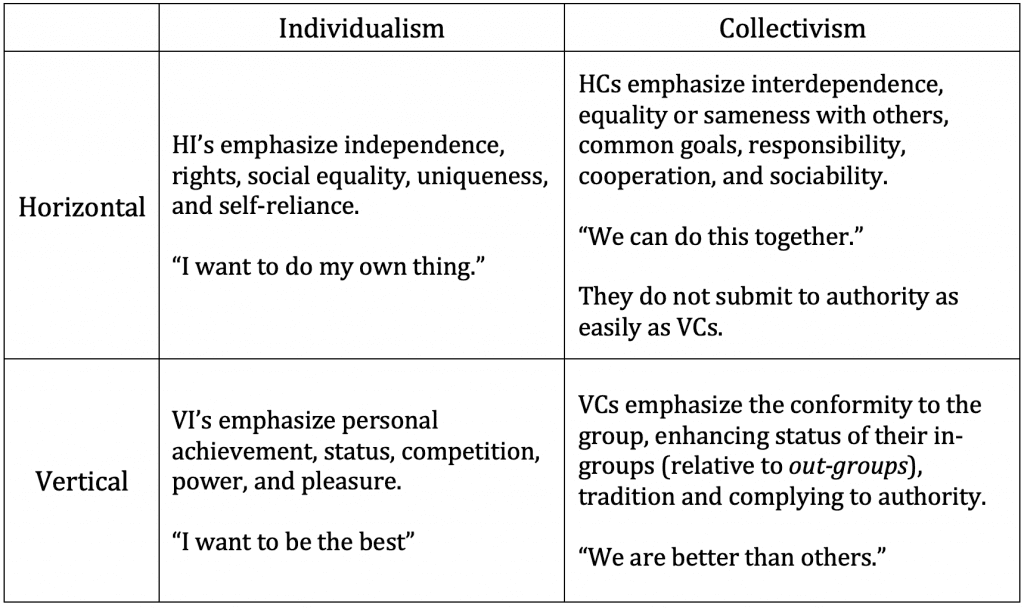 Each cultural perspective has its positives and negatives. For instance, VIs foster creativity but also stress and workaholism. While HIs are freer from group constraints, they are prone to become socially isolated. According to experts in this research, the chart below categorizes several countries by type.

Of course, these categories reflect general patterns of thinking and behavior. Individuals modify their orientation based on situation and relationship (even while the broader culture continues to influence them). For example,

Scholars have identified a range of interesting and practical correlations. For instance, both horizontal and vertical collectivism “positively predicted social distancing intentions.[2] Also, “vertical individualists (but not collectivists) appear to be affected by the conspiracy theories that are circulating about COVID-19.”[3] Not surprisingly, “individualism was positively – and collectivism was negatively – related to feelings of powerlessness concerning climate change.”[4]

Some of my favorite studies to read concerned the way advertisers adapt marketing strategies to attach vertical- or horizontal-oriented customers.

Ads in all three VC societies (Korea, Russia, Poland) and the VI society (the U.S.) evidenced a greater emphasis on status benefits than did ads in the HI society (Denmark). Indeed, status appeared to be a dominant ad theme (relative to appeals that emphasized pleasure, uniqueness, or relationships) in all of the vertical societies we examined. In contrast, pleasure appeals dominated in the HI society…

The emphasis on uniqueness in ad appeals—including depictions of differentiation, self-expression, self-reliance, and novelty—was greater in HI versus VI (and VC) cultures. These types of appeals frame the product as a form of self-expression, appropriate in cultural contexts that emphasize being distinct and self-reliant (rather than better than others).[5]

This post can only highlight select findings from a vast amount of related literature. I merely want to familiarize you with these categories in preparation for the next post, where I will speculate about potential implications for ministering from an honor-shame perspective.

[1] Nguyen Huu An. “Variations of Individualism and Collectivism Within Individuals: The Effects of Value Orientations Towards Family, Friends and Work.” Journal of Social Sciences and Humanities. Vol 4, No 2 (2018): 195-210.

October 12, 2021
How Honor Affects Our Response to Covid
Next Post

October 26, 2021 Honor and Shame in Vertical-Horizontal Individualism and Collectivism
Recent Comments
0 | Leave a Comment
"Thank you Brother Jackson for your irenic and well documented analysis of the debate about ..."
GarySweeten 9Marks is Right, but Its Arguments ..."
"Thank you for your kind encouragement!"
Jackson Wu Our new podcast is now ready!!
"I stumbled upon your podcast while looking for resources on honor / shame in the ..."
Hashim Warren Our new podcast is now ready!!
"I thought this was referring to the critique of 9Marks churches. Watermark in Dallas is ..."
Sean Dattoli 9Marks is Right, but Its Arguments ..."
Browse Our Archives
get the latest updates from
Jackson Wu
and the Patheos
Evangelical
Channel
POPULAR AT PATHEOS Evangelical
1