Why celebrate the conception of Mary?

Why celebrate the conception of Mary? December 9, 2012 Joel J. Miller

Rare is the religious image depicting a couple hugging tenderly by their bed before lovemaking, but today Orthodox Christians celebrate the conception of Mary, and the icon of the feast frankly captures her parents embracing bedside.

An icon? A feast? Because someone got pregnant? Obviously the church considers Mary’s conception of great importance. Here’s why.

Scripture repeatedly presents special children as unlikely children. Isaac, Samson, and Samuel were all miraculously born to women who long suffered the grief and disappointment of barrenness.

It’s the same with Mary.

Joachim and Anna grieved their childlessness. Eventually, their pain and frustration became acute and, according to The Protoevangelium of James, a second-century book read and circulated in the early church, Joachim fled to the wilderness to pray.

Unfortunately, Joachim was too distraught to tell his wife his plans. In her husband’s prolonged absence Anna feared the worst, leaving her to mourn both her barrenness and her presumed widowhood.

Anna’s grief became oppressive to the house, until an apparently insensitive maidservant finally urged her to get out for a walk. Anna took her advice and left for an afternoon stroll through the garden, eventually finding a seat beneath a laurel tree.

“O God of my fathers,” she prayed, “bless me and listen to my prayer, just as you blessed the womb of Sarah and gave her a son, Isaac” (Proto. 2.4).

Anna’s prayer reveals a devoted heart, one familiar with the history and tradition of her people. Anna self-consciously identified with Sarah and hoped that God would bring her a child the same way. Her hope was not in vain.

Along with Sarah, the scene of barren Anna sitting in her garden calls to mind the wife of Manoah, Samson’s mother. Scripture does not offer the woman’s name, but her story anticipates tearful Anna’s. On two separate occasions we find Manoah’s wife sitting alone in a field, her husband off elsewhere. Both times an angel appears to announce that she will bear a son.

Just as happened with Sarah and Manoah’s wife, an angel suddenly appeared while Anna rested in the shade of the laurel. Though unnamed in the Protoevangelium, the angel is traditionally understood to be Gabriel, which makes sense considering his announcing the conception of both John the Baptist and Christ.

“Anna, Anna,” said Gabriel, “the Lord God has heard your prayer. You will conceive and bear, and your child will be spoken of in all the inhabited world” (Proto. 4.1).

Gabriel did not visit Samuel’s mother, Hannah — whose name is incidentally the same as Anna’s — but her story also anticipated Anna’s, particularly her vow.

Second wife to a man named Elkanah, Hannah suffered scorn for her years of childlessness. She made a vow to the Lord: “O Lord of hosts, if thou wilt . . . give to thy maidservant a son, then I will give him to the Lord all the days of his life. . . ” (1 Sam. 1.11). The long-sought gift from God would be returned to God.

Anna’s child would likewise be set aside for the Lord, holy and sacred, separate and special.

But before that could happen, the child must be conceived. To that end, Gabriel also came to Joachim in the wilderness. He told the man his prayers were answered. “Go down from here,” said Gabriel. “Anna your wife will conceive in her womb” (Proto. 4.2).

Anna — now aware Joachim was alive and well — waited for Her husband by the gate when he arrived. She ran to him and “threw her arms around his neck” (Proto. 4.3). The text next says that they went inside. It’s like an old Hollywood scene change. We know what happens next.

A hymn of the feast captures the significance for us:

Today the bonds of barrenness are broken,
God has heard the prayers of Joachim and Anna.
He has promised them beyond all their hopes,
To bear the Maiden of God
By whom the Uncircumscribed One was born as mortal man,
Who commanded an angel to cry to Her:
Rejoice, O Full of Grace, the Lord is with You!

Christ, the Second Person of the Trinity, the Uncircumcribed One will soon become circumscribed within the womb of this woman, the long-desired daughter of Anna. That is why we celebrate. Because “when the time had fully come, God sent forth his Son, born of woman. . .” (Gal. 4.4). And here, now, finally is the woman.

As with little Samuel, Joachim and Anna dedicated Mary to the temple and presented her there when she was old enough to go — an event also commemorated with a feast. There in the temple, Mary readied herself to become a temple in full and loving service to our great High Priest.

Mary is the woman who gave flesh to the Maker of her flesh. Mary’s humanity ensures Christ’s humanity, and we are confessing the true, full, and essential humanity of Christ when we reflect upon on the humanity of his mother.

While some Christians today find Mary a bit perplexing and even problematic, Christians have long honored her memory. She was not one of the twelve disciples, but she was the first disciple. She was not an apostle, but apostles revered her. She was not a preacher, but she brought forth the Word.

To celebrate the conception of Mary is to celebrate the ineffable mystery of God’s Incarnation. And so with Anna we can say as she said some nine months later — and what else could we say? — “This day my soul is magnified” (Proto. 5.2).

So of course we celebrate. The loving union of Joachim and Anna made possible our union with Christ. Quoting another hymn of the feast:

Today the universe rejoices,
For Anna has conceived the Theotokos through God’s dispensation,
For she has brought forth the One who is to bear the Ineffable Word! 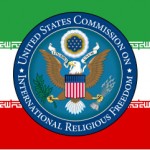 December 8, 2012
The true state of Christian persecution in Iran
Next Post 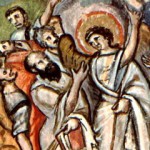 December 11, 2012 Angels: Friends of the faithful
Recent Comments
6 Comments | Leave a Comment
Browse Our Archives
get the latest from
Evangelical
Sign up for our newsletter
POPULAR AT PATHEOS Evangelical
1