Read this before you burn that picture of Jesus

Read this before you burn that picture of Jesus December 18, 2013 Joel J. Miller

Around Christmas time it’s impossible to avoid pictures of Jesus. But Megan Hill is still trying.

According to her recent post in Her*meneutics, Hill has asked teachers to excuse her kids from coloring nativity scenes and says she covers books depicting Christ in brown paper. To be clear, Hill has nothing against Jesus. She seems quite devout. Rather, her beef with his image comes from a conviction that Christ should never be depicted.

Arguing for her view, Hill says her “objection to visually representing the second person of the Trinity is not a new position. Until the late 4th century, the Christian church universally condemned images of Christ.”

This statement is false — on many levels. For starters, Roman catacombs featured icons of Christ, Mary, and many other biblical figures more than century before her “late 4th century” date. And while there is an absence of such iconographic depictions before 200 AD, they exist shortly thereafter — their absence being for reasons other than religious scruples, according to such scholars as Paul Corby Finney (The Invisible God).

What’s more, the idea of a universal ban is absurd. No church-wide council ever pronounced such a rule. And the fact that icons, frescoes, and mosaics exist in all the ancient Christian traditions to this day (Orthodox, Catholic, Coptic, Syriac, Ethiopian, Malankara, etc.) indicates an early and widespread adoption of divine depictions.

Even if there were bans, they came much later during the iconoclastic controversy in the East, and such bans were far from universal. “Controversy” indicates less than universal agreement, and, importantly, the icon-smashers lost the argument.

Hill skips that entire episode and goes straight to the Reformation. “[I]n the 16th century, many of the Protestant Reformers revived this practice [of banning images].”

That’s exactly right, as anyone unfortunate enough to get in the way could have attested. It’s one of the darker moments of the movement, evoking images of the Taliban, rather than erudite theologians and biblical scholars. Protestants swept churches clean of images, scraping frescoes off church walls, smashing icons, toppling statues, and destroying altarpieces (see Carlos Eire’s War Against the Idols and Eamon Duffy’s Stripping the Altars).

The argument for doing so then (as now) goes back to the Second Commandment — but an interpretation of that commandment divorced from over a millennium of Christian teaching and practice. From Ireland to India, Ethiopia to Denmark, Christians depicted Christ and his saints.

And none of these believers were ignoring the Second Commandment. They just understood it differently than do Hill and other Protestants. John Damascene’s Three Treatises on the Divine Images, for instance, deals explicitly with the commandment — and strongly upholds the use of images of Christ and the saints. (You can read a bit from that here.)

There is also a wooden literalism at play. The preference for the “word” of God to the exclusion of images of Christ misses the fact that dabar (Hebrew) and logos (Greek) both mean more than mere words; they can indicate an act, a way of being, an ordering principle. In other words, more than mere text.

And even text is more than mere text, as I’ve heard Fr. Stephen Freeman argue. What are letters and words but icons themselves? An icon points to a reality beyond itself. An icon of Jesus is not Jesus, but a window to him. Similarly, the word “Jesus” on a page isn’t Jesus, but a sign that points to him. It might be easy to forget this point since our alphabet is rather abstracted, but remember that the letters we use originated several thousand years ago as pictographs.

Beyond that, of course, when we speak of the word of God we are ultimately speaking of more than mere text anyway. We are speaking of Jesus, the icon of the invisible God (Col 1.15).

If we don’t want our children drawing him or book covers depicting him, that’s one thing. To marshall the history of the church to make your defense is, however, a sad errand and one that will largely disappoint.

Earlier this year, Steven Wedgeworth penned a post called “The Patristic Critique of Icons,” which attempted to show that the church fathers were opposed to images. Here’s my friend Gabe Martini’s wonderful, in-depth response. You can also listen to it at Ancient Faith.

For what it’s worth, I used to agree with Hill. Here are two iconoclastic pieces I wrote over a decade ago: “Get the Jesus Action-Figure” and “The First Coming of Huggy Jesus.” Maybe you’ll wince as much as I do. 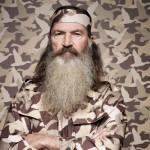 December 20, 2013 Duck, duck, goose: The real story behind the Duck Dynasty uproar
Recent Comments
20 Comments | Leave a Comment
Browse Our Archives
get the latest from
Evangelical
Sign up for our newsletter
POPULAR AT PATHEOS Evangelical
1

The 2021 SBC and the Cost...
Anxious Bench
Related posts from Joel J. Miller