Lately I’ve seen a few people on Twitter arguing about how to read Tarot cards. Some say you should always use the generally accepted meanings for the cards, while others say the standard meanings don’t matter and you should let the cards speak to you however they will. I’ve seen one side screaming “you’re creating Tarot dogma!” and the other side screaming “you’re just making it all up!”

That’s a gross oversimplification of the argument, but rather than deconstructing the “debate” (a debate I declined to participate in) I’d rather start with a clean sheet of paper. How much emphasis should we give to the “book” meanings of the cards? Where do these meanings come from? And how does all this work, anyway? 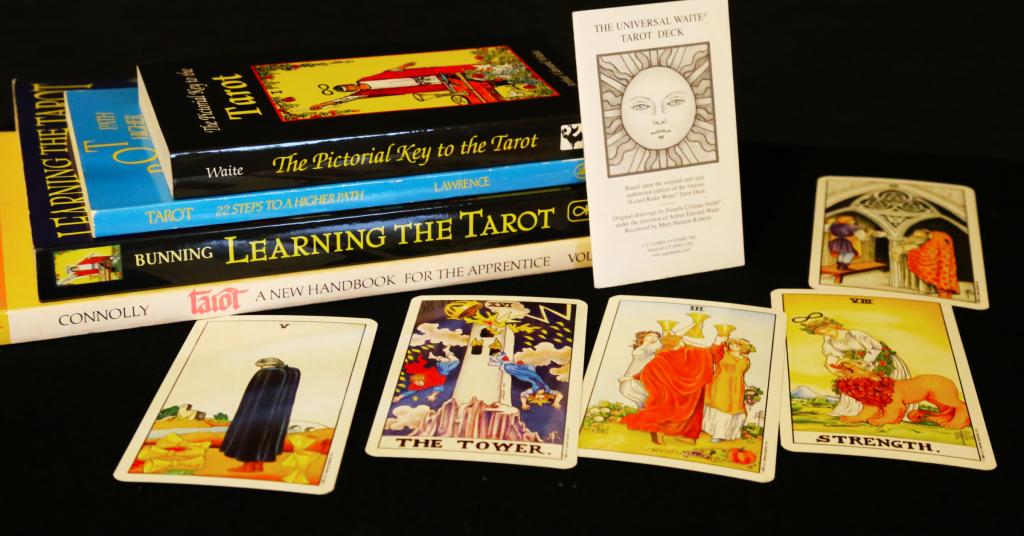 The origins of Tarot

The origins of Tarot are somewhat mysterious, but not nearly as mysterious as some claim. It didn’t come from Egypt – or anywhere else – as a divination tool or as a conduit of esoteric wisdom. Rather, it began in Italy in the late 1300s and early 1400s as tarocchi, a card game. Using Tarot cards for divination came later.

So if Tarot originated as a game, the cards could not have had divinatory meanings baked into them from the beginning (the Sola Busca Tarot may be an exception, but that’s far from certain). Further, there were many decks not just with different artwork, but with different cards. The only thing common among most Tarot decks is the structure of 4 suits of 14 cards each plus 22 trumps, for a total of 78 cards.

Many people think of the Waite-Smith deck as the “standard” Tarot, but it wasn’t published until 1909. It was designed by Arthur Waite with artwork by Pamela Colman Smith, both of whom were members of the Golden Dawn. They tried to encode Golden Dawn principles and teachings in their work and they were largely successful. However, they were working within a system that was already over 400 years old at the time. Their work was an evolution of the Tarot, not a discovery of something inherent in the Tarot.

So if Tarot has no inherent meanings – either designed or discovered – where do our generally accepted “standard” meanings come from?

From the same place all our generally accepted meanings come from – from an informal consensus of people who’ve worked with it.

Some meanings are obvious – the artwork and the name lead to a straightforward conclusion. It doesn’t take a PhD in art history to figure out that the Wheel of Fortune is about luck, random chance, and changing conditions. Others draw on archetypes rooted in the commonalities of human experience (The Moon) or on the experiences of those who created the cards (The Magician).

Tarot has never been practiced in a vacuum. Readers have always talked to each other, sometimes formally (“what do you think the King of Wands represents?”) and sometime informally (“I was doing a reading last week, and…”). Over time, we’ve come up with a collection of meanings that are accurate and helpful… most of the time. 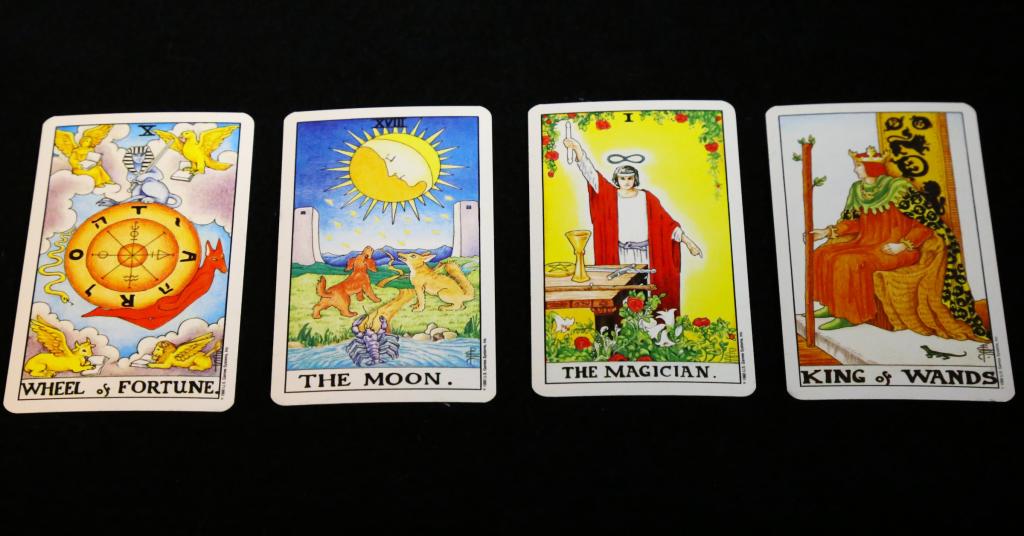 How does Tarot work?

The answer to whether cards should be read according to fixed meanings or with intuition depends at least in part on how you think the Tarot works.

One theory says that Gods and/or spirits arrange the sortilege so that the right cards come up in the right positions to give the reader the information they need. If that’s correct, then every card that comes up in a reading is there for a specific reason, and we should be aware of what those reasons are likely to be. If you’re trying to get someone to stop and all you can do is flash a color at them, you’re going to choose red – not blue and certainly not green. If this theory is correct, we should pay strong attention to the standard meanings of the cards.

Another theory says the sortilege is random, but Gods and/or spirits direct your attention to elements in the artwork or to card combinations in order to answer the question. If this is true, then the standard meanings – the consensus meanings – may provide some hints, but what’s most relevant is what we see when we look at the cards. This supports a more intuitive reading.

A third theory says that divination systems unlock the subconscious and allow us to see and know things we ordinarily could not see and know. If this is true, the archetypes illustrated by the cards may set boundaries and provide context, but the final interpretation may only be tangentially connected to the standard meanings.

So, which theory is correct? Ultimately, we don’t know – divination does not easily lend itself to scientific testing. My experience tells me it’s all of the above and the mix varies from reading to reading.

There’s a place for both approaches.

Free-lance mediumship is a thing

But I will say this: if you’re all about intuition, why bother with the cards? Free-lance mediumship is a real thing. If the spirits talk to you so clearly you don’t need cards, or if you’re able to see the future without them, just do your trancework (or however you access this… assuming you can turn it on and off… which some can’t) and tell people what you see.

A few people have that level of skill. I’m not one of them. And even when a God whose voice I know well gives me a message, I want to be absolutely sure I heard it right before I deliver it. So I draw cards. The cards confirm the message vast majority of the time, sometimes through the consensus meanings and sometimes by the connections I see in them and between them.

But if you don’t need the framework provided by the cards, then don’t bother with them. Just be a free-lance medium.

I think my biggest concern with the “we should always use the standard meanings” position is that it attempts to turn a non-verbal, non-written, non-linguistic communication method into pictograms or even hieroglyphics. And that’s a mistake.

If a picture says a thousand words – a figure of speech, but one that contains great wisdom – why would you try to restrict deep and multifaceted pictures to a handful of words?

How did our pre-human and barely-human ancestors communicate without language? As best we can tell, language is a very recent development. We have it, Neanderthals may have had it, earlier species almost certainly didn’t have it. How did they communicate without it?

Images can communicate concepts and meanings without using words. We will eventually have to put that communication into words – either for our clients or for ourselves – but when we jump to the words too quickly, we miss the rest of the message.

Look at the picture until you get the full thousand words – don’t settle for seven or eight.

With all that said, I strongly recommend learning the standard meanings of the cards first.

There is wisdom in the archetypes represented in the Tarot artwork. There is insight in their historical context. There is value in the consensus meanings developed over the years.

Beyond that, standard meanings provide structure and guidelines. As valuable as a thousand words can be, when you’re just starting out a thousand words can be overwhelming. The standard meanings can help you figure out where to look and where to concentrate. They can help keep you from going off the deep end and seeing only what you want to see, or from getting overwhelmed by your fears.

Start by learning the standard meanings of the cards.

Remember that most books and classes are focused on the Waite-Smith deck and its many offshoots. That’s why I recommend that beginners start with one of them – I used the Robin Wood Tarot for many years, and still use it frequently. If you’re using a significantly different deck, learn the meanings of that artwork. Don’t try to force the Waite-Smith meanings onto cards that are nothing like them.

I started out doing large-spread readings for general insight. That was a mistake. Ask a vague question, get a vague answer. More cards just make it more confusing.

In her excellent book Read Like the Devil, Camelia Elias says “in divination the only thing that’s real is the question, whether from the heart or some distorted illusion of the mind. The job of the fortuneteller is to answer it, regardless.”

If I was teaching a class in Tarot, I would start students out asking a very simple question – not much more complicated than “yes or no” – then drawing one card to answer it. From there we would move to 3-card spreads that can provide a little more context, and then to 5-card spreads that can include nuance and depth.

Small spreads drawn to answer simple questions will teach you the value of standard meanings – and also their limitations.

Then learn to read the cards

Once you’ve got the standard meanings down cold, you always know where to start in a reading. That confidence allows you to let your eyes wander over the cards, seeing which features seem important and which ones aren’t. You can look for combinations, repetitions, and themes.

And as you do, you’ll likely find that most times, what you read bears a strong resemblance to the standard, consensus meanings. However those meanings developed, they were retained because they proved helpful to readers over the years.

And you’ll find that your readings are more accurate, more meaningful, and more helpful to your clients and to yourself.

So, on the question of standard meanings vs. intuitive interpretations, the answer is clear: we need both.

In Defense of the Celtic Cross (January 2021) 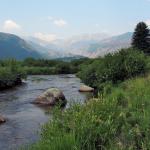 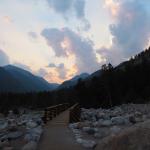