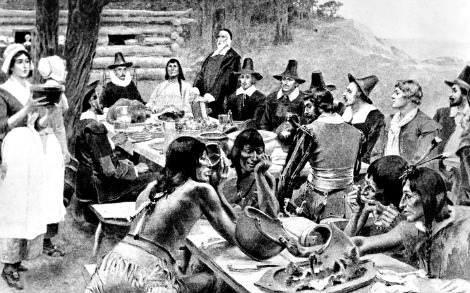 My good wife really put herself out this time! I can barely loosen my gargantuan belt buckle. Mashed wheat, grass salad, softened cinnamon sticks, potatoes with tallow sauce … . And that wonderfully delicious bird! Who would have ever thought that a creature bearing a visage so idiotic could taste so heavenly?

The Indians were jolly company today. I wonder, though, if we should have made them eat at a table separate from ours. I know the village elders decided that was best. But the village elders also decided that chimneys gave Satan a way to get into our homes. And we know how that ended up. Half of us are still sound like we have whooping cough.

The elders are wise, though. They were certainly right about burying our crop seeds a little instead of, as had been our practice, simply leaving them atop the ground. They were also right about giving alcohol to our babies. Our babies sleep so much better now! We all do.

Yet my doubts persist about having the Indians eat at a separate table. I can’t help but think of the way our Lord and Savior Jesus Christ dined with the highest and lowest of sorts. Would He have sat and cracked bread with the Indians? I think he might have.

Of course, the Indians seem to prefer their own table. For one, they have no use for our dining utensils. And, in truth, we’d have done well to master them ourselves before trying to persuade the Indians to use them. If only Wallace hadn’t stuck himself in the cheek during our demonstration—or if Smith hadn’t cracked his tooth on that spoon. How the Indians laughed. It was kind of funny. I didn’t know brother Smith could curse so prodigiously.

Sometimes, though, it seems like the Indians aren’t laughing with us so much as at us. I am certain an Indian brave today was making sport of my shoes—since he was pointing at them while nudging his companion and laughing. And I know I heard him say the word “buckle.”

Actually, they are. I confess to desiring a pair for myself. It would be a fine thing to make less noise in the forest whilst attempting to hunt. An Indian can pass through the woods as silently as a shadow.

The Indian man who snuck up on me today scared me half to death. But I guess he was just curious about my musket. They’re such an ignorant people. When I let the fellow hold my gun, he didn’t know what to do with it. He kept pointing the barrel straight at me! He didn’t even realize that’s the killing end of the thing. And he kept laughing. What a crazy laugh he had. And I wasn’t even telling a joke!

Oh, well. Patience is a virtue that all we “palefaces” are called upon to cultivate. One day, surely, the Indians will come to appreciate that we are, after all, their betters, and will bow down in gratitude to God for all that we have done for them.

P.S. I heard a new word today: satire. I have asked many about me, and curiously few seem to comprehend its meaning. 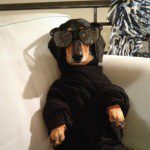 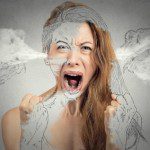 December 4, 2014 The tragedy of Christian fundamentalism strikes again
Recent Comments
6 Comments | Leave a Comment
"Even if you marry a believer, there is no guarantee they will always stay a ..."
Tracy Cowan Christians in love with non-Christians (and ..."
"good advice."
Brandon Roberts 6 truths about “forgiving” sexual abuse
"Do keep us informed of if you get accepted. It's a whole new crew at ..."
Peter J. Markavage The Bible and sex addiction
"I don't believe Freedom in Christ ministries as an organization has a residential program. However, ..."
Peter J. Markavage The Bible and sex addiction
Browse Our Archives
get the latest from
John Shore
Sign up for our newsletter
POPULAR AT PATHEOS Progressive Christian
1