Five Years in Heaven: A Young Man’s Unlikely Friendship with an Elderly Nun 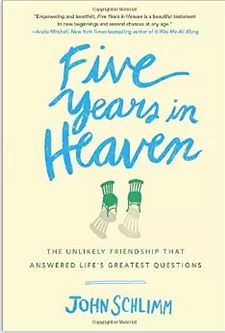 When I first saw the title of John Schlimm’s new book, Five Years in Heaven, I thought I’d be reading another in a long chain of near-death experiences:

What made each of these cases remarkable was that the patient recovered to tell some amazing stories about his experiences outside of this world.

Five Years in Heaven sounded like another of those stories–albeit a very long one.  I mean, five years!!

But no: This book is an engaging tale of friendship, an unusual friendship which developed between a 31-year-old college grad and an 87-year-old nun.

John Schlimm was at a crossroads–frustrated, confused and lost–when he first stepped into the crowded shop in St. Mary’s, Pennsylvania, where Sister Augustine created ceramic figures. Schlimm’s career had taken him to the White House, where he had served as assistant to the Second Lady’s communications director. He’d worked as a celebrity publicist in Nashville. But he yearned for something simpler and more genuine; so he took a giant leap, leaving behind job security and the big-city lights to head back to his hometown. With his friend Steven, he took a ride on the familiar roads of his hometown, heading toward the Sisters’ 150-year-old convent, where Steven introduced John to the ceramic shop.

John had been to the convent’s gift shop years earlier, with his mother; but he was surprised to learn that there was a ceramic shop on site, where he imagined rows of nuns crafting the figurines and ornaments and baubles which were sold in the gift shop. There he met Sister Augustine, an elderly but very talented woman whose creativity caught John by surprise. The two began to talk; one visit turned into two, then more than a hundred weekly visits, during which the two discussed art and business and the Christian life. Sister Augustine peppered her conversation with pithy sayings, wise words that John took to heart. “When we clear away the physical clutter around us,” Sister Augustine said, “we set our spirit free on the inside as well.”

She reiterated the theme another day:  “Never underestimate the power of simplicity,” Sister Augustine grinned. “It can free your mind and heart, and it can help you to see what you never knew was right there in front of you the whole time.”

When the greenwear Sister Augustine had crafted broke in the kiln, she approached the situation with patience and acceptance. As she picked up the shattered clayware, she’d reflect:

“Each broken piece presents a moment for me to pause in gratitude. I wouldn’t otherwise have all those extra moments of gratitude if the original piece emerged untouched from the kiln. It’s God’s way of slowing me down from time to time to focus on what’s really important.”

Schlimm kept up his weekly visits, admiring the vibrant colors on what Sister Augustine called her “Gussie bowls” and allowing her holy acceptance of God’s will to transform his own restless spirit. Her colorful ceramics, and her carefully chosen words, carried a deeper meaning. “When you free this mold from all its bindings and you open it,” she would say, “that’s when you see what the real purpose is inside.”

And John would understand that he needed to look a little deeper into himself, too–that when he didn’t get a job as he’d expected, or each time he exchanged anger, fear and confusion for gratitude, he removed another restraint that was holding him back.

Sister Augustine had much wisdom to offer to John Schlimm. And he, in his generosity, has shared that wisdom with his readers in this delightful story. Schlimm departed from his usual cooking and entertaining books to produce this deeply personal account of a friendship that spanned five years here on earth, and which continues although Sister Augustine has gone on to her reward.

Five Years in Heaven is a testimony to God’s love, which manifests itself in the love and the friendship that we share with others on our path.

May 17, 2015
Was Raul Castro Joking About His Return to the Church?
Next Post

May 20, 2015 St. Teresa of Avila's "Prayer for a Busy Life"
Recent Comments
0 | Leave a Comment
Browse Our Archives
get the latest from
Seasons of Grace
Sign up for our newsletter
POPULAR AT PATHEOS Catholic
1