Demeter reigns over the life cycle, from the fallow of winter to the bounty of the fall harvest. To the ancient Greeks, her dominion over agriculture extended her influence to civilization, including the mysteries of the life, death and rebirth. This fall, I’m honoring Demeter as a Goddess of Fury and Fertility, while following the ancient practice of creating an Inner Temple to contain my personal mysteries. I’ve included the new translation of The Orphic Hymn to Demeter that I’ll be using, along with Demeter’s themes, epithets, correspondences, animals, and more to help you connect with this impressive goddess.

She is above all else, Fierce Goddess in Control and not a timid deity at all. Honestly, when I see her portrayed as such, it really gets to me. Demeter, like her daughter Persephone and their companion, Hekate, is so often reduced to a narrowly defined weak or undesirable character. All three were revered as Soteira (Liberator). Both Demeter and Hekate were viewed as Kourotrophos, Guardian of Children.

I wish I could yield my magical golden sword to cut through these inaccurate portrayals, perhaps this article will help expand understanding of Demeter. She reminds us that we need to intentionally cultivate what we seek to grow and to impose order on chaos, whether it is all of humanity or our personal lives. She intimidates me far more than either Persephone, the goddess I feel closest to, and Hekate, who is my matron.

Demeter has no patience for weakness and does not suffer fools. She speaks to us, if we will only listen, telling us that we must develop our own thesmoi, what we call boundaries, in order to live a productive life. True understanding of the mysteries, the secrets of life and death, comes not from cavalier attempts but through rigorous self-discipline.

Her major themes beyond control include: civilization, determination, fertility, harvest, the life cycle, resistance, uncertainty and wholeness. Her act of resistance regarding her daughter’s marriage eventually resulted in the ordered structure of Persephone’s trek and the resulting annual seasonal cycle, permitting agriculture and civilization to flourish.

Her fury at the lack of order (when Persephone was abducted in particular but also in other stories) relates directly to her role as a Fertility Goddess.

About Cyndi
Cyndi Brannen is a witch and spiritual teacher, a trained energetic healer, psychic and herbalist. Merging together her training in shamanism, Tarot, past life work, meditation and psychology, she teaches and writes about better living through witchcraft. She founded Open Circle Witchcraft about a decade ago now offering online courses, including Hekate's Modern Witchcraft. Keeping Her Keys: An Introduction to Hekate’s Modern Witchcraft explores Hekate from her ancient origins to modern understanding through magic and personal development is available now for pre-order from Moon Books. True Magic: Unleashing Your Inner Witch uses the magic of the elements and the three realms to activate your true witch powers and will be available later in 2019 from Moon as well. Connect with her on Facebook or at keepingherkeys.com to learn more about her teaching and writing. Cyndi lives in rural coastal Nova Scotia with her two sons where she can often be found wandering the cliffs or wild foraging plants. She lives what she teaches: fierce love, emotional courage and true magic. You can read more about the author here.
Previous Post 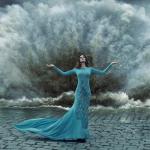 September 17, 2018
Recent Comments
10 Comments | Leave a Comment
"Cyndi, that was amazing! I really needed to hear all of that! I'm only just ..."
Chris Ayers Leaning Into Hekate’s Crossroads During COVID-19
"I just found this post 2 years later and I’m going through my spiritual awakening/rebirth. ..."
Spookybookie The Witch Reborn in Autumn: Spiritual ..."
"There seems to be no ritual attached via the link. I'd love to see it ..."
PPingrey Meeting the Wise Woman of Winter: ..."
"Imagine in 100 or 200 years what tripe from our popular culture will have stood ..."
JenniWest Welcoming The Witches’ New Year With ..."
Browse Our Archives
get the latest updates from
Keeping Her Keys
and the Patheos
Pagan
Channel
POPULAR AT PATHEOS Pagan
1

Connecting to Gods for Whom There...
John Beckett
Related posts from Keeping Her Keys