Some Christians Say Franklin Graham Should Be Told, “You’re Fired!” 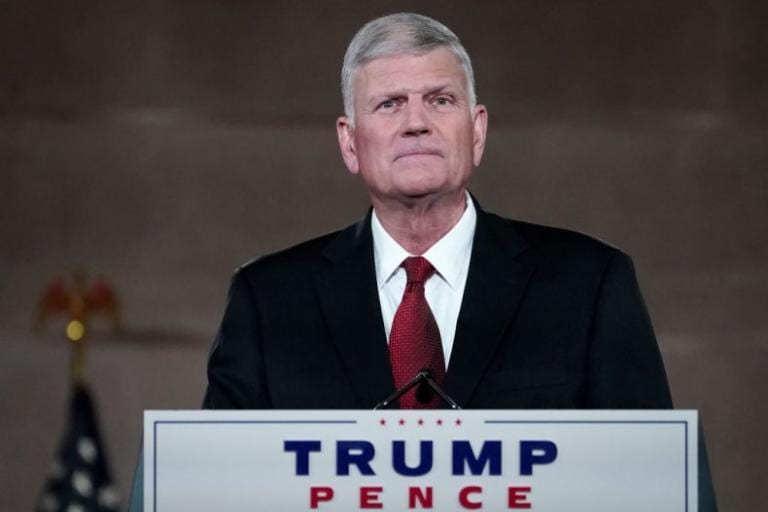 Newsweek published an article three days ago entitled “16,000 Christians: Fire Franklin Graham for Helping Incite ‘Capitol Riot.'” I’ve blogged (see below) a few times about this son of famed Evangelist Billy Graham (now deceased) and Franklin’s unswerving, vocal support of Donald Trump as president, even repeatedly claiming God made him president. It gives me no pleasure to speak out against the son of Billy Graham. Billy was a friend of mine and endorsed the back cover of my first book. But I feel that I should do so since I believe Franklin’s strong endorsement of Trump as president has been having a negative effect in America regarding the gospel (=good news) of our Lord Jesus Christ.

Franklin Graham was one of several Evangelical and Pentecostal leaders who very publicly endorsed Donald Trump as president, and he has continued to do so to the bitter end of Trump’s presidency. Yet Trump’s values and lifestyle have been strangely far apart from those purported by these people. For instance, Franklin gave the invocation last summer at the Republican National Convention. And Graham has been very vocal in subscribing to now former President Donald Trump’s false allegation that the election he lost to now President Joe Biden last November was “a fraud,” “rigged,” and “stolen.” Yet there was no evidence of any such thing, which all fifty states and nearly sixty court cases verified.

A petition recently was circulated by an online organization called Faithful America that garnered 16,000 signatures. This group claims to be the largest online community of Christians in the U.S. advocating for social justice.

Franklin Graham is the president and CEO of both the Billy Graham Evangelistic Association and the international, humanitarian, relief organization Samaritan’s Purse, which latter he founded. The petition by Faithful America reads, “As long as Samaritan’s Purse and the Billy Graham Evangelistic Association stand by Franklin Graham, it must be said that these once-vaunted organizations have forgotten their original Christian missions, abandoned the Gospel of Jesus Christ, and are complicit in the spread of dishonest, discredited election conspiracy theories and the deadly, unpatriotic, white-nationalist terrorism at the U.S. Capitol incited by those lies.”

The petition was sent to the board of directors of these two organizations. It concludes, “Our faith in Jesus Christ demands that we do better than this. Your fellow Christians from across the country call on you to fire Franklin Graham, or to resign from the Board in individual protest.”

Paul Saber, a board of director member of both Samaritan’s Purse and the BGEA replied to the petition by saying both boards “have expressed that they fully support Franklin Graham and are more than satisfied with the job he has done and is doing in leading these ministries to bless people in over 100 countries around the world.”

Franklin Graham has defended his endorsement of Trump as president by saying, “Never in my lifetime have we had a president willing to take a strong, outspoken stand for the Christian faith like President Donald J. Trump has.” Perhaps so. But why did he do it since he doesn’t give evidence of being a Christian, much less claiming to be one? I think it obvious that the relationship between Evangelicals/Pentecostals and Trump was transactional, with them helping a lot in putting him in the White House if he would select conservative judges and oppose abortion, which he did.

Jerushah Duford, the granddaughter of Billy Graham, spoke repeatedly in opposition to her uncle Franklin Graham’s endorsement of President Trump. She has praised him for his relief work but added that he should “stick to” his Christian ministry.

I have blogged that Franklin Graham appears not to have learned the lesson of his father, Billy Graham, who admitted later in life that he made a mistake in endorsing some U.S. presidents. It was mostly Richard Nixon, who became the only president to resign in disgrace because he was about to be impeached and convicted.

In a CNN interview last month, Duford lamented the direction of the evangelical movement in recent years. She alleged that it “started to really represent, actually, a branch of Christians that seemed to be a little more conservative and a little bit more hypocritical, a little bit more willing to compromise on the personal morals of a candidate in lieu of what politically they could gain for their party.” She continued, “My Jesus that I follow was really somebody who fought for the outliers, and I think that Trump has actually done the opposite in kind of ostracizing them.”

For my other blog posts about Franklin Graham, click on the following:

“Did Franklin Graham Put Donald Trump in the White House?”

January 21, 2021
Biden Is President and Trump Is Gone
Next Post

QAnon is a hoax designed for...
slacktivist
Related posts from Kermit Zarley Blog