Once upon a time there was a silly young girl who grew up to learn what it means to be a help meet – God’s secret for a heavenly marriage. I start this book with the words “Once upon a time” because it really is a wonderful story come true. It should, and could, be your story too. It is God’s gift to every woman.

This is how Debi begins her introduction to her book, Created to Be His Help Meet. I’m sure a literature major could write yards about the way she frames her work here. The use of “once upon a time” gives it a fairy tale quality, and Debi makes clear that that’s not accidental. It’s a “wonderful story” about how Debi used to be “silly” and ended up realizing that her role in life is to be her husband’s helper. What I don’t think Debi realizes is that the original fairy tales were generally dark and foreboding, not the cheerful chirping birds of the Disney versions.

Also, note that Debi wants her story to be every woman’s story. This book isn’t just meant to be a few tips women can incorporate as it works for them. No. It’s meant to be a how-to instruction manual that you follow from beginning to end.

Debi begins with the story of how she met her husband Michael. It turns out that Michael was the pastor of her church, and that he sometimes asked her to come to gospel meetings to counsel the girls while he worked with the guys.

Debi does not offer any information about how Michael became a pastor or whether he spent some of the years between age 18 (which is when she first developed her crush on him) and when he was 25. The No Greater Joy webpage states that Michael has a degree from “Mid-South Bible College,” which has since been renamed “Victory University.” The webpage does not say anywhere – and trust me, I’ve looked – what that degree was in, or even whether it was a four year degree or something shorter. A quick look at the history of the institution reveals that it was founded as a fundamentalist Bible college, that the only subject it offered until 1982 was Bible, and that the programs they offered varied from one year to four years in length.* Once Michael finished his time at Mid-South Bible College, Michael presumably returned to his home church and became their pastor.**

Next, as Debi rides along with Michael to “a Bible study with a crowd of hippies,” we get a glimpse of how Michael Pearl’s ministry began.***

This was during the height of the hippie revolution an the Jesus Movement. The birth-control pill was a new and heady thing that drove the hippies into an era of non-responsibility. AIDS was not yet a factor. The theme of the 60s was, “If it feels good, do it.” young people could be seen sleeping in parks or on roadsides, switching partners as the night progressed. Drugs dulled their conscience and destroyed their dignity, but in the midst of all this sin and shame, God poured forth his Spirit, and thousands of those heartsick kids began to seek God.”

Debi goes on to describe the gospel meeting in an upstairs apartment during which Micahel preached “the gospel of Jesus Christ” to a group of “used-up druggies.” She describes the electricity in the room as everyone “in one accord” fell to their needs to pray, with young men crying out to God for mercy.

In the midst of this movement of God, I felt my pastor reach over and take my hand. Talk about electric shock! I knew there was a strange and wonderful thing happening, because he was ordinary a real prude! He wouldn’t even let the old ladies shake his hand after Sunday morning service. Now he was holding mine during a prayer meeting! I just knew my time had come!

Now this is just … weird. I’ve never heard of a pastor refusing to to shake the hands of “the old ladies … after Sunday morning service.” As any pastor knows, those old ladies are often the core of the congregation – they’re what holds it together. The general modus operendi is for the pastor to end the service with a hymn and then walk to the doors and shake everyone’s hands as they walk out, answering questions about the sermon or taking prayer requests. Standing there greeting everyone but refusing to shake the hands of any of the women, even the old ladies is just … weird.

But anyway, back to Debi’s narrative. After seven years of silently crushing on Michael, he has taken her hand during a prayer meeting. Something is clearly afoot!

He never spoke in the hour’s drive home, and I never shut up. Always given to gab, I really gab when I’m nervous, and I was really nervous. Silence was so unusual for him, I thought I knew what was on his mind. Me! Finally we pulled up to the parsonage where he lived and where my VW Bug was parked. I sat in the darkness waiting, but … nothing …. Finally, I spoke out. “You remember that boy you baptized Sunday night, the little guy who could barely see over the top of the baptistry? Well, someday I would like to give you a little boy just like that!”

You would think a man might take a hint, but he was out of the car and running within two seconds. I got out and headed for my car, figuring I might have spoken a little too boldly. I saw him as he came around his house the first time and watched as he disappeared around it again. He made three full laps around the large parsonage before he finally made up his mind. He rushed toward me, picked me up, and threw me into the air. At that point I was beginning to doubt my wisdom and his sanity. Then he said in a loud, confident voice, “Let’s get married.”

And, so we did. Eight days later, on a Sunday night, I made my way to the front of the church building, carefully stepping around the newly-saved ex-hipppies sitting on the floor of the crowded aisle, to take the hand of my pastor-husband in holy matrimony. Thus we began our journey.

And, um, that’s not, well, normal either.

To be fair, since they had “occasionally” been doing these gospel meetings together, and since Debi attended the church Michael pastored, and since Debi had at least known of Michael’s existence for seven years, it’s not like they had just met. But getting engaged thirty seconds after learning that you both like each other back, and getting married eight days after getting engaged, that’s just not healthy. It takes time to build a relationship, and there’s loads more to a relationship than the ability to lead gospel meetings together.

And as we’ll see later, it didn’t take either Michael or Debi long to realize this.

* As is quickly evident, Mid-South Bible College followed the classic trajectory of the fundamentalist Bible college. During the first half of the twentieth century, fundamentalists founded literally hundreds of Bible colleges. Distrustful of academic learning at actual accredited institutions, fundamentalists often sent their children for a year or two of study at these Bible colleges, safe in the knowledge that their children would be attending chapel, studying the literal Bible, and, of course, carefully chaperoned. Bear in mind that at these institutions studying the Bible meant, well, studying only the Bible. Things like cultural context or textual criticism were seen as heretical and damaging to one’s faith. A person would graduate from one of these institutions not with a scholarly understanding of the Bible, the languages in which it was written, the way it was created, and the cultural contexts in which it was written, but rather with a thorough knowledge of Bible stories and having memorized a great deal of scripture. Mid-South Bible College was one of these schools.

As college attendance grew, however, and as having a college degree became more necessary and sought after, these Bible colleges had a problem. An increasing number of fundamentalist parents began sending their children to actual accredited universities that taught things like nursing or accounting. Bible college attendance began to drop. These institutions, however, were not going to roll over without a fight, and Mid-South Bible College followed the common trajectory. In 1982 it adopted a myriad of new majors and began the process of seeking accreditation. In 1987 it changed its name to “Victory University,” dropping the obvious marker of the Bible college and adopting the more prestigious title of “university.” According to the school’s website, it, like many others, transitioned “from a Bible college to a Christian liberal arts college.” But of course, all of this was long after Michael’s time there. When Michael studied at Mid-South Bible College, whether it was for one year or for four, it was a fundamentalist Bible college that only taught the Bible, and the literal and inerrant Bible at that.

** This explanation makes most sense given that Debi began crushing on him when she was 13 and he was 18, and now attends the church where he pastors. Another possibility is that she met him somewhere unrelated and then tracked down the church he began to pastor and began attending there herself. And who knows, perhaps the idea of “stalker Debi” is consistent with the fact that she’s been crushing on Michael for seven years and yet hasn’t said a single word about it to him.

*** Debi says this story begins 34 years ago, and the book was published in 2004, so presumably the event she is describing happened in 1970. It’s unclear whether Debi is describing the “Jesus Movement” or simply a revival meeting of young hippies. During the 1960s, there was an awful lot of “seeking” going on as young people disillusioned by the black and white life of the 1950s and the constant threat of nuclear war sought to find something more. This was one reason that eastern religions and the smattering cults that arose at the time became so popular, along with communes. Some of these seekers eventually came to Christianity, often drawn by the “hippie Jesus” image of the Jesus Movement. It’s unclear, like I said, whether Michael preached this “hippie Jesus” message or, as is probably more likely, a more “fire and brimstone” sermon. Regardless, what Debi describes rings true, and it is apparently here that Michael got his start in ministry.

September 27, 2012
Quiverfull families and the federal income tax
Next Post 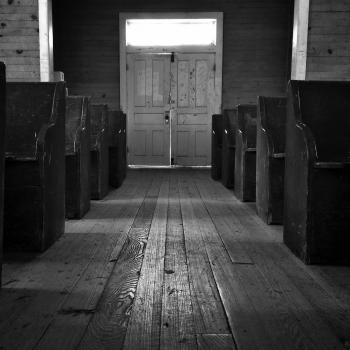 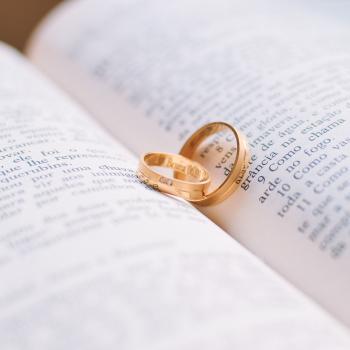 Nonreligious
To Betroth or Not to Betroth: When Courtship...
Love, Joy, Feminism
TRENDING AT PATHEOS Nonreligious