Michael Farris Admits He Messed Up

Farris was quoted denouncing the now disgraced Phillips in the World Net Daily expose. In particular, Farris claimed that he and his organization, HSLDA, had long distanced themselves publicly from Phillips because they found Phillips promotion of “biblical patriarchy” dangerous. In a post yesterday afternoon, I pointed out that this was untrue and detailed continued HSLDA support of Phillips and his organization.

I rather wonder if Farris read my post, or at least heard of it, because he has since admitted on his facebook wall that he had acted wrongly—something he did not own up to in the expose. 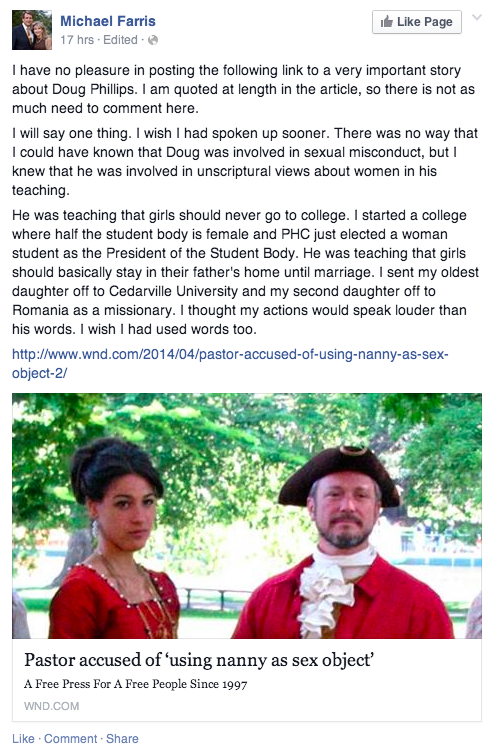 In response to comments asking about Vision Forum advertising in HSLDA publications and email alerts, something I mentioned in my post yesterday, Farris had this to say:

Some commenters pushed back against Farris, incensed by his condemnation of the patriarchy movement. Farris responded as follows: 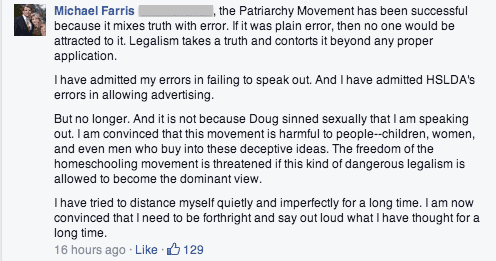 I actually think Farris means this. I actually think he realizes he should have spoken up sooner. Before these past few months, Farris has never spoken against what he here calls the “Patriarchy Movement,” and this is the first time he has done so this publicly. I think he hoped it would all just go away, but through his silence and through HSLDA’s continued promotion of Phillips and others he provided space for these ideologies to grow and thrive unchecked.

There’s something I think you have to understand. I was homeschooled K-12, and my parents would never have bought into Vision Forum if they had been warned against it by Michael Farris. My parents, like many other parents in the world of Christian homeschooling, have long looked up to and admired Michael Farris above any other Christian homeschool leader, bar none. My parents—and, frankly, I myself—believed that Farris supported the work of Phillips and others, or at the very least did not oppose it. All of these leaders and organizations ran in the same circles, spoke at the same conferences, and read the same publications. How were we to know that there were divisions or concerns under the surface?

In the comments on his facebook post, some homeschool parents castigated Farris for spreading “division.” “We need to stay united to secure our freedoms,” one woman wrote. Needless to say, this is bullshit. Unity should not be valued over people’s lives and wellbeing. Here’s what homeschool graduate Patrick McKay had to say of these claims: 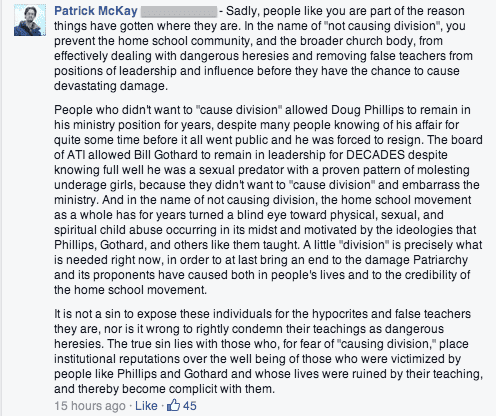 I think Farris is being sincere here, and finally being actually apologetic about his failure to speak. But honestly, there’s something about this that grates on me.

Farris has been unwilling to speak until now. Who has been willing to speak, exactly? Well, me. And Hillary MacFarland. And Ryan Stollar. And dozens of other homeschool graduates who turned to the internet in their grief and pain to tell their stories. We’ve spoken out. We’ve taken a stand. And what have we gotten from Farris et al? Well, Farris has refused to speak to anyone at Homeschoolers Anonymous, and I’ve heard rumors that HSLDA considers me a PR disaster. In fact, Farris himself has accused us homeschool-graduates-turned-activists of abusing him. We have said, time and again, what he is now saying, and we’ve called for him to say these things as well—and for what?

Farris needs to realize that we who are speaking out care as much about homeschooling’s future as he does. We have pleaded for over a year for the change he now seeks, and we did so when it was unpopular (and it is still unpopular). Farris has ignored us, blocked us, and called us “abusive” — for saying the exact same things he is now saying. The voices of students, alumni, and parents who demand better stewardship of homeschooling deserve more respect.

If only he could realize that we paved the way and stop ignoring us.

It’s hard, I suppose, to see Farris speaking on this now after how he has reacted to our attempts to do the same thing over the past few years. It’s good that he is speaking out, but I have to wonder—does this mean we’re off Farris’s bad list now?

My fellow bloggers and I have written against not only Phillips but also other leaders, including Geoff Botkin, Voddie Baucham, Michael Pearl, and Kevin Swanson. Is Farris willing to speak out against them, too? Or is he only willing to speak against fallen patriarchs? Can we at least count on him to denounce Bill Gothard, then? Given that, Farris will be keynoting alongside Voddie Baucham at the Home Educator’s Association of Virginia’s upcoming conference (more on this later), I’m not all that hopeful.

We’re in a weird position, we homeschool graduates.  We straddle worlds, and we want, we yearn, we desire. Sometimes we hurt, and sometimes we simply feel gloriously alive. But one thing we want is to do what we were raised to do—to bring change, to do great things, to make the world a better place. But our targets have shifted, and some of us have turned our gaze on the world in which we grew up, and we see problems there, mixed in with the good. But somehow, we who were so valued are no longer considered worthy to speak.

I’d like to hope that these things will change now, but I’m doubtful. I suspect instead we will watch from the sidelines while Farris goes partway, but not nearly far enough. I’m glad Farris seems to feel genuinely bad about not denouncing Phillips earlier, but if he wants to make good on that mistake he needs to speak out against other homeschool leaders who are still promoting the same ideas. He also needs to take a good look at himself and ask what part his own beliefs about wifely submission and parental rights may have played in creating a fertile breeding ground for the growth of biblical patriarchy in the homeschool movement.

I’ll finish by quoting the ever quotable R.L. Stollar: