In spite of his recent decision to speak out against patriarchy in the homeschool movement, Michael Farris will be keynoting alongside Voddie Baucham at the Home Educator’s Association of Virginia’s annual convention this June. 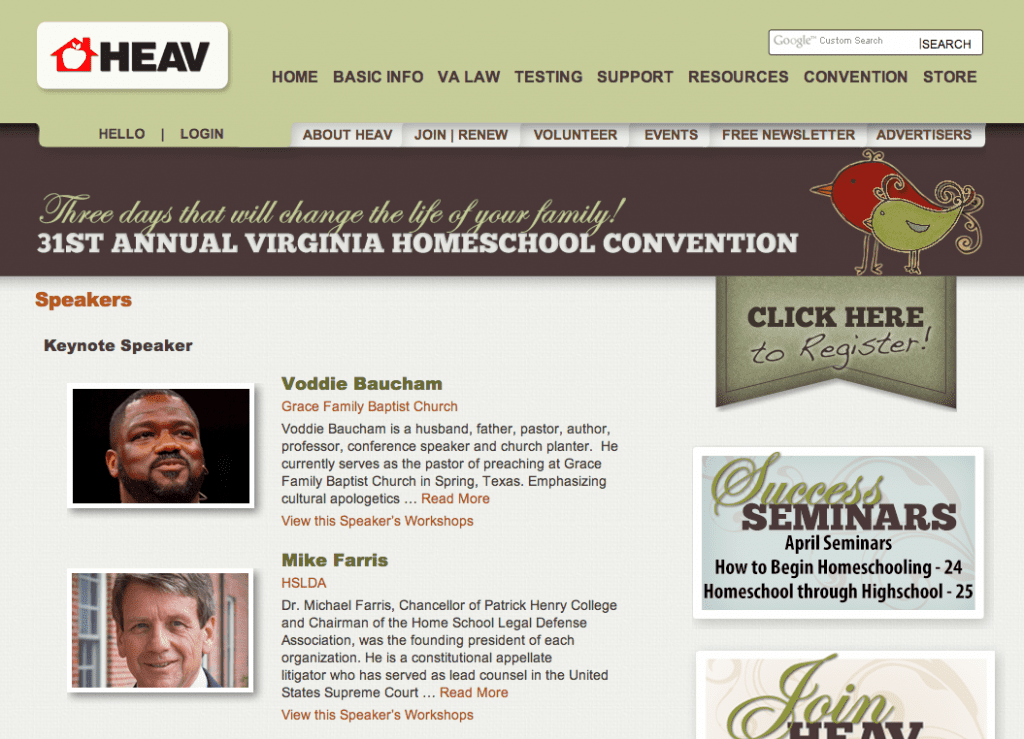 In case you’re wondering what he’ll be speaking on, well, Baucham’s keynote address descriptions are available for viewing. Everything in them, from his focus on feminism to his invocation of “multigenerational” thinking, comes straight out of the biblical patriarchy playbook and straight off the now defunct Vision Forum website.

The Role of the Father in Home Education and Discipleship

Many homeschool dads view their role as little more than providing money for curriculum. The results of such passivity are devastating: marriages are strained, homeschool boys are feminized, moms are frustrated and isolated, and feminism exploits the opening. The homeschool movement risks becoming feminized altogether, and you can (and must) do something about your own home. Hear how homeschool fathers can be more than sideline spectators or bullies who demand results. Dad will learn how to cast vision, set goals, offer support, and get involved. Mom will learn how to apply biblical principles to encourage her husband, without using manipulation or guilt, to assume his role as leader in the home.

Before we can do right, we must learn to think right. We all act in accordance with what we believe. Unfortunately, many Christians believe things about marriage, family, and children that are grossly unbiblical. As a result we simply live for today, with no thought for the consequences to coming generations. Once we grasp a multi-generational vision, the pieces begin to fall into place.

Baucham is one of the leaders of patriarchy movement that grew out of the Christian homeschooling movement. Indeed, Baucham was a close associate of Doug Phillips until recently. He has had ties to Vision Forum, speaking at their conferences and publishing his books with them. Baucham’s daughter Jasmine is a stay at home daughter who writes for Ladies Against Feminism, a website promoting biblical patriarchy.

Speaking alongside Baucham at a major homeschool convention grants him silent approval, especially in the wake of Farris’s statements about speaking out against patriarchy and no longer remaining silent. How, then, will Farris justify speaking alongside Baucham? Or will he instead decline to speak as long as Baucham is there? I can’t answer this question for sure, but I can say that Farris has already laid the groundwork for making an exemption for Baucham.

This comment was made in response to a woman arguing that there are good reasons not to send your children to college, and then citing Baucham. Farris replies by saying that, actually, Baucham has recently enrolled his daughter in college. But you can see where this logic may lead—if Baucham has enrolled his daughter in college, after all, surely he can’t be part of a movement that argues against college attendance for daughters—right?

College Plus is a Christian program that allows students to earn a degree through a state college in New Jersey that specializes in online education. The program offers students a coach to walk them through the process and encourages students to earn credit through CLEP tests. The program includes character education alongside online college courses, and has been promoted by leaders of the patriarchy movement as a way homeschool graduates can earn college degrees while remaining at home under their parents’ authority. The program has ties to ATI, and until recently its biggest promoter has been Doug Phillips. Yes, that Doug Phillips.

Until recently, Vision Forum had an endorsement page on the College Plus website, with this message from Doug Phillips:

Why I endorse CollegePlus!

CollegePlus! has my full support and recommendation as the college option that protects our children from the divisively liberal, humanist, and anti-family college system.

CollegePlus! gives students the freedom and flexibility to pursue entrepreneurship, apprenticeship and ministry opportunities while earning college credit in conjunction with high school or pursuing their fully accredited degree. CollegePlus! is the cost-effective approach to earning an accredited Bachelor’s degree without debt, compromise or dismantling the family.

You can still see the page via the Wayback Machine. You can also see College Plus’s landing page for Vision Forum visitors, complete with a special message from Doug Phillips (now defunct).

As recent as this past January, College Plus offered an exclusive webinar with five Christian leaders, Doug Phillips among them. In the past, College Plus has featured numerous webinars Doug Phillips, all now conveniently scrubbed from the College Plus website. Doug Phillips promoted College Plus avidly on the Vision Forum website, though those posts are hard to access now that that website has disappeared.

Who founded College Plus? How did these ties develop? I don’t have all of the answers to that, but I’ve done some digging. Brad Voeller, a homeschool graduate, founded College Plus in 2004 (read more here). Brad was the son of a prominent ATI family. If you have a look at this link, you’ll find that Brad’s mother Lori advocates spanking babies (“we use a 1/4 inch wooden dowel when they are 6 months”) and severely limiting her children’s playtime (“we’ve adopted the old-fashioned idea that children play on Saturday afternoon only”). Brad’s father, Jim Voeller, was ATI’s head of homeschool curriculum. The Voeller family was engulfed in scandal when Brad’s father was caught having an affair with his secretary, and his parents subsequently divorced.

Vision Forum was not involved in the founding of College Plus, but at some point Doug Phillips discovered Voeller and took his project under his wing. This shouldn’t be surprising given that it appears Voeller grew up attending Doug Phillips’ church. In fact, the ties between Vision Forum and College Plus have been so close that the two have held an annual tackle football game. You can see pictures here.

Indeed, note which organization is listed first in this listing of College Plus partners, as shown in a screenshot from last year: 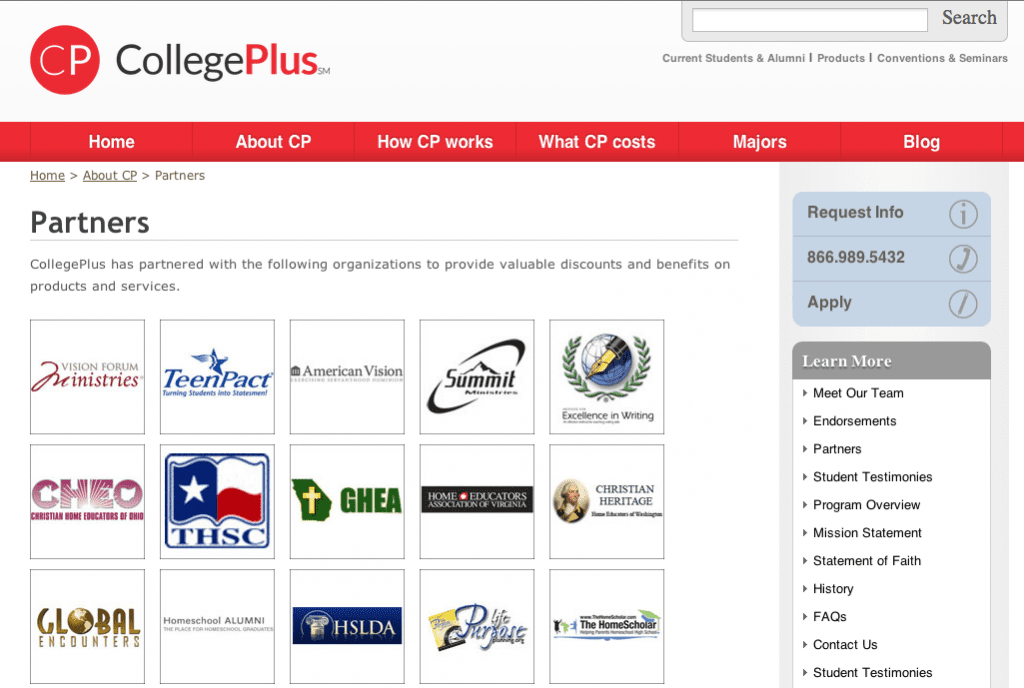 Yes, Voddie Baucham enrolled his daughter Jasmine in College Plus. He did so, though, as part of the culture of the Vision Forum—dominated patriarchy movement, not as a rejection of patriarchy. I’ve written about Jasmine Baucham and College Plus before. Jasmine is doing College Plus so that she can get a college degree while being a stay at home daughter, has has been very clear about how difficult it has been for her to give up her dreams of a career to accept her future as a stay-at-home homeschooling mother.

I’ve heard stories from homeschool graduates I know about siblings kept at home for years by controlling parents, enrolled in College Plus but in practice afforded little freedom or space to mature and become independent. College Plus enables parents in the patriarchy movement to keep their children at home and under their control while keeping up a tidy front.

In fact, I’m going to come right out and tell a story I don’t think I’ve told before. My parents wanted to enroll one of my younger brothers in College Plus rather than sending him away to college. They tried to talk him into it with promises that he could get a bachelor degree in only two years, but the real reason they wanted him to do College Plus was that he was the “rebellious” son and they were afraid that if they sent him off to college they would lose control over him completely. At this point my brother came to me, and I became his high school guidance counselor. I helped him choose a brick-and-mortar college and find a way to pay for it. He is in college today, living away from home, and is excelling by every measure.

If anything, Baucham’s decision to enroll Jasmine in College Plus only confirms is positioning in the center of the patriarchy movement. Like Phillips, Baucham too has webinars on the College Plus website, and has endorsed College Plus on his own blog. “We’ve got to stop making the pagans in the college system rich while they make us dumb,” he wrote.  Or was that Doug Phillips?

And so we come to the question. Will Farris speak alongside Baucham, keeping silent about any disagreement he may have and explaining Baucham out of the patriarchy movement? Or will he put his money where his mouth is? 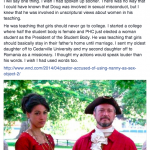 April 16, 2014
Michael Farris Admits He Messed Up
Next Post