I have a friend who was raped by a friend of hers—someone she had had sex with before. It’s just that this time, she said no, she wasn’t up for it at the moment, and he didn’t stop. It wasn’t “violent”—she basically disassociated and laid there in shock that this was happening to her. He was someone she had trusted. This experience led my friend into some risky behavior—she figured there wasn’t any point in keeping herself safe, as there was no “safe”—and ultimately put her into therapy with serious PDST and terrible, incurable nightmares. She recently told me she doesn’t think marriage will ever be in the cards for her—because of this one experience. It has affected her that strongly.

I say all this as a preface to this: 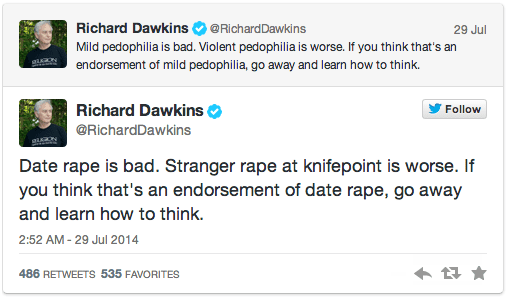 Richard Dawkins has become widely known for putting his foot in his mouth on subjects like this. Not surprisingly, Dawkins is wrong—very wrong. By and large, the harmfulness of rape is in its violation of women’s consent. That violation is present whether or not a knife or stranger are involved. In fact, for some women, like my friend, date rape is compounded by the fact that the perpetrator is someone they trusted. And then there’s also the fact that women often process and work through their rapes very differently. Being raped by a friend may affect a given woman differently than it would her sister, etc.

Frankly, Dawkins doesn’t sound like he knows much more about rape than Todd Akin or any of the other Republican men who commented disastrously on rape in the last election cycle. Instead of pontificating on rape, men like these need to listen to women who have experienced rape, to therapists who work with rape victims, and to activists working to prevent rape and help survivors. This way they might actually learn something rather than putting their feet in their mouth making ignorant and harmful statements on the subject.

After all, what Dawkins said isn’t just wrong, it’s also harmful. How do you think my friend would experience Dawkins’ comment—my friend who was so traumatized by her rape by a friend that she has PTSD and is afraid to sleep for the nightmares? Creating a hierarchy of rape—categorizing it by harm—is not helpful for survivors. The harm caused by rape is so variable that telling victims that what they experienced was “worse” or “better” than what other victims experienced cannot help but complicate the healing process. It suggests that some suffering is more legitimate than other suffering.

Frankly, we need to stop putting qualifiers in front of rape. “Legitimate rape.” “Date rape.” “Stranger rape.” “Forcible rape.” How about just “rape rape”? The qualifiers cause problems, because they suggest you can set up a hierarchy of damage when you simply can’t.

But let’s get back to Dawkins, because rather than listening to responses to his comments, rethinking his views on rape, and apologizing to those he harmed, he dug in.

I hope I have said enough above to justify my belief that rationalists like us should be free to follow moral philosophic questions without emotion swooping in to cut off all discussion, however hypothetical. I’ve listed cannibalism, trapped miners, transplant donors, aborted poets, circumcision, Israel and Palestine, all examples of no-go zones, taboo areas where reason may fear to tread because emotion is king. Broken noses are not in that taboo zone. Rape is. So is pedophilia. They should not be, in my opinion. Nor should anything else.

I didn’t know quite how deeply those two sensitive issues had infiltrated the taboo zone. I know now, with a vengeance. I really do care passionately about reason and logic. I think dispassionate logic and reason should not be banned from entering into discussion of cannibalism or trapped miners. And I was distressed to see that rape and pedophilia were also becoming taboo zones; no-go areas, off limits to reason and logic.

“Rape is rape is rape.” You cannot discuss whether one kind of rape (say by a ‘friend”) is worse than another kind of rape (say by a stranger). Rape is rape and you are not allowed even to contemplate the question of whether some rape is bad but other rape is worse. I don’t want to listen to this horrible discussion. The very idea of classifying some rapes as worse than others, whether it’s date rape or stranger rape, is unconscionable, unbearable, intolerable, beyond the pale, taboo. There is no allowable distinction between one kind of rape and another.

If that were really right, judges shouldn’t be allowed to impose harsher sentences for some rapes than for others. Do we really want our courts to impose a single mandatory sentence – a life sentence, perhaps – for all rapes regardless? To all rapes, from getting a woman drunk and taking advantage at one end of the spectrum, to holding a knife to her throat in a dark alley at the other? Do we really want our judges to ignore such distinctions when they pass sentence? I don’t, and I don’t think any reasonable person would if they thought it through. And yet that would seem to be the message of the agonisingly passionate tweets that I have been reading. The message seems to be, no, there is no spectrum, you are wicked, evil, a monster, to even ask whether there might be a spectrum.

I am very uncomfortable any time someone appeals to “logic and reason” and dismisses “emotion” as a way to silence critics. It ignores the fact that emotion matters—and means something. It also ignores the fact that we are people, not computers or robots. Honestly, the fact that privileged groups tend to get a logic pass while marginalized groups are constantly accused of being “emotional” should be enough reason to question this bizarre dichotomy.

From Dawkins’ response, it is clear that he listened as woman after woman explained that rape is rape is rape, and yet he rejected their experiences with a wave of the hand. He goes on to passionately defend his categorization of rape by pointing out that we tend to hand down tougher sentences in cases that involve strangers and knives. This is ridiculous on so many levels. For all his claims to using “logic” and “reason,” Dawkins shows precious little of it here.

First of all, there is a difference between the harm caused by a crime and the penalties we set in our legal system. We do not hand down sentences based solely on harm caused. If we did, we would have each victim of a crime psychologically tested to determine the extent of the harm caused (is that even possible?) and then base the sentence on that measure. We don’t do that. Those responding to Dawkins’ claim were explaining that rape is rape is rape when it comes to the harm caused. You cannot categorize rape and then argue that one category is “worse” than another, which is what Dawkins did. But this is a claim about harm, not about the legal system.

So let’s move on to the legal system. Let’s assume that Dawkins is right, and that rapes conducted by force by a stranger involve higher sentences than rapes conducted by an acquaintance. Well you know what? The legal system is not always right. I suspect one reason for the difference in sentencing is the perception that victims of “stranger rape” are more innocent and less “at fault” than victims of “date rape”—an idea Dawkins claims to reject, but which I think affects him more than he realizes. I suspect, too, that perpetrators of “stranger rape” are seen as more dangerous to society than perpetrators of “date rape.” This, too, is a problem—and something Dawkins should interrogate rather than simply accepting. When we judge “date rape” offenders as less dangerous to society and give them lighter sentences, we let them off to rape again—and most “date rape” offenders are serial offenders.

Of course, there are other things that may also play into the sentencing differences. Perhaps the use of violence and a knife adds assault charges to the rape charges, and leads to a higher sentence. Perhaps, too, the sentencing is also affected by the fact that that it is typically easier, using evidence, prove “stranger rape” to the satisfaction of the legal system.

Dawkins does not appear to consider any of this, which is odd given his appeal to “reason” and his claim that his critics are letting “emotion” rule. This is one reason I really dislike the way the reason/emotion dichotomy is used in these sorts of discussions. It is rare indeed that the person brandishing the “reason-trumps-emotion” hammer to silence his foes is as bereft of emotion—or as guided by reason—as he thinks he is.

My friend, the one in therapy for PTSD, is very emotional when it comes to rape—and she has every right to be! That does not make her experiences, or her ideas about rape, less legitimate than Dawkins’. In fact, because she is speaking from experience, I would place more weight on her thoughts than on Dawkins’. Experience and—yes—emotion—are valuable parts of human discourse that bring in key facets that logic and reason fail to get at. Somehow I don’t think Dawkins will ever understand that.

July 30, 2014
Both Children and Parents Are Demanding
Next Post

August 1, 2014 CTBHHM: Sodomite Predator
Recent Comments
0 | Leave a Comment
Browse Our Archives
get the latest from
Love, Joy, Feminism
Sign up for our newsletter
POPULAR AT PATHEOS Nonreligious
1

The pandemic disproves God
The bizarre pandemic currently gripping the world raises the age-old philosophical dilemma...
view all Nonreligious blogs
What Are Your Thoughts?leave a comment
Copyright 2008-2020, Patheos. All rights reserved.