How Not To Combat Sexual Abuse

Next week Frontline Family Ministries is holding National Sexual Abuse Prevention Week for Homeschoolers. You would think this would be something I would support, right? I’ve talked before about a culture of looking the other way in homeschooling communities, the way homeschooling can make detecting  abuse more difficult, and fundamentalist and evangelical beliefs that let offenders off the hook. Spending a week raising awareness and promoting prevention should be a good thing, right? 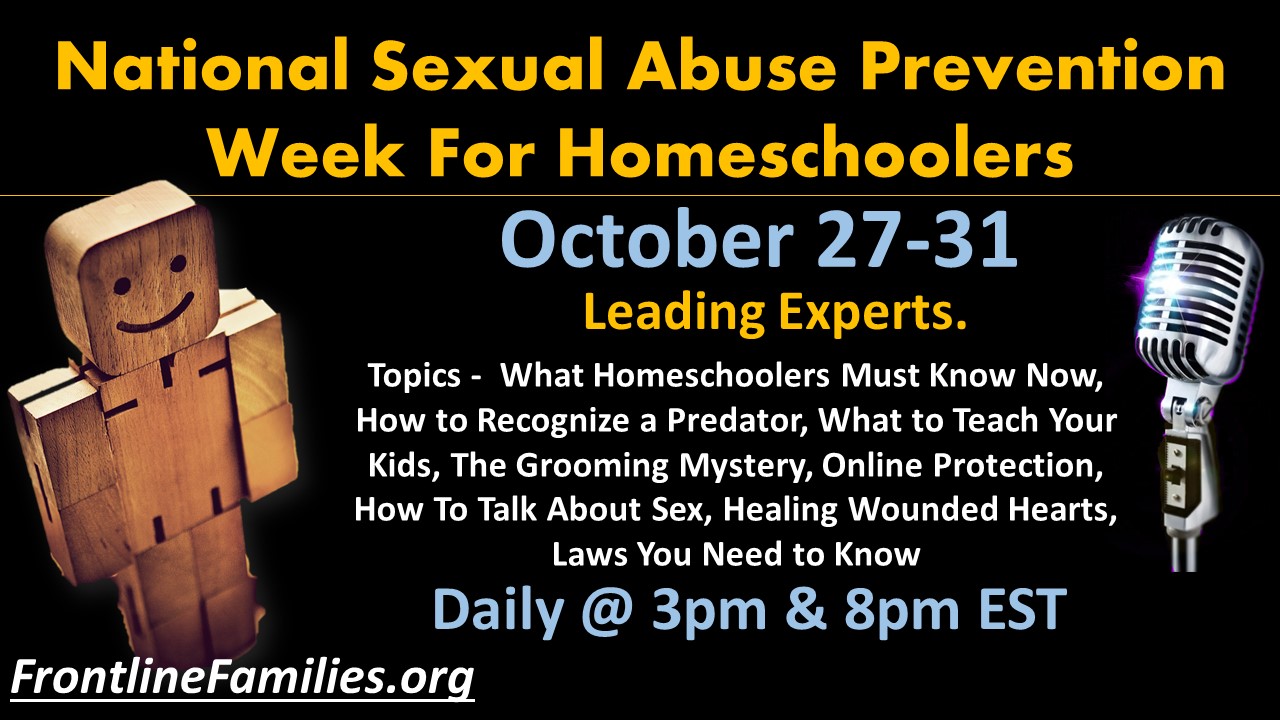 Frontline Families is run by a Doug and Lisa Cherry, quiverfull parents to ten homeschooled children. If their discussion of sexual abuse and how to prevent or handle it aligned with best practices, this wouldn’t be a problem—but it doesn’t. R. L. Stollar is writing a series this week on why he cannot support Frontline Ministries’ National Sexual Abuse Prevention Week for Homecshoolers, and it’s worth a read. Here I want to touch on a few points, quoting at times from Ryan’s pieces.

The Cherrys have personal experience with sexual abuse, experience Lisa Cherry discusses in her book, Unmask the Predators: The Battle to Protect Your Child. When Lisa’s daughter Kalyn was 15, Lisa discovered that she was being groomed by a 46-year-old man in their congregation. Not only did Lisa initially handle this very badly—blaming Kalyn for ruining their family’s reputation—but the approach she eventually settled on and promoted in her book centered on waging spiritual battle against demonic forces.

Here is a page from Lisa’s book:

“I was never more keenly aware of this fact than during our struggle for Kalyn. We were fighting against powers much stronger than the emotions of a confused fifteen-year-old girl. The truth of Ephesians 6:12 became quite apparent: “Our struggle is not against flesh and blood, but against the rulers, against the authorities, against the powers of this dark world and against the spiritual forces of evil in the heavenly realms.”

Kalyn had been “soul tied” to a man steeped in the dark world of pornography and perversion. The battle for her life was a battle in the heavenlies.”

Throughout her book, Lisa describes Kalyn as “rebellious” and centers on spiritual warfare. As Ryan explains:

There are many problems with this use of demonology in the context of abuse. The foremost one I want to mention is that that it only amplifies a victim or survivor’s feelings of terror and guilt over abuse. To suggest to a victim or survivor that their intense emotions – their feelings of anger, pain, betrayal, abandonment, and so forth — is not physically real (but rather the result of a demonic possession) is psychologically damaging. It makes them distant and distrustful of their emotions. This is damaging because (1) emotions are important indicators about reality and (2) acknowledging one’s emotions is a crucial part of healing and recovery.

Another reason why demonology is problematic in this context is that it shifts the responsibility for criminal actions away from the actual abusers and towards supernatural forces.

When discussing “our family’s crisis,” Lisa Cherry does this: “The enemies in this battle are really not the people involved in the dark acts, but the forces of evil which have taken them captive to do their will for this season” (67-8). While this could remain an abstract spiritual point, she later applies it naively and dangerously to the man who abused her own daughter. Lisa says, “I do not believe this man intentionally set out to hurt our daughter’ (137). She then blames the spiritual forces of darkness instead. While there is a time and place for empathy and forgiveness for abusers, language that in any way excuses or minimizes the actions of abusers is inappropriate here.

This isn’t the only problem with Lisa’s approach, either.

Obedience as abuse prevention: Lisa promotes obedience to authority as a way to prevent child sexual abuse, seemingly unaware that it is children who have been taught to be obedient who are the easiest prey for sexual abusers. She goes so far as to slam gentle parenting and urge parents to demand first-time obedience from their children and be ready to back it up with corporal punishment.

Patriarchy as abuse prevention: Lisa says that women put their children at risk by asking for equal rights, and calls on her female readers to submit to their husbands as a way to protect their children (remember the spiritual warfare context). One wonders what a wife should do if her husband is sexually abusing their children, or finds out their children have been sexually abused and decides to hide it and pretend it didn’t happen rather than doing anything about it.

Reporting as optional: Lisa says she and her husband reported their daughter’s abuse to the police (which is good!), but rather than calling for other families to do the same she argues that fathers should listen to God’s leading on this, and explicitly states that there are exceptions and situations where abuse should not be reported to the authorities.

Based on Kalyn’s Secret alone, I would highly discourage people from consulting Lisa Cherry and Frontline Family Ministries for advice on sexual abuse prevention. From their advocacy of unbiblical theology to their perspective on mental health, from their obsession with demonology to their shockingly bad recommendations of people like Bill Gothard and Reb Bradley and organizations like IBLP and Teen Mania, they are pointing abuse victims, survivors, and their families in all the wrong directions. Those directions have proven time and time again to lead to immense pain for the abused.

In future posts, Ryan will look at another of Lisa’s books and go through some of the material on Frontline Family Ministries’ website. One point Ryan will touch on is Lisa’s rampant homophobia.

It is probably possible for someone to believe homosexuality is sinful and still endorse best practices when it comes to identifying and dealing with child sexual abuse, but this is not what Lisa does. Instead, her disgust at homosexuals and homosexual activity leaders her to type LGBTQ individuals as natural predators. 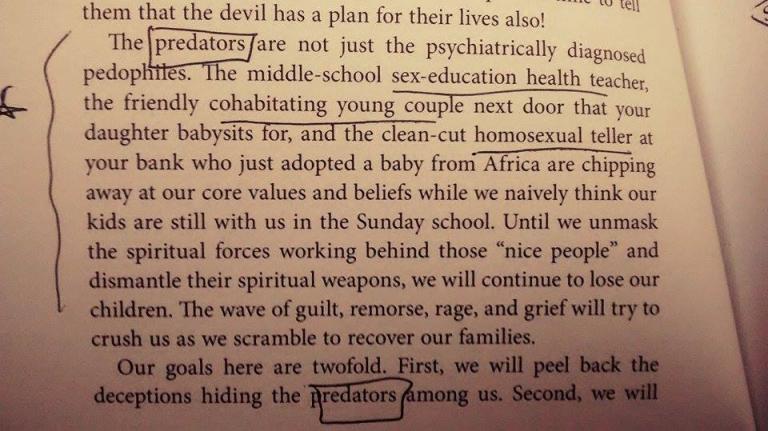 The predators are not just the psychiatrically diagnosed pedophiles. The middle-school sex-education health teacher, the friendly cohabitating young couple next door that your daughter babysits for, and the clean-cut homosexual teller at your bank who just adopted a baby from Africa are chipping away at our core values and beliefs while we naively think our kids are still with us in the SUnday school. Until we mask the spiritual forces working behind those “nice people” and dismantle their spiritual weapons, we will continue to lose our children. The wave of guilt, remorse, rage, adn grief will try to crush us as we scramble to recover our families.

Our goals here are twofold. First, we will peel back the deceptions hiding the predators among us.

Yes, you read that right. In a blog post titled Sexual Predator Calling Cards, Part 1: Found One in My Mailbox, Lisa describes the horror she felt when she found that one of her favorite magazines, Country Living, had included a story on a gay couple and their five-year-old daughter in its latest issue.

My mind did a double take as I re-read the article’s opening line… Jesse and Gus have forged a surprisingly modern home…. I turned the page to find a picture of this “couple”—two men and their five-year-old daughter.

What?!  I was accidentally taking a tour of a homosexual couple’s house? I dropped the issue on the floor in disgust. The images of the cute little girl stuck hauntingly in my mind.

What if I had left that magazine in my bathroom reading rack as I usually do, and my children had seen it?  They could have been influenced and damaged by this deceptive display.

Will you resolve with me that when we encounter a predator’s calling card, we will call it what it is, and counter it with the truth?

Lisa’s daughter Kalyn was groomed by a straight cisgendered male, and yet she insists on discussing “homosexuals” as “predators.” But this is part of the reason it is so easy for sexual abuse in evangelical or fundamentalist circles to go unnoticed. If you assume you can identify predators by sight, and that predators are those living apart from God’s word, you will miss the predators in your midst—just as Lisa missed her daughter’s abuser.

This is not actually the first time I’ve blogged about Lisa Cherry. Last May, Lisa wrote a blog post called An Open Letter to My Fellow Homeschool Parents. In it she dealt with the fallout of the Bill Gothard and Doug Phillips scandals. Here is what I had to say about her blog post at the time:

I recently came upon an article by homeschool mom Lisa Cherry on how homeschoolers should respond to the recent Bill Gothard and Vision Forum sexual abuse scandals. Her article is a bit of a mixed bag. Some of her suggestions—such as homeschool co-op meetings raising awareness about sexual abuse and the importance of labeling abuse as abuse—are good, but others—such as supporting homeschool legal defense organizations that oppose homeschooling accountability—are not so good.

I knew at the time that Lisa Cherry did not “get” it. I knew then that she was stuck at a point I’d seen so many homeschooling parents get stuck at. She was willing to admit that abuse can and does happen in homeschooling families, but saw homeschool alumni who are speaking out about this and brainstorming ways to improve things for current and future homeschooled children as the biggest current threat to homeschooling.

I know now that Lisa does not “get” it on child abuse either. For all of her pretty words and insistence that she is calling other parents to protect their children from sexual abuse, she promotes the very ideas—that children should be taught to be obedient, that involving the authorities is optional, that predators are those who live sinful lifestyles—that have made too many evangelical and fundamentalist children easy prey for abusers.

I have to wonder whether Frontline Family Ministries’ upcoming National Sexual Abuse Prevention Week for Homeschoolers is simply an attempt to stave off criticism that the homeschooling community isn’t doing enough to detect and prevent abuse. If so, they’re doing a very bad job of staving off criticism, because if nothing else this situation has hammered home for me that the current leadership is incapable of speaking against abuse without buying into the very stereotypes that perpetuate it.