I’ve avoided discussing Fifty Shades of Grey, but I do feel the need to touch on a specific aspect of the controversy that surrounds the book (and now, the film). Namely, I’m fascinated that feminists and evangelical Christians have been the book’s most vocal critics. The two would seem unlikely allies! But then, while both groups have tended to condemn Fifty Shades of Grey as toxic, they aren’t truly allies in this, because they oppose the books for completely different reasons. Feminists speak of the book’s endorsement of abuse and its problematic treatment of consent while evangelicals condemn the book for its positive treatment of premarital sex and BDSM.

An article on the Gospel Coalition was titled Rejecting the Industrialized Sex of “Fifty Shades”. In it the author, Joe Carter, focuses on both premarital sex and having multiple sexual partners before marriage. In his post he gives us a fascinating glimpse of the evangelical position on sex and sexual relationships. He uses Fifty Shades of Grey as a taking off point, stating that:

I was reminded of [Wendell] Berry’s insight [that sex has been industrialized] because of the release of the new film, 50 Shades of Grey, which epitomizes and promotes this view of industrialized sex. Too much has already been written about the stupidity and vulgarity of the novel, so I won’t waste time rehashing why no Christian should engage with that pornography. Instead, just as Berry offers advice on how to recover the pleasures of eating from consumerism, I want to offer a few modest suggestions for how Christians can recover sex from industrialization.

In the remainder of his post, the author condemns pornography, fetishes, premarital sex, having more than one sexual partner over a lifetime, withholding sex from one’s partner, and sex for the sole sake of pleasure. For Carter, Fifty Shades of Grey “epitomizes and promotes” an “industrialized” view of sex.

In an article in Christianity Today, Jonalyn Fincher put her objections like this:

I do have concerns, for the following reasons:

– Genesis 1:18-19 teaches that men and women are made in God’s image; this means that all we do, including our love-making, should tell the world the truth about what God is like.

– Genesis 3 introduces the roots of what we’ve come to call the gender war where man is judged to rule over women (Gen 3:15), and we’ve been attempting to dominate each other ever since. This isn’t the way we were created to be.

– Even Hebrews 13:4—”The marriage bed is not defiled”—does not give Christians a blank check to engage in any sexual behavior as long as it’s consenting adults.

What about feminists? What has been the main critique there?

In a recent post on Feministe, Capterton explained it as follows:

Valentine’s Day is coming up! That day of romance, of togetherness, of coupledom, of… domestic abuse… Valentine’s Day is the release date of 50 Shades of Grey, that sensationalistic movie based on the “How to Spot an Abuser” pamphlet in your college guidance counselor’s office. Women and men who have read the book and know perfectly well what the story is about will flock to theatres, either a) dreaming of the day that they’ll be stalked and violated by someone as dreamy as Christian, or b) hoping to score on Valentine’s night with the person they took to the movie.

As much as I hate to be a buzzkill (note: This is true. I do, in fact, hate being a buzzkill), I can’t not point out that the book is a horrible, awful book, and that unless the movie carves the entire storyline down to the glider scene and some of the scenes with Kate, who seems cool, it’s going to be a horrible, awful movie as well. Moreover, though, it’s a book that romanticizes a seriously abusive relationship, and while people are free to publish whatever they want and read whatever they want and get their rocks off to whatever they want (within certain limits), it’s important to acknowledge that what may (for some reason) come across as sultry and sexy on the page would, in real life, be a Razorbacks halftime show’s worth of red flags.

Other bloggers have made the same argument, pointing out that Christian Grey, the protagonist, is manipulative and controlling and—yes—abusive.

In a blog post I wrote a few years back, I explained the difference as follows: 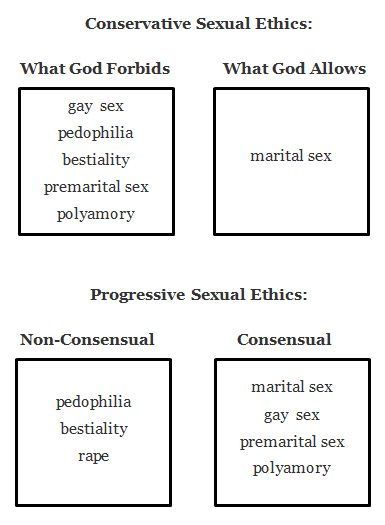 To be perfectly fair, some evangelicals have also picked up on the abusive themes in Fifty Shades of Grey. Evangelical blogger Rebecca Florence Miller connected the book to intimate partner violence. But in general, what has evangelicals up in arms over Fifty Shades of Grey is its endorsement of premarital relationships and kinky sex, while what has feminists up in arms is its glorification of abuse and its perversion of kinky sex. This disagreement is rooted in a huge divergence in the two groups’ underlying sexual ethics.

February 14, 2015
What I Love about My Feminist Husband
Next Post

Nonreligious
Some Christians Are Using the Pandemic as an...
Love, Joy, Feminism 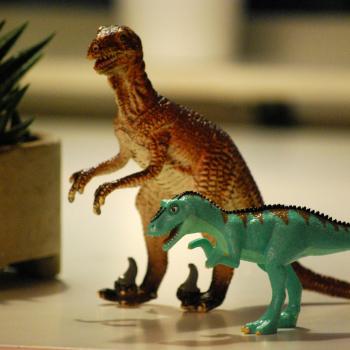 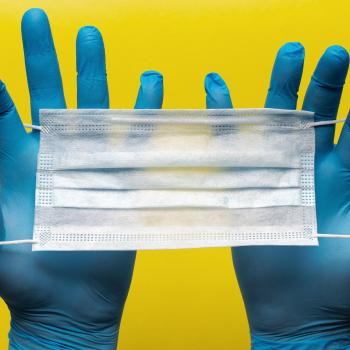