Is Child Marriage Wrong if the Parents Consent?

I was struck by a recent facebook post by Michael Farris, in which he discussed whether the government should be allowed to set a minimum age for marriage. 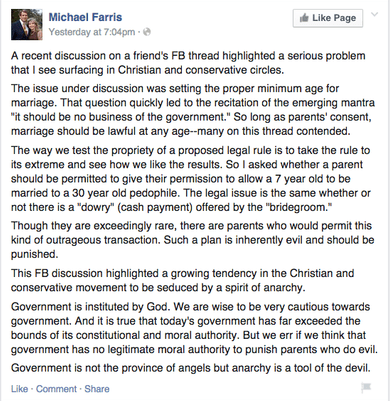 A recent discussion on a friend’s FB thread highlighted a very serious problem that I see surfacing in Christian and conservative circles.

The issue under discussion was setting the proper minimum age for marriage. The question quickly led to the recitation of the emerging mantra “it should be no business of the government.” So long as parents’ consent, marriage should be lawful at any age—many on this thread contended.

The way we test the propriety of a proposed legal rule is to take the rule to its extreme and see how we like the results. So I asked whether a parent should be permitted to give their permission to allow a 7 year old to be married to a 30 year old pedophile. The legal issue is the same whether or not there is a “dowry” (cash payment) offered by the “bridegroom.”

Though they are exceedingly rare, there are parents who would permit this kind of outrageous transaction. Such a plan is inherently evil and should be punished.

This FB discussion highlighted a growing tendency in the Christian and conservative movement to be seduced by a spirit of anarchy.

Government is not the province of angels but anarchy is a tool of the devil.

Don’t get me wrong, I’m glad to see Farris state that the government has legitimate moral authority to punish parents who do evil. In my experience, the organizations he has founded (HSLDA and parentalrights.org) tend to work against the government’s ability to do just that (read more here), but perhaps his statement is something we can work with and build on. Or maybe that’s just me being overly optimistic. Perhaps his statement is more about PR than anything else.

More to the point, when I saw Farris’s post I was intrigued that he felt the need to take seriously the argument that parents and parents alone should be able to determine when a child is old enough to marry. That in and of itself is striking. That Farris, with his position as arguably the most visible spokesman for Christian homeschooling, felt the need to take this argument seriously suggests that this is considered a serious argument in his circles—and that is more than a little bit disturbing. 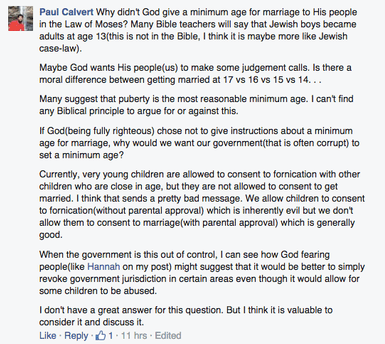 Why didn’t God give a minimum age for marriage to His people in the Law of Moses? Many Bible teachers will say that Jewish boys became adults at age 13 (this is not in the Bible, I think it is maybe more like Jewish case-law).

Many suggest that puberty is the most reasonable minimum age. I can’t find any Biblical principle to argue for or against this.

If God (being fully righteous) chose not to give instructions about a minimum age for marriage, why would we want our government (that is often corrupt) to set a minimum age?

When the government is this out of control, I can see how God fearing people (like Hannah on my post) might suggest that it would be better to simply revoke government jurisdiction in certain areas even though it would allow for some children to be abused.

I don’t have a great answer for this question. But I think it is valuable to consider it and discuss it.

Given Paul Calvert’s mention of his own post, I went to his facebook page to see if he had posed the original question Farris had been responding to. He had. Below are some of the comments left on his post, which was a question regarding the reasonable minimum legal age for marriage:

I am reminded of the Chapmans, whom I wrote about over a year ago now. Maranatha Chapman married a much-older man at age 15, and the story of her courtship and wedding was told and retold as a model and aspiration in Christian homeschooling circles in the 1990s. In 2008, Maranatha’s daughter, Lauren, also married a much-older man. She had just turned 16.

The Chapmans don’t just practice child marriage, they also preach it, encouraging other homeschooling parents to follow their lead, even arguing that “a difference in age—even a significant one—with the man being older, helps make for a better fit.” Indeed, we see this in one of the comments above—“a 40 year old man that is established and has run his course in sewing his wild oats is, in a lot of ways, a much better match for younger ladies than a youg [sic] man who has yet to move past being daring and impetuous.”

For individuals like Chapman and this commenter, it is important for a man to reach full maturity and gain experience before marriage, but not for a woman. This isn’t accidental, it’s purposeful. Debi Pearl has written that young women should work to keep themselves malleable so that they can become whatever helpmeet their future husband needs. They are to fit themselves to him, to change themselves as needed, to be what he needs them to be. A woman needs to be physically mature before marriage, but, well, that’s about it.

I grew up in a Christian homeschooling family, but I never saw anything like this in my community. I was surprised, then, when several other homeschool alumni commented on my posts about the Chapmans sharing stories of homeschool girls married of at 16 or 17, often to someone selected by their father, and generally without much life experience beyond their home, church, and Christian homeschooling group.

I’m still not sure how common it is for Christian homeschool girls to be married off at 16 or 17, or for homeschooling leaders to argue in favor of marrying young teenage girls off to much older men. Not very, I hope. However, it is perhaps because I am unsure that I find it so disconcerting that Farris felt the need to engage seriously with individuals arguing that parents should be able to marry their children off even younger. Just how widespread are these views? And even Farris only objected to marriages before age 16.

Early marriages are unwise for a number of reasons, but for individuals like Chapman or other commenters on these threads, early marriage solves a number of problems—it helps ensure that girls maintain their virginity before marriage, and that they do not have the time to become independent or get ideas. Instead, they are passed from father to husband, and expected to submit to male headship either way. This is a problem, especially in the Christian homeschooling world, where girls’ life experiences may be limited in the name of “sheltering” and “protecting” them, and it’s something that should be soundly condemned.

Of course, Farris would rather discuss the potential of libertarianism to veer into anarchy than address any of this. That, unlike the rest, doesn’t surprise me in the least.