In a recent Christianity Today article, O. Alan Noble wrote the following of Christians who have supported the Obergefell decision:

Many supported the court ruling because for so long our culture has harbored contempt, disgust, and hatred for people who deviate from heterosexuality. This is a tragic and inexcusable legacy for which the evangelical church bears some responsibility. When you can get bullied or killed for being gay, it matters when people are willing to come alongside you.

The first rhetorical shift is in how evangelicals talk about gay people.

Evangelicals like Noble want everyone to believe that they don’t harbor any ill will toward gay people. More than that, they assure everyone that they love gay people! They simply believe that having gay sex is a sin. This rhetoric is still fairly new. Before society became more accepting of gay and lesbian individuals, evangelicals were not interested in assuring everyone that they don’t hate or harbor ill feelings toward gay people. No indeed. This is evangelicals’ last minute mad scramble to avoid the label “bigot.”

The trouble, of course, is that Noble himself describes same-sex marriages as “fundamentally sinful” in this same article. My mind is called to a lesbian couple I know, raising their son together.  They’ve been together for nearly two decades, supporting each other through painful family reactions, the death of a family member, and the challenges of raising a small child. Their love, their relationship, is beautiful. Noble would describe it as “fundamentally sinful,” and at the same time claim that he does not feel any contempt, disgust, or hatred for either of them.

I am skeptical of how widespread (and how deep) this shift in rhetoric actually is. If asked, my mother might say that she “loves” gay people, but she still shudders in disgust when the topic comes up. I grew up in the 1990s and early 2000s, and I was raised on disgust. It was very explicit. “Isn’t that disgusting?” my parents would say after explaining what it meant to be gay or lesbian. We children nodded in agreement, but I was never sure what I was supposed to find disgusting, exactly, because my parents were very vague in their explanations. I have younger siblings still at home, also being raised on disgust. And don’t think my parents are fringe, either. They attend a mainstream conservative evangelical megachurch.

The second rhetorical shift puts evangelical bigotry safely in the past.

Noble consigns contempt, disgust, and hatred for gay and lesbian individuals to evangelicals past. Putting evangelical bigotry in the past (and downplaying it at that) allows evangelicals to wiggle away from the enormity of the harm they have caused and continue to cause, because society has changed and they are now being called out, and that’s uncomfortable. Better to get ahead of the wave by admitting “some” responsibility, and then acting like that was all in the past, rather than actually grappling with evangelicals’ continued role in fomenting hatred and misunderstanding and causing very real harm. 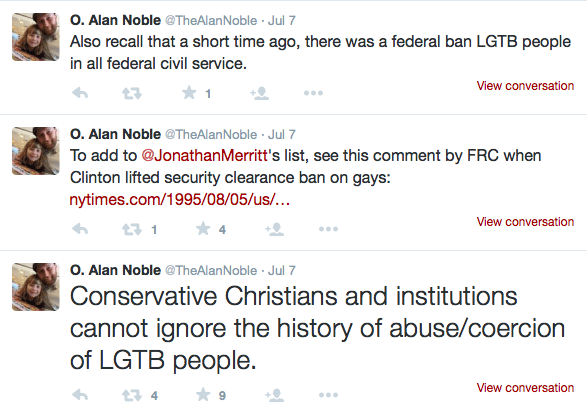 Note that the entry Noble adds to Merritt’s list of recent evangelical efforts to stall marriage equality is from twenty years ago, and note his repeated use of the word “history.” Evangelical bigotry in the past—the far, far past. Noble does not mention things like Thabiti Anyabwile’s 2013 article, The Importance of Your Gag Reflex When Discussing Homosexuality and “Gay Marriage.”

Consider how many times you’ve read the word “gay” or “homosexual” in this post without thinking about the actual behaviors those terms represent. “Gay” and “homosexual” are polite terms for an ugly practice. They are euphemisms. In all the politeness, we’ve actually stopped talking about the things that lie at the heart of the issue–sexual promiscuity of an abominable sort. I say “abominable” because that’s how God describes it in His word. I think we should describe sin (and righteousness) the way God does. And I think it would be a good thing if more people were gagging on the reality of the sexual behavior that is now becoming public law, protected, and even promoted in public schools.

Noble cannot consign these things to the far past because they are not in the far past. Noble actually wrote three guest pieces for the Gospel Coalition in the year after Anyabwile’s post, suggesting that he did not feel the need to censor the Gospel Coalition over posting Anyabwile’s piece. Noble also has a history of tweeting approvingly at or about Anyabwile. While I understand Noble’s appreciation of Anyabwile’s efforts to move evangelicals forward in their discussion of race, it is odd that he can associate so publicly and often with someone who so recently called for Christians to approach LGB individuals with disgust, and yet write as though these views are in the past.

And it’s not just Anyabwile. In 2014, Franklin Graham (son of Billy Graham) had this to say of Russia’s ban on “gay propaganda”:

In my opinion, Putin is right on these issues. Obviously, he may be wrong about many things, but he has taken a stand to protect his nation’s children from the damaging effects of any gay and lesbian agenda.

In 2014, Southern Baptist pastor Jody Hice of Georgia was elected to U.S. Congress. In his 2012 book, he warned people that gays have a plan to sodomize their sons and seduce their children. If these aren’t attempts to instill hatred and contempt for gay individuals, I don’t know what is. And I could go on—there are scads of evangelical leaders who make similarly condemnatory statements to this day.

In calling evangelicals to remember their homophobic past, Noble fails to grapple with evangelicals’ homophobic present. This problem is going to become only more common as an increasing number of evangelicals present themselves the way Noble does, insisting that they feel nothing but love and goodwill toward gay and lesbian individuals and acting shocked and incensed when they are accused of bigotry. Surely not, they say! Not us! We evangelicals love love love gay people and have not a single iota of ill will in our bones! First of all, no. And second of all, no.

It’s like they’re too worried about being called bigots to notice their own bigotry.