Bill Gothard Explains Road Safety (aka How Not to Get Raped)

Bill Gothard Explains Road Safety (aka How Not to Get Raped) August 17, 2015 Libby Anne

Do you remember when that Saudi historian said that western women drive because they don’t mind getting raped? He used the danger that occurs when a woman’s car breaks down, leaving her open to sexual assault by any passerby, as a rationale for maintaining the Saudi ban on women driving. Well. Watch as this road safety module produced by Bill Gothard’s Advanced Training Institute (a program for fundamentalist homeschoolers) takes a weird turn.

(I was sent this module via Wende Benner of Homeschoolers Anonymous. You can read her story here. She filled out this module herself while attending Gothard’s EXCEL training program for girls.) 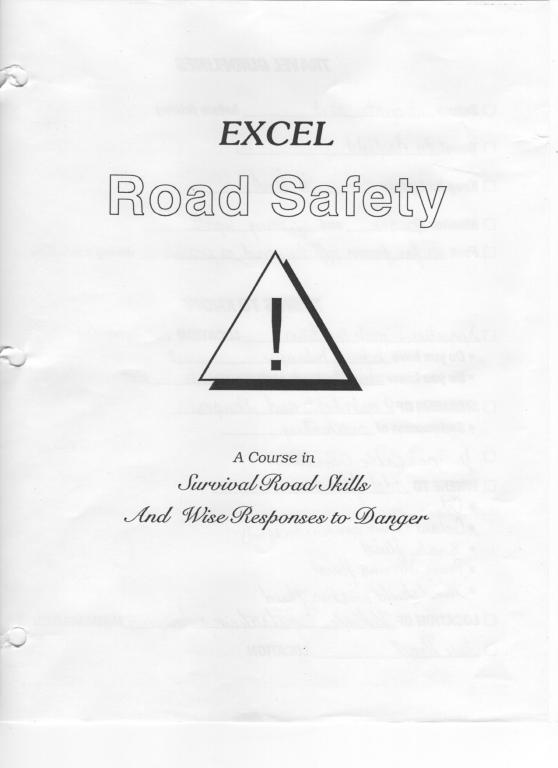 The module is titled “Road Safety: Survival Road Skills And Wise Responses to Danger.” Since the responses to danger bit falls under the road safety heading, we can assume it’s about things like changing a tire safely, or knowing how to drive around a car that isn’t signaling or staying in its lane, yes? 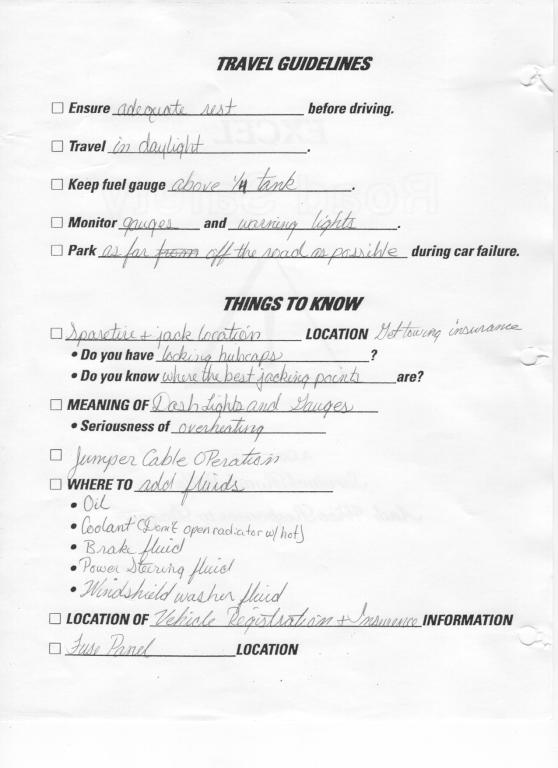 I actually would have found this page very helpful when I was a teen. If I’d read the bit about warning lights and overheating, I might not have totaled my mom’s car as a teen by melting her engine. (Seriously, this is one memory I’d really like to forget!) On the other hand, filling out a sheet like this does exactly squat to tell you where to put the brake fluid, or where the best jack points are, etc. So there’s that. 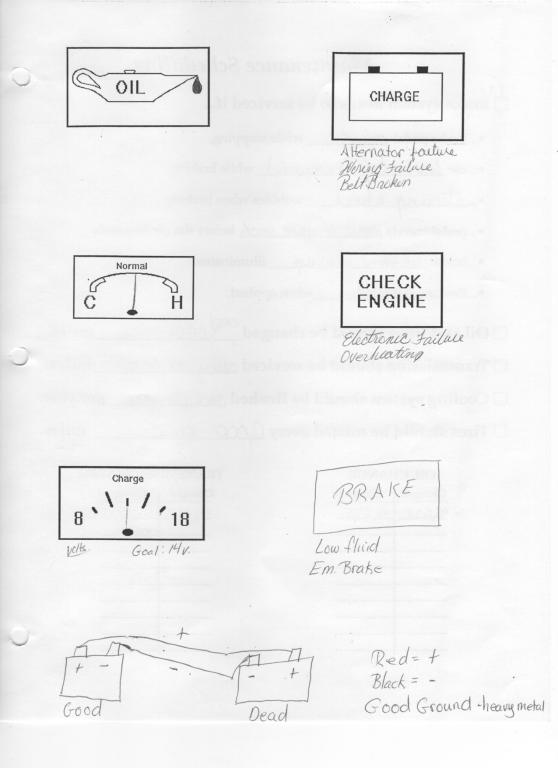 Hang on, are these meant to be the warning lights? Because if so, my experience suggests that different cars have different warning lights. In fact, we recently got a new (to us) car, and I’ve found that the manual is my friend because when the warning lights come on I have absolutely no idea what they mean, because they look totally different from my other car. 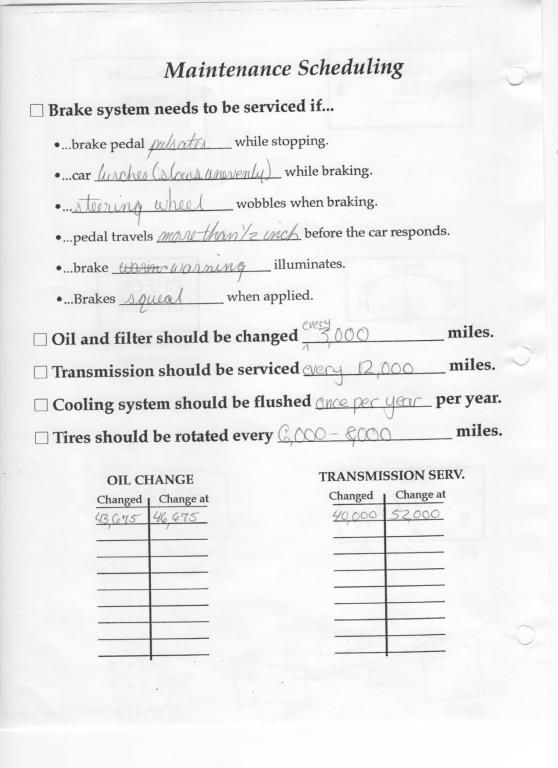 That last chart bit would be more helpful on a small notepad in the glove compartment, because I’m pretty sure most people aren’t going to be stuffing this entire module in there. But maybe it’s just meant to give the student experience with how these numbers should be written down? 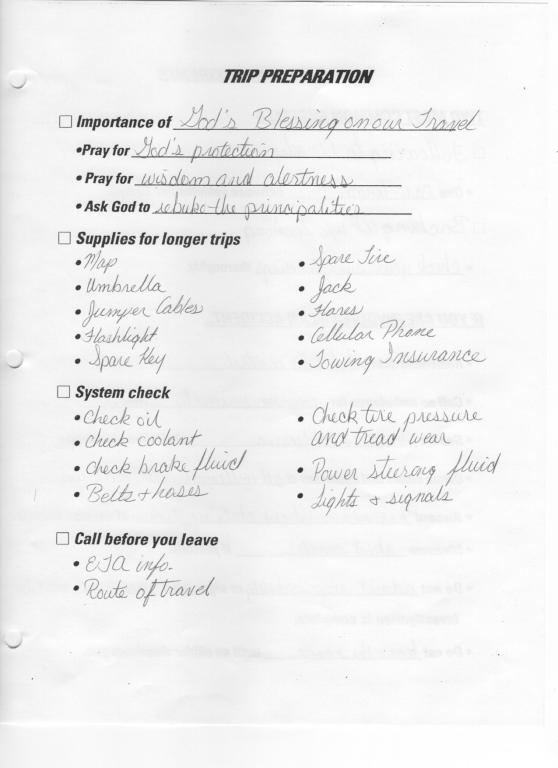 This is actually fairly comprehensive. Most people probably don’t pray before a trip, but mine always did, so it doesn’t seem weird to me. And the list of things to bring (and do before leaving) is quite thorough. 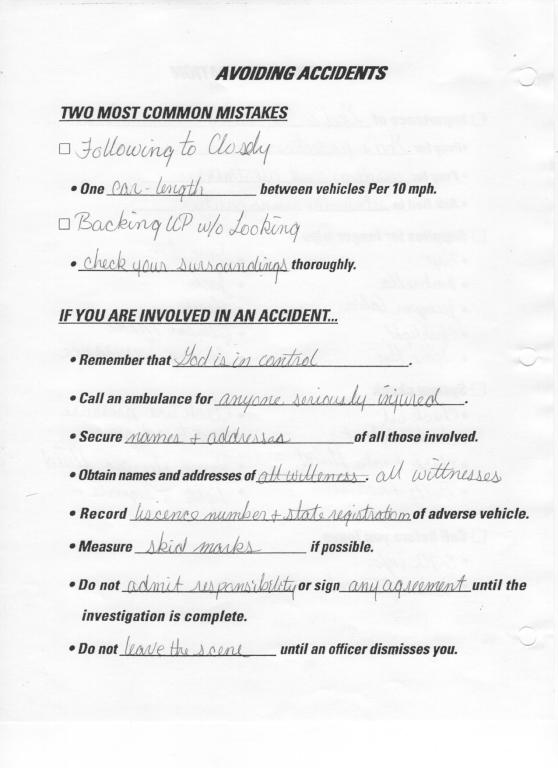 While not getting to close to the car in front of you is important, one car length per 10 miles per hour isn’t going to serve you well when driving in congested cities. People will keep pulling into your lane in front of you, and then you’ll have to slow down to increase the distance. Also, the “what to do if there’s an accident” section says not to leave until an officer dismisses you, but it doesn’t say to call the police in the first place, which makes it feel slightly disjointed.

Of course, I’m just nit-picking here. We’re six pages into the module, and it’s mostly pretty standard stuff. Remember that these modules are designed for homeschooled students, many of whom (myself included) will never take driver’s ed, so it’s good that they’ll get any information at all, although obviously this module would be best accompanied with some hands-on training.

But let’s look at what comes next. 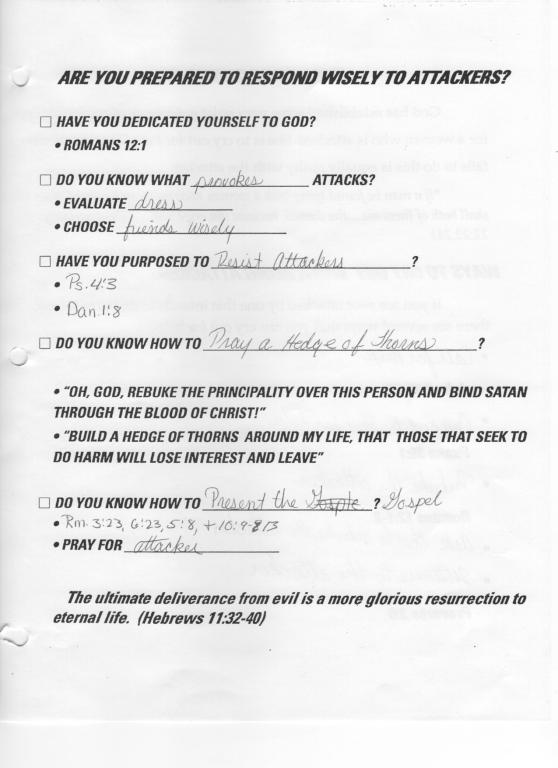 Yes, we’re still in the same “Road Safety” module! All we did was turn a page, and hey, would you look at that? Suddenly it’s all about responding to attackers . . . because it’s totes common for women to be assaulted while driving.

What “provokes” an attack, according to Gothard? How you dress and the sort of friends you chose. Lovely. Just lovely. Hello, slut shaming and victim blaming! And what should you do if you are attacked? Well, resist, of course, but also present the gospel and pray for your attacker. Because converting a man who is trying to rape you while fending him off to protect your virginity is pretty much the epitome of godliness. 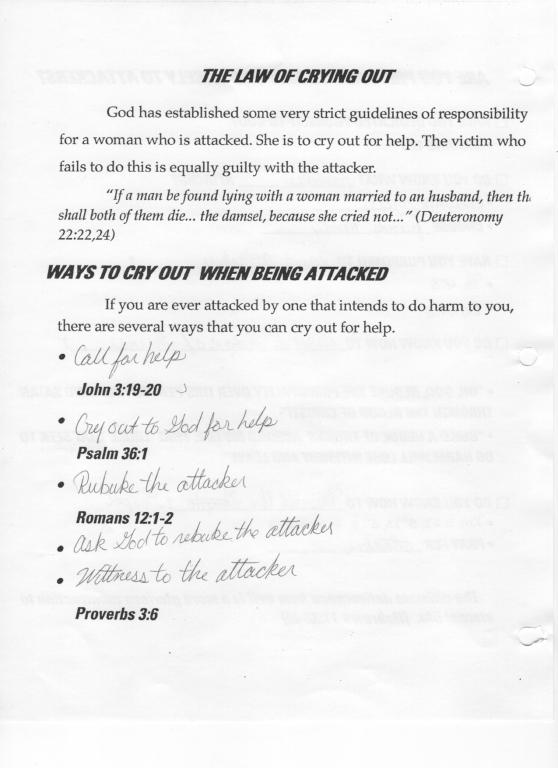 Yes, you read those first sentences correctly: “God has established some very strict guidelines of responsibility for a woman who is attacked. She is to cry out for help. The victim who fails to do this is equally guilty with the attacker.” Yes, really. A victim of sexual assault who does not cry out—who remains silent for whatever reason—is equally guilty with her attacker.

Think for a moment about the Duggar girls. They did not cry out for help when they were sexually assaulted by their older brother. How might studying from a module like this (and remember that the family centered their curriculum and Bible study on Gothard materials) affect one of them, or anyone else who has ever been sexually assaulted but kept silent? Remember that it is very common for a victim of child sexual abuse not to cry out, because they are first groomed to ensure that they won’t. 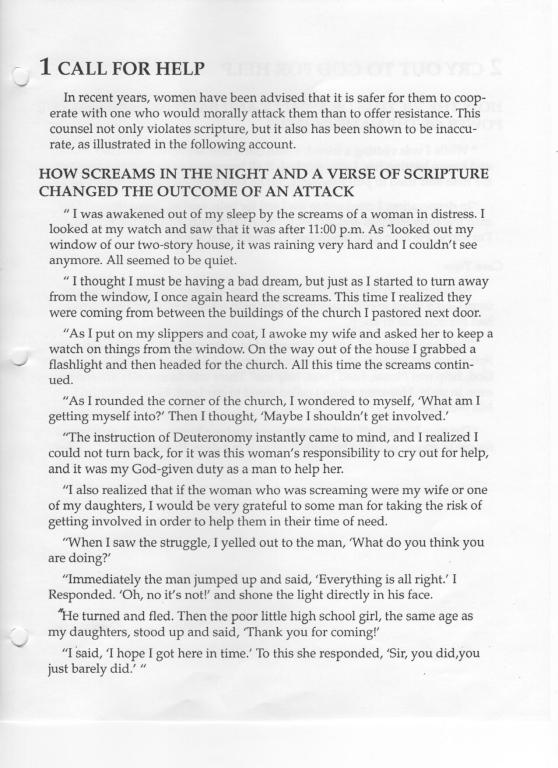 Okay, first of all, let’s be clear that “morally attack” means sexual assault. And second, let’s be clear that in the story presented on this page, the “I hope I got here in time” and “Sir, you did, you just barely did” exchange means the girl’s virginity was still intact, which is of course what really matters to Gothard. But the thing is, she was still sexually assaulted. She is still going to have to work through the trauma of that. And I actually get the feeling that Gothard isn’t aware of that. It’s like the fact that her hymen is still intact means no harm was done. Except that that’s not how it works.

But you know what I really want to know? How the blazes Gothard thinks this one example is evidence that it’s always safer for a woman to cry out when being assaulted than it is for her to remain silent. Look, this is going to vary! In some situations, screaming may alert someone that you need help or scare away the attacker. In other cases, screaming may just make the attacker become more violent. In some situations, a woman may be so shocked by what is happening (especially when the perpetrator is a friend or significant other) that she is stunned into silence. There is no one correct way to respond to being sexually assaulted, and saying there is will only lead victims to blame themselves more than they already do.

Of course, what really matters to Gothard is that if a victim of sexual assault does not scream for help, she violates scripture. It’s not really about what’s most affective, it’s about what the Bible says. But of course, now that he has said the Bible mandates it, he is going to explain that it is in fact effective by offering five more anecdotes (none of which involve rape or sexual assault, I might add). 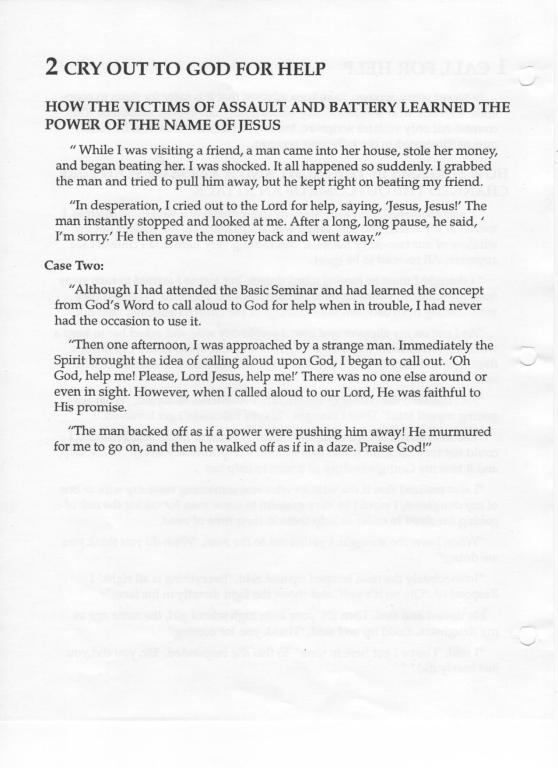 Here are two anecdotes in which crying out to Jesus caused attackers to reconsider! Clearly this means it always works! If you try it and it doesn’t work, you must not have enough faith! /sarcasm

Actually, wait a minute. That second example might not even have been an attack. Perhaps the “strange man” who approached the woman was just going to ask for directions, and when she began shouting to God to save her from him, he backed up with raised eyebrows like anyone else would do in that situation. 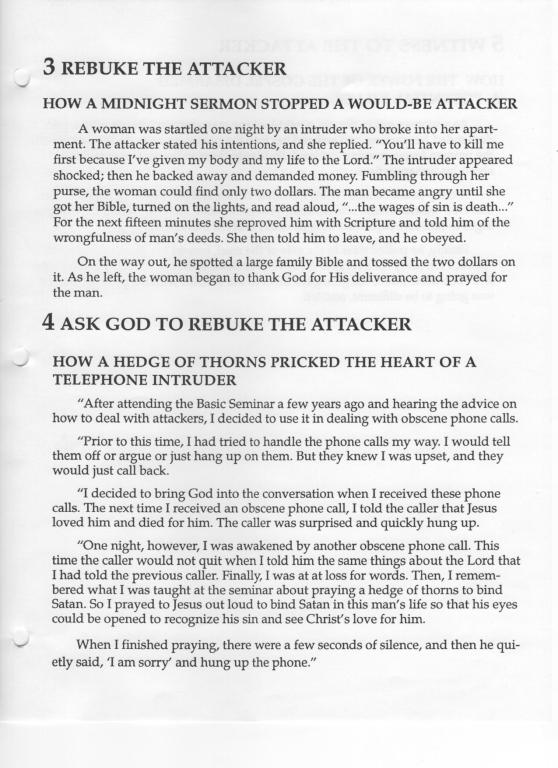 Here are two more examples of cases where witnessing to an attacker caused the attacker to repent and apologize. Ignore the fact that neither of these cases involved sexual assault, because that totally doesn’t matter. If you have enough faith, witnessing to your rapist while he’s raping you will totally make him stop. /sarcasm

That bit about having enough faith that I keep repeating? That’s not in the text, but it’s sure as hell implied. If you’re “godly” enough, God will save you from being raped . . . and thus it follows that if you’re not saved from being raped you must not be godly enough. This is not a good message to be giving teenage girls, especially homeschooled teenage girls who almost certainly will not receive more accurate information elsewhere! 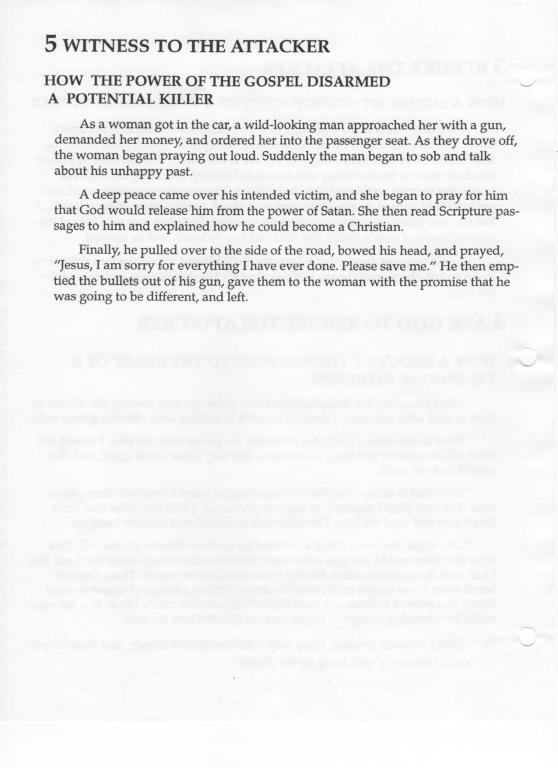 And then we’ll add one more anecdote for good measure. In case you haven’t noticed, Gothard is really big on anecdotes. His textbooks are absolutely chock full of them, from cover to cover.

I do want to note that none of these last five examples actually deals with rape. Only the first example—the girl in the alleyway—had to do with sexual assault. Granted, getting robbed or mugged or held at gunpoint is pretty bad, but encouraging teenage girls (the main target of this workbook) who are sexually assaulted to witness to their attacker somehow seems worse than encouraging them to witness to an attacker who is asking them to hand over whatever cash they have on them.

So, let’s see. Out of twelve pages of Gothard’s “Road Safety” module, six are about car maintenance and contingencies and six are about what to do if you’re sexually assaulted while out driving.

You can probably see, now, why I drew a connection between this and the Saudi historian’s opposition to women driving, because their car might break down and they might be raped at the side of the road. Gothard is positioning driving as something that is fundamentally dangerous for a woman. While it is true that women face a greater risk of sexual assault than men, women are far more likely to be sexually assaulted by someone they know than by a stranger at the side of the road. Portraying driving as fundamentally dangerous for a woman may discourage girls who take this module from achieving the independence that comes with the mobility driving offers.