Mothers are NOT always right

Humans of New York has been visiting Iran recently, and this story of a mother and daughter just popped up in my feed: 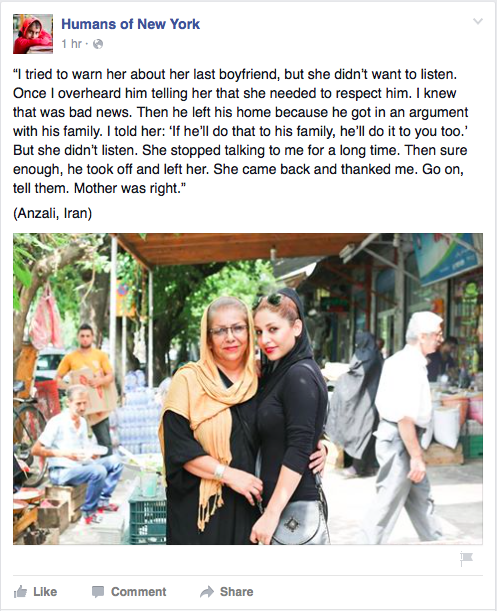 But I’m more bothered by the vast majority of the comments on this post, which run along these lines:

Moms are not always right.

What I find perhaps most flabbergasting is that most of the people who say that moms are always right tend to be mothers. Look, I’m a mother too, and you know what? Being a mom has made me only more aware of the reality that moms are not always right. We’re just as fallible as anyone else! Sometimes I am dead wrong and my daughter is completely right. And the right thing to do, as a mom, is to acknowledge your shortcomings and limitations.

I knew moms weren’t always right even as a little girl, because the punishments my mother meted out weren’t always fair. Sometimes she was wrong and I was right and she called my attempts to explain this “back talk” and added to my punishment. This doesn’t mean my mom was some kind of monster, it means she was fallible. I’m fallible too, and I try to keep that at the forefront of my parenting. Do people grow up and forget about the times they were a kid and their mother was wrong? I seriously do not understand why we have this cultural narrative that moms are always right.

But wait! Children are still learning how to navigate this great big world and they frequently get things wrong and/or need advice, yes? Absolutely! But “mom is always right” is the absolutely wrong narrative to give kids. Instead, we need to encourage them to seek advice from individuals they respect, and who respect them and treat them well in turn. Take a look at this comment, for instance:

Not only is it sometimes important to make your own mistakes, as this commenter points out, but the individuals we go to for advice and input before making our own decisions shouldn’t be limited to mothers. Instead, we should seek advice and input from those we trust. This may include mothers, yes, but depending on the person it may also (or instead) include fathers, grandparents, aunts or uncles, neighbors, bosses, teachers, and family friends. The way we privilege mothers in our narratives isn’t just a problem for those whose mothers are manipulative, controlling, or abusive, it also means we place less value on other relationships.

Our narratives about mothers can also easily veer into toxic entitlement, as we see in this comment on the same post:

Um, no. We do not owe our mothers our conversation or our confidence. Those have to be earned.

I don’t know whether the Iranian daughter described above stopped talking to her mother because her mother acted like she could tell her what to do and that became toxic or because her abusive boyfriend decided to isolate her after hearing of her mother’s objections, but whichever it was, a mother who would refuse to take her daughter back for this would be petty to the extreme, and likely emotionally abusive. And yet somehow, commenters like this one see that as normative.

Now look at the contrast between that last comment and this one:

I am not saying mothers have an obligation to always be there for their kids no matter what. Sometimes children grow up to become manipulative or controlling or abusive adults. What I am saying is that mothers should not condition being their for their children on their children always following their advice or on their children declaring them always right. All children, but especially adult children, need space to be their own people, form their own decisions, and yes, make their own mistakes.

I once had a landlady whose daughter had an abusive boyfriend. My landlady warned her daughter up front, but when her daughter made it clear that she saw nothing wrong with her boyfriend’s behavior and wasn’t leaving, my landlady didn’t press the issue and focused instead on being there for her daughter. The result was that, unlike in the story of the Iranian woman at the top of this post, her daughter never stopped speaking with her. After several years my landlady’s daughter finally came to understand that her boyfriend was abusive. When she left him she went straight to her mother for help and support. There was no “I told you so” and there was no break between mother and daughter to mend.

Now that is a story worth telling.