Bill Gothard and the Dynamics of Abuse

Bill Gothard and the Dynamics of Abuse May 11, 2016 Libby Anne

Yesterday I found out that a Catholic priest who was accused of sexually abusing a 16-year-old girl decades ago has been made director of a teen pregnancy center. This made me think about all of the ways abusers within the church gain renewed access to positions of power (I’m sure it happens outside of the church as well, but this is the area I’m most familiar with). Curious, I looked up Bill Gothard to double check precisely what he’s doing today. I arrived at www.billgothard.com. The website is written in first person, presumably by Gothard himself.

June 28, 2015 will go down as a turning point in my life. I was awakened in the middle of the night with a strong desire to study the true meaning of genuine love. The more I studied it in Scriptures, the more aware and convicted I became of how deeply I had offended many people by my lack of genuine love.

For those of you who may be new to the subject, Bill Gothard has been accused of sexual harassment and molestation by dozens of women who worked close to him as teens or young adults. He stepped down from the organization he founded, IBLP, two years ago, but has since started a new ministry, Life Purpose Power Teams.

I was not able to determine what access to or authority Gothard may currently have over teen girls and young women—has he been actually barred from IBLP headquarters, I wonder?—but I did find something else. I knew that a website set up to defend Gothard had included testimonials from women who had worked with Gothard as teenage girls praising him, and insisting that he had never acted inappropriately toward them, but I didn’t realize that his own website also featured these prominently. Look at the bottom middle section of this screenshot: 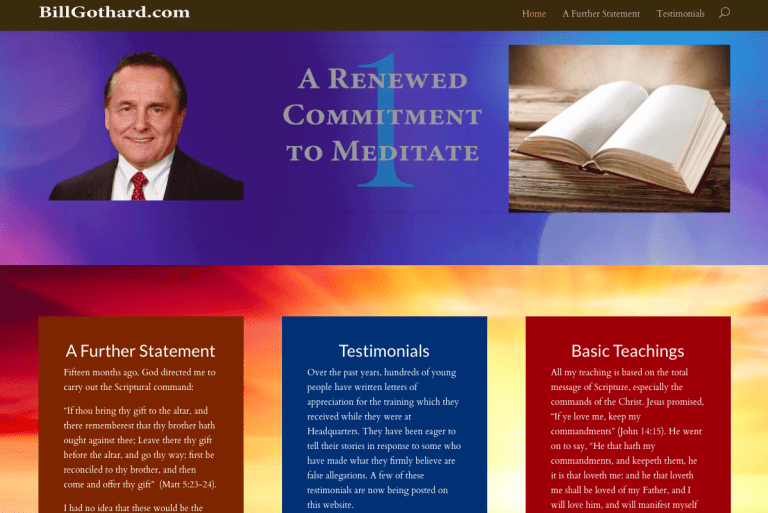 If you click through, you find eight testimonials, all written by women.

There’s this from Linda, who worked with Gothard in the 1970s:

During my tenure, I had many opportunities to work closely with Bill Gothard. During all these times I can honestly say that Bill never ever touched me in an inappropriate way.

There’s this from Ginger, who worked as Gothard’s secretary in the 1980s:

There was never a time when Mr. Gothard allowed us to be alone. He always ensured at least one other person be present. Because Mr. Gothard treated me with utmost respect and professionalism, I always felt safe and free to enjoy my work and life.

There’s this from Joanna, who was at headquarters in the early 1990s:

I know after being there with you for 2 years right next to your office, sitting by you on planes, at meals, and fixing dinner for you at night, you never did anything that was inappropriate.

And this from Lorena, who worked with Gothard more recently:

During my time at the Headquarters, Mr. Gothard always showed a godly behavior toward me. He was very respectful of me and everyone around me.

Perhaps not willing to be overly direct, Gothard never comes straight out and says why he’s posting these stories. Instead, he prefaces them only with this:

Over the past years, hundreds of young people have written letters of appreciation for the training which they received while they were at Headquarters. They have been eager to tell their stories in response to some who have made what they firmly believe are false allegations. A few of these testimonials are now being posted on this website.

This preface does not explain why the testimonials are written exclusively by women or why they all include some reference to the charges of sexual harassment and molestation levied against Gothard by dozens of women over three decades. The import of these testimonials is clear—it’s an attempt to convince supporters that Gothard is innocent of what he is accused of. This feels very, very familiar, as I’ve watched it play out in the homeschool community in which I grew up. The argument stems from a misunderstanding of how abuse operates.

This paragraph from the National Association of Adult Survivors of Child Abuse focuses specifically on pedophiles, but can apply to other forms of abuse as well:

It is our experience that the “grooming” a child is only half the story. Many pedophiles are extremely clever, often charming, patient people, frequently thought of as among the most valued of community members. That’s because they spend a lot of time grooming the parents, friends and neighbors of the children around them, just as they groom the kids themselves. It’s not unusual for pedophiles to pick careers and / or volunteer positions that will deliberately place them in close proximity to the youngsters they crave. They’ll then proceed to impress (or “groom”) the adults around them by becoming the most reliable on-call volunteer, the most generous friend, the most giving neighbor or the favorite relative. Their presentation makes them seem to be completely sincere, among the most trustworthy and valuable community members. Parents of molested kids will often be shocked at their own naivety, but pedophiles are as clever as can be in grooming the adults around them, too.

I mentioned a few weeks ago that the community in which I grew up has been rocked by sexual abuse allegations against several members. Watching these situations play out has even me first hand experience with many of the excuses made for abusers and the tactics used to shift blame to their victims. What Gothard does in highlighting testimonials of women he didn’t abuse is right in line with these same tactics and patterns, but it requires an ignorance of how abusers operate to work.

This is why raising awareness of the dynamics of abuse is so critically important. 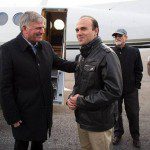 May 10, 2016
Christianity Today Just Gave a Mouthpiece to an Alleged Abuser
Next Post 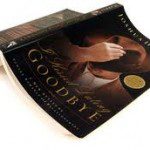