Last year Joshua Harris announced that he was leaving the ministry and going to seminary. He spoke of his life as being lived backwards, and his words resonated with me and with others who grew up in the Christian homeschool movement. Josh published his career-making book, I Kissed Dating Goodbye, in 1997, when he was only 21. His book had a huge impact on not only the Christian homeschool movement but also evangelicalism more broadly, and frankly, messed a lot of things up for a lot of us growing up in that culture.

Several years ago, even conservative evangelical World Magazine published an article critical of the impact Harris’s seminal book has had on the relationship culture of an entire generation of evangelical young people. But Harris is no longer 21. It has been nearly two decades since he published his book, and in that time he has married, had children, pastored a church, and weathered a denomination sex abuse scandal that threatened to take his congregation down with it. It is likely this last event that set him on his path toward seminary.

I’d heard rumors that Harris has become critical of the ideas he wrote in his book, though I had not seen these rumors directly confirmed. Then this morning I came upon this exchange on twitter: 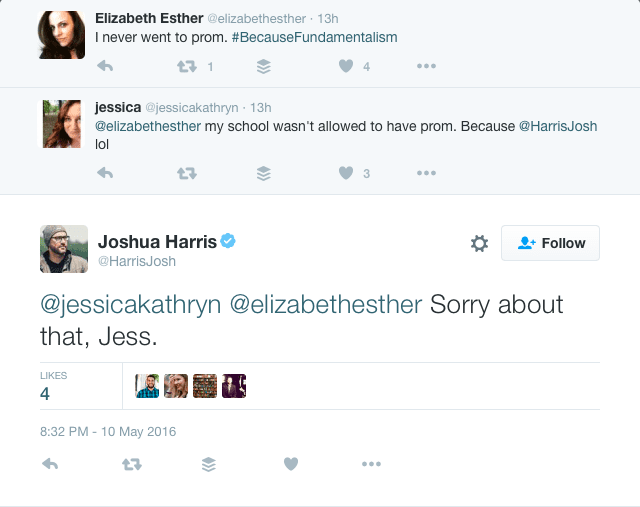 Yes, you read that right. Two individuals on twitter tweeted about not being able to go to the prom because of evangelical purity teachings, and when one referenced the role Harris played in that, Harris tweeted back that he was “Sorry about that.” This, frankly, is the beauty and magic of twitter, the way it can bring people into contact. The way Harris chose to respond was, of course, all him. I so appreciate the complete lack of defensiveness, and the simple sympathy shown instead.

After Elizabeth Esther asked if they could chat sometime, there was this:

Elizabeth Esther @elizabethesther
@HarrisJosh honestly, your book was used against me like a weapon. But now, I just feel compassion for the kid you were when you wrote it.

Joshua Harris @HarrisJosh
@elizabethesther I’m sorry. And I’m planning to dig into that in the next year or two. Again, I’d love to chat.

I read I Kissed Dating Goodbye for the first time when I was 14 years old, and immediately commenced shaming myself for my schoolgirl crushes. I tortured myself for years, desperately afraid that I was giving away pieces of my heart, never to get them back. There are women out there who married the first guy they dated because they believed, under the influences of Harris’s teachings, that they had given away a piece of their heart that they could never get back. It was no longer just about physical purity, it was also about what I’ve sometimes seem called “love virginity.” The stakes were raised. Dating around became akin to sleeping around, and both were seen as practice for divorce, which of course was bad, bad, bad.

But I never in all my years expected to see Harris apologize—directly, publicly, without reservation—to specific individuals for the harm his book did them.

I am of course curious why the book is still being sold, and without any caveat. I’d like to see Harris speak more openly against the larger, systemic and overarching problems his book created—and the problems that would have been there even had his book not exacerbated them. In other words, I want to see more. And Harris does promise more when he writes that he’s “planning to dig into that in the next year or two.” I, for one, look forward to reading what he has to say. 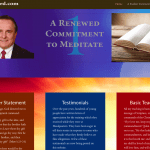 May 11, 2016
Bill Gothard and the Dynamics of Abuse
Next Post 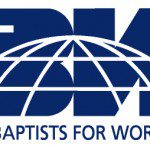