Thank the ACA, Not Restrictions, for Abortion Decline 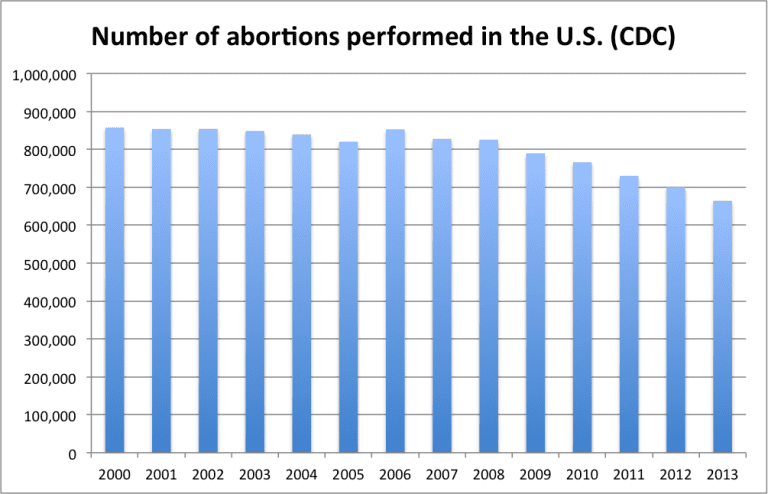 The number of abortions performed in the U.S. is falling. Anti-abortion groups are moving quickly to take credit for these declines. According to World Magazine:

Pro-life leaders attribute the overall decline in abortions to an increase in pro-life legislation and changing hearts.

“One element that may not be getting its due is the increasing sense among Americans that abortion is no real solution for mothers, for their babies, or for society in general,” National Right to Life’s Randall O’Bannon told me. “When they see the child moving in the womb on an ultrasound, when they hear the heartbeat of the unborn child, when they know there are people and programs available to help them with a new baby and new circumstances, when they see what dismemberment abortion does to these precious children, the pain and agony that is involved in every chemical abortion, they look for life-preserving solutions that are better for everyone involved.”

Clarke Forsythe, acting president of Americans United for Life, told me the use of ultrasound imaging has been key to the success of “life-affirming laws” passed in the last six years.

“Such pictures are worth more than a thousand words when it comes to helping people understand whose lives are on the line,” Forsythe said. “But all of this does not change the fact that we need a more complete picture of the impact of abortion on women, through verifiable tracking. Abortion isn’t about women’s health, it’s all about population control.”

And, according to Christianity Today:

Pro-life advocates welcomed the report, and pointed to the work of pro-life citizens and legislators as a reason for the dramatic decline in abortions and their rate.

“The falling abortion number is due to the ceaseless advocacy and ministry of the pro-life community in neighborhoods all around this country,” said Russell Moore, president of the Southern Baptist Ethics & Religious Liberty Commission (ERLC). “The pro-life movement advances by calling out to consciences with the truth of what unborn human life is and matching that call with real ministry to women in crisis.”

Americans United for Life (AUL), the country’s leader in helping state legislators pass pro-life laws, cited such policies, as well as technology, in explaining the trend.

“Research has shown that life-affirming laws do have an impact on lowering the number of abortions, and with all the life-affirming laws passed since 2010, we have a reason to celebrate the number of lives saved and women protected as legislators worked to defend them from a predatory and rarely accountable abortion industry,” AUL Acting President Clark Forsythe said in a written statement.

“But another factor in lower[ing] the number of abortions is the power of beautiful pictures of life inside the womb, through ultrasound,” he said. “Such pictures are worth more than a thousand words when it comes to helping people understand whose lives are on the line.”

That’s right—none of the anti-abortion leaders quoted in these articles reference birth control as a factor in declining rates of abortion. None. Let’s talk about this, shall we?

The Number of Live Births Is Also Falling

Let me ask you something—if the decline in abortion is the result of laws restricting abortion access, and through persuading pregnant women who might otherwise abort not to do so, what would you expect to see accompany a decrease in the number of abortions performed? An equivalent increase in overall birthrate, right? Well guess what? We don’t see that. We see the opposite.

Fewer women are having babies today than at any time in the past. The birthrate in the United States is at an all-time low. There were almost 100,000 fewer live births in 2013 than there were in 2000. At the same time, the number of abortions performed is also falling. There were almost 200,000 fewer abortions in 2013 than there in 2000. You cannot look at these numbers and not see that there is another variable here—namely, that fewer women are getting pregnant.

Have a look at this super handy chart (by yours truly): 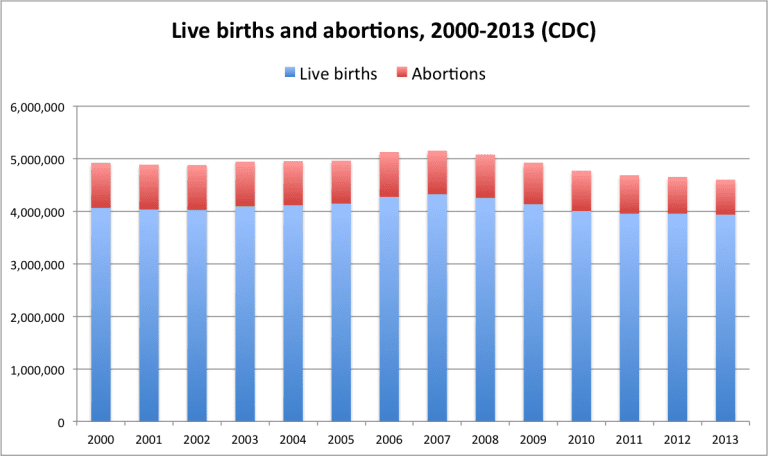 The blue is the number of live births. As you can see, it was just above four million per year in 2000, then rose from 2006-2008 when the economy was good, then fell to just under four million by 2013 (the last year for which the CDC data on abortions). Bear in mind that the United States’ population grew by 12% between 2000 and 2013, so the drop in birth rate when comparing 2000 to 2013 is actually more significant than it looks in the above chart.

Why are fewer women becoming pregnant? It is theoretically possible that fewer women are having sex, and there are indeed studies that suggest teens are having less sex today than in the past. However, teen births and teen abortions were only ever a small fraction of the overall number. A likelier explanation is improved use of birth control, including longterm contraceptives, which are more reliable than other, more common methods. According to Guttmacher:

The percentage of contracepting women who use longterm birth control methods such as the IUD or the implant increased from 2% in 2002 to 12% in 2012. This jump in use of longterm birth control methods is substantial and has been much talked about. Having these devices implanted can be pricy—as much as $900—and before the ACA women with insurance frequently had to pay part or all of this fee (and Medicaid did not always cover IUDs). The ACA granted millions more women access to these methods, which are more effective than condoms or the birth control pill.

The rate of unplanned pregnancy is falling

It’s not just the overall number of abortions being performed that is falling, it’s also the number of abortions performed per live birth. A woman who gets pregnant today is less likely to abort than was a woman who got pregnant in, say, 2000. Could that be the result of abortion restrictions, or of successes in persuading women not to abort? Theoretically, yes, but there are other points to consider—for example, the rate of unintended pregnancy rate. Have a look at this from Guttmacher:

Following a long period of minimal change, the overall unintended pregnancy rate (the number of unintended pregnancies per 1,000 women aged 15–44) decreased substantially from 54 in 2008 to 45 in 2011, a decline of 18%. This is the lowest rate since at least 1981 and is likely due to an overall increase in contraceptive use and the use of highly effective methods.

Is there a way to test whether restrictions like mandatory waiting periods and clinic closures have prevented women from obtaining abortions they would have obtained in the absence of these laws? Curious, I compared state-level abortion rates from 2009 and with those from 2013 (the most recent year for which we have data) and found the rate of change in each state. That is the question, right—what is causing the change? If the drop in abortion rates is being driven by restrictions on abortion, we would expect to see the steepest declines in the states with the greatest restrictions. So I looked at which states received F ratings from NARAL in 2013, and which received A ratings.

I’ve said it before and I’ll say it again—access to effective birth control cuts down on the number (and rate) of abortions performed. This isn’t just an abstract idea, it’s tested reality. Check out these numbers from 2015:

Over the past six years, Colorado has conducted one of the largest experiments with long-acting birth control. If teenagers and poor women were offered free intrauterine devices and implants that prevent pregnancy for years, state officials asked, would those women choose them?

They did in a big way, and the results were startling. The birthrate among teenagers across the state plunged by 40 percent from 2009 to 2013, while their rate of abortions fell by 42 percent, according to the Colorado Department of Public Health and Environment.

Or check out this St. Louis study, mentioned in a 2014 article:

The 14- to 19-year-old participants in the study Ms. House joined, nearly half of whom had already had an unintended pregnancy, were offered free birth control and counseled on the benefits of long-acting contraceptives like intrauterine devices and implants, methods used by fewer than 5 percent of teenagers.

Overwhelmingly, Ms. House and other teenagers — 72 percent of the 1,404 participants — chose long-acting birth control. And it had an enormous effect.

Pregnancy and abortion rates plunged to less than a quarter the rates of sexually experienced teenagers nationally, the group most comparable to those in the study. Rates were also significantly lower than those among all teenagers.

That the anti-abortion leaders quoted in the articles at the beginning of this post could take credit for the declines in abortion numbers while failing to even mention the role played by increased birth control access and growth in the use of more effective longterm birth control measures is absolutely reprehensible. That they could credit the decline to convincing women to keep their pregnancies despite the accompanying drop in live births numbers is surreal. That they could credit abortion restrictions despite the fact that states with A ratings from NARAL have seen greater declines in abortion rates than states with F ratings boggles all imagination.

No way am I going to let these abortion opponents deny Obama, the ACA, and changing patterns of birth control use credit for the role they have played in decreasing the need for abortion. There are ways to decrease the number of abortions performed without decreasing the number of options available to women, or women’s control over their bodies. And yet, abortion opponents frequently decry the very things that would do this—consider the conservative outcry against the birth control mandate. It’s time to say enough is enough. They do not control reality.

If you like what I’ve said here and you haven’t already read it, you may be interested in reading my all-time favorite post, How I Lost Faith in the Pro-Life Movement. 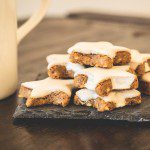 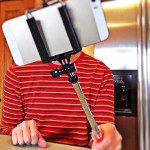