James McGrath just shared this image on his blog: 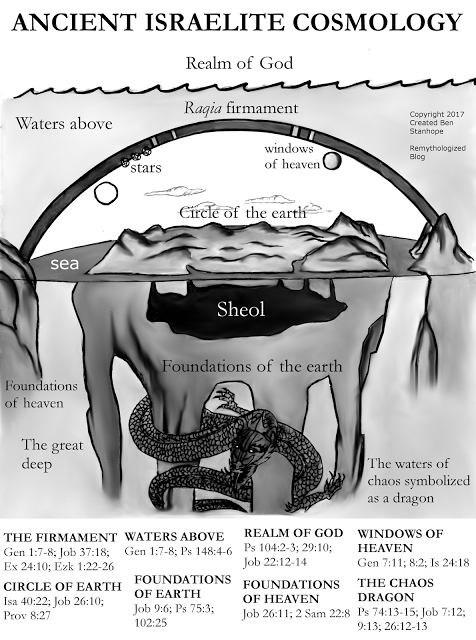 I might quibble about minor details – for instance, I think that when Genesis talks about the waters gathering together into one place called “seas,” it has in mind the Mediterranean and adjoining seas in the midst of the land, and not oceans as yet unexplored around the edges.

I’m sure one could quibble with other details in the artist’s representation above, but the point remains—the cosmology of the Ancient Israelites was similar in many ways to the cosmologies of other ancient societies (and native societies today), and fundamentally different from the scientific cosmology we adhere to today. These cosmologies played (and in some cases continue to play) a specific role, helping societies formulate and understand their place in the world. However.

Scholars like Karen Armstrong have argued that societies have traditionally had two different ways for determining truth and creating meaning: mythos and logos. According to Armstrong, “Myth was not concerned with practical matters but with meaning” while “Logos was the rational, pragmatic and scientific thought that enabled men and women to function well in the world.”

Incumbent in Armstrong’s mythos/logos conception is an insistence that the ancients cared more about myth creating meaning than they did about whether myth was true in a practical sense. I’m not sure whether this was the case. However, what is clear that in the past five hundred years we have developed new ways to test truth claims about the universe.

That the ancients’ cosmologies would turn out to be scientifically incorrect is perhaps not surprising. The ancients’ experience and instruments were limited and they had to create their cosmologies using what they had at their disposal. They did not have our communication and transportation systems, our satellites, our space probes.

What is surprising is not that the ancients’ cosmologies turned out to be incorrect in a scientific sense but rather that so many evangelical Christians insist on basing their understanding of the universe on the words of the ancients’ rather than on the discoveries of science.

I grew up in a young earth creationist evangelical Christian home. One thing I remember hearing is that the Bible is 100% trustworthy in matters of science. In fact, this was offered as a proof of the Bible’s truth and accuracy—that even living in an era without scientific instruments, every scientific fact mentioned in the Bible was true and accurate. In other words, it wasn’t just the first chapter of Genesis my evangelical community believed was scientifically accurate, it was every single word.

This is actually one thing that started to bug me as I began to have exposure beyond evangelical circles. For example, Jesus claims that the mustard seed is the smallest of all seeds, but it is not. I found evangelical explanations of this profoundly unsatisfactory. But I also began to wonder why it was so important to insist that the Bible was scientifically correct when it was written at a time when the ancients had a very different understanding of the world around them than we do today.

Perhaps the Bible refers to “the four corners of the earth” because those writing it were influenced by Egyptian cosmologies, which held that the earth was flat, the sky suspended by a mountain in each corner. Perhaps the New Testament references “the four winds of the earth” due to the influence of Greek and Roman thinking at the time the passage was written. But those who insist that the Bible can be read as a science textbook find themselves in the unfortunate position of having to explain these away.

But the problem is even bigger than that. Based on Genesis 1, it appears that the Ancient Israelites believed that there was water above the sky, and that the sky acted as a “firmament” holding it back and separating it from the water on earth.

Rather than accept that the Ancient Israelites had a different cosmology than we do today, one that is not in line with a verifiable scientific understanding of the world, many young earth creationists have taken this ancient cosmology and built it into their understanding of the world. The result is a strange mish-mash of modern science (the earth and the other planets revolve around the sun) and ancient cosmology (there was a canopy of water around the earth which fell to the earth during the flood).

Those young earth creationists who subscribe the canopy theory argue that when this canopy of water fell to the earth, the climate changed from a warmer, more oxygen-rich environment to one that was colder and comparatively oxygen-poor; this was the dawn of the ice age, and ultimately killed those dinosaurs who survived the flood on the Ark.

Can you see what’s happening here? Young earth creationism involves taking statements and stories that stem from an ancient cosmology like that in the image at the beginning of this post and apply them to our modern understandings of the world, attempting to integrate with modern science ideas that were created when human understanding of the world was limited and profoundly mythological. That, in a nutshell, is the core of what young earth creationism is.

It doesn’t have to be this way. There are many Christians who believe that the Ancient Israelites were writing from their limited understanding of the world, explaining their experiences from their perspective at the time. The first chapter of Genesis does not have to be literally true for it to be a group’s understanding of God and his creation at the time. We can better understand what is going on here when we remember that young earth creationism as we know it originated within early twentieth century fundamentalism, which was a reaction against “modernist” understandings of the Bible—a reaction built upon an insistence that every word of the Bible was innerant and infallible.

In that sense young earth creationism, too, is a product of its time. 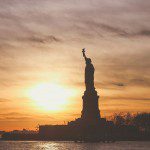 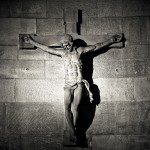 March 8, 2017 Voting for Trump with Jesus in the Room
Recent Comments
0 | Leave a Comment
Browse Our Archives
get the latest from
Nonreligious
Sign up for our newsletter
POPULAR AT PATHEOS Nonreligious
1