Some weeks ago, while taking a long walk, I came upon a Catholic church. I went in. I breathed deeply and looked up, up, up at the rafters and around at the beautiful, familiar setup of the church. I grew up in an evangelical home and converted to Catholicism in college, but I am no longer religious today. Still, because I came to Catholicism at a time of turmoil and found some temporary peace there, I enjoy walking into a Catholic church and basking in the stillness and familiarity.

Some weeks later I happened to enter a similarly old and similarly grand Protestant church. I was struck, suddenly, by a feeling of intense maleness. The familiar statue of Mary present in every Catholic church was absent. In its place were male apostles and male leaders of the Reformation, carved in wood. Everywhere I looked I felt the absence of women, the absence of any feminine presence. The building was beautiful, but I could feel the severe patriarchy of the Reformation seeping into my bones.

In a side chapel in the Protestant church I came upon a triad of statues. All three were men—Jesus and two others. I was struck by the statutes. When a Catholic church displays such a triad, one of them is often Mary. Not so here. And it’s not just the presence of Mary that offers space for women. The church I had visited weeks earlier was named for two female saints, and featured statues of each. The Catholic Church features a pantheon of female saints, and allows women to choose a religious vocation.

Again, I am not trying to downplay Catholic abuses. Women were often forced into convents for various reasons, and convent schools and the homes they’ve run for “fallen” women have often ranged from harsh to horrific. But consider that within Protestantism, women have typically been limited to one role—wife and mother—and that women play little public role in Protestant history or tradition.

Debi Pearl’s latest book is titled “The Hidden Help Meet: Stand By Your Man.” Debi describes the book as follows: “In a brilliantly touching way, The Hidden Help Meet recounts the experiences of women who changed the course of history by supporting their men.” While Debi is not representative of either mainstream evangelicalism or mainline Protestant denominations, her focus on women making their mark on history by standing by their man is in no wise hers alone, and it stands in marked contrast to the greater room for individual agency women have had access to within the Catholic Church.

Let me offer you an example. The only woman I can think of who obtained quasi-saint status in the evangelical home of my youth was Susanna Wesley. She was praised for standing by her man through her husband’s poverty and for raising 19 children, two of whom went on to be famous evangelists and revivalists. She was a wife; she was a mother. She fulfilled her role. In contrast, when I converted to Catholicism I chose St. Clare as my patron saint. St. Clare refused to marry the man her wealthy father had chosen for her. She ran away, escaped recapture, and went on to found her own order of nuns.

Did you know that you have no written works by women during the Protestant Reformation? The Reformation was profoundly masculine—and not by accident. In the areas they controlled, the (male) leaders of the Reformation closed convents and sent nuns off to be married, closing women more firmly out of religious life than they had been under the Catholic Church. “The rule remains with the husband, and the wife is compelled to obey him by God’s command,” wrote Martin Luther.

“He rules the home and the state, wages war; defends his possessions, tills the soil, builds, plants, etc. The woman on the other hand is like a nail driven into the wall … so the wife should stay at home and look after the affairs of the household, as one who has been deprived of the ability of administering those affairs that are outside and that concern the state. She does not go beyond her most personal duties.”

Do we have the writings of Catholic women, in contrast, both from that time period and from others? Yes, actually. Yes, we do. As patriarchal as the medieval Catholic Church was, the Protestant Reformers were far more so. The result is that a Protestant church like the one I visited recently, built in a grand style and decorated primarily with statuary from the Reformation, won’t display women. Instead it will display men, men, men, as far as the eye can see.

When I first began considering Catholicism, in college, I had a Catholic friend who was devoted to the Little Way of St. Therese of Lisieux. I don’t know of any corollary in the Protestant tradition. And in some sense, how could there be? Traditionally, most of Protestantism has allowed women to have platforms only to tell other women to be good wives and mothers. In fact, the church where I attended AWANA (Bible club) as a child went through turmoil over whether a woman should be allowed to serve as a leader for the high school group, as teenage boys were very nearly men and a woman was never permitted to teach men.

Because the Catholic Church only allows male priests, and because its leadership is dominated by men, some atheists I have encountered have wondered how I could go from a patriarchal evangelicalism to an equally patriarchal Catholicism. It didn’t feel that way at all. In the Catholic Church, I saw myself represented. The veneration of Mary was especially important to me, in a world where God was and always had been male. The female saints, the existence of a religious vocation—I felt valued. I felt seen.

I realize that not all will have the same experience, particularly those who grew up within the Catholic Church and felt limited there, ignored or unseen. Still, I think there is something to be gained by contrasting the profound maleness of Protestant history with the greater ambiguity of Catholic history. If nothing else, Protestant churches that now ordain women should remember that simply ordaining women is not enough. There is also a history to be scrutinized and a set of imagery to be questioned and revised. 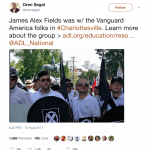 August 14, 2017
White Supremacists and Parents in Denial
Next Post 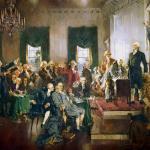