I wasn’t surprised to find, this morning, that a blog post I wrote in 2013, Child Marriage and the Rest of the Maranatha Story, had regained legs and was making the rounds. In the wake of recent revelations about Roy Moore, it is worth noting a not insignificant portion of conservatives don’t have a problem with relationships between very young teens and adult men.

Where to start? For years, a story circulated within homeschool circles about the courting of a girl named Maranatha. The story was a staple of purity culture courtship narratives. And by courtship, I mean literal courtship. Courtship is not just another term for dating. It means something entirely different. To court a woman, a man must ask permission of her father, and the interactions between the two are carefully chaperoned and monitored. Marriage is the explicit goal.

I grew up hearing these narratives as a young evangelical homeschooled girl. Because marriage was the object, courtship was not to be embarked upon until both individuals were at a place in their lives where they were ready to marry. The trouble was that that meant something different for men than it did for women. A man must be able to provide for a family. He must have a job and a home to bring his wife into. A woman, in contrast, must be able to cook, clean, and care for children; most girls in my community could do that by the time they were thirteen.

Maranatha was 13-years-old when Matthew Chapman first approached her father. She was married when she was 15 and Matthew was 28. This age difference may seem appalling to those in secular circles, but within conservative evangelical circles it made sense. At 28, Matthew would be able to provide for his wife. And by marring at 15, Maranatha would avoid any potential sexual sin she might encounter if she did not marry until her mid-twenties.

She would be protected. Safe. For some, this age difference is viewed as a bonus. An older husband, after all, has the life experience needed to provide for and take care of a younger wife. And it’s Biblical. As Alabama State Auditor Jim Ziegler pointed out yesterday, while defending Moore:

Natalie Greenfield was 14 when Jamin White, 24, approached her parents and expressed interested interest in her. Natalie’s parents told Jamin to wait until she was 18, and that they would readdress the question then. The problem is that, because of the conservative culture they were surrounded by—this happened in controversial conservative Doug Wilson’s Moscow, Idaho—Natalie’s parents didn’t see Jamin’s request to court their 14-year-old daughter as a warning sign. Instead, it seemed to signal that Jamin was an upstanding, respectable, serious young man.

Jamin took advantage of this perception and spent the next several years sexually molesting and raping horrifically Natalie. When Natalie finally got up the courage to go to her parents—Jamin had used threats to keep her silent—they reported the crime and prosecuted Jamin. Her community, meanwhile, turned against her. There was no abuse, they said. The entire sordid affair was a consensual relationship that she had kept hidden from her parents. She, 14. Him, 24. 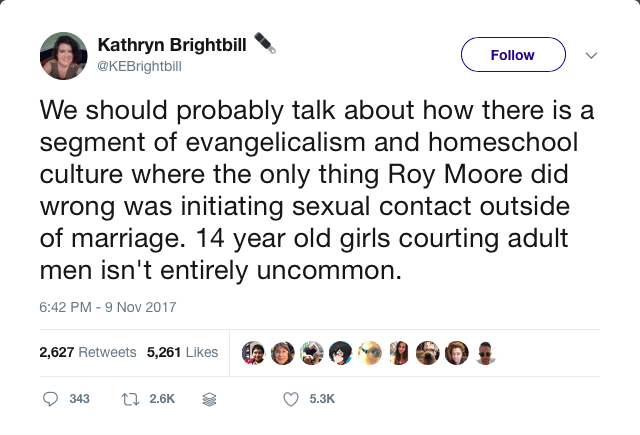 Text: We should probably talk about how there is a segment of evangelicalism and homeschool culture where the only thing Roy Moore did wrong was initiating sexual contact outside of marriage. 14 year old girls courting adult men isn’t entirely uncommon.

Courting is a term specific to these communities. It does not imply agency. The agency, in courtship culture, belongs to the man. A man becomes interested in a girl. He approaches her father and asks for his permission to court her. At this point the father talks to the girl, to find out whether she is interested, but let’s be honest here—how much agency does a sheltered 14-year-old homeschool girl have, particularly when she has been taught that her role in life is that of wife and mother, and that she is to obey her father until he gives her away in marriage?  And remember—she is still a child.

The father determines what the courtship will look like. In the most strict courtship, the couple is never allowed to be alone or to have any physical contact (including holding hands). When the man is ready, he approaches the girl’s father and asks his permission to marry her. The father may say he doesn’t think they’re ready, or may give the man tasks to complete. When the father approves the match, the man is free to ask the girl to marry him. And again, I ask you, what agency does the girl truly have? Her choices are bounded. What comes next? Well, let’s just say that long engagements are frowned upon.

Some years ago, someone I knew growing up was sent to prison for crossing state lines to have sex with a 14-year-old girl he’d met on the internet when he was 21. The conservative homeschool community we had both grown up in rose to his defense. They blamed the girl. They claimed she had initiated everything, they said she was sexually experienced, that she was a slut. She led him astray. That she was only 14 suddenly didn’t matter. That a 14-year-old girl is a child was irrelevant.

Is it any surprise that some conservatives have responded to the allegations surrounding Roy Moore by claiming that the young teens he preyed on were probably the ones pursuing him? Because we all know that 14-year-old girls are temptresses, after all. They know the hold they have over grown men, and they wield it as a weapon—or so the narrative goes.

There’s another aspect to this, too. In conservative evangelical culture, wives are expected to submit to and obey their husbands. When I left home for college, there were friends of my mom’s who begged her not to let me go. It would ruin me as wife material, they said. I would become to independent and would never be able to submit to a future husband. If a father marries his daughters off young, before they’re adults with independent life experience, so much the better.

At a Sportsmen’s Ministry talk in 2009, Robertson had some advice for a young man.

“Make sure that she can cook a meal, you need to eat some meals that she cooks, check that out,” he said. “Make sure she carries her Bible. That’ll save you a lot of trouble down the road. And if she picks your ducks, now, that’s a woman.”

The Duck Commander company founder added: “You got to marry these girls when they are about 15 or 16, they’ll pick your ducks. You need to check with mom and dad about that of course.”

He went on to say that the Bible gave Americans the right to hunt.

And Robertson practices what he preaches. He began dating his wife, Kay, when she was only 14 and he was 18. They waited until Kay was 16 to get married.

As Kathryn Brightbill noted, for some conservatives Roy Moore’s mistake was not in pursuing young teenage girls but in engaging in sexual activity. And even here, there is a tendency among some conservatives to view teenage girls as temptresses out to get older men. Why did the woman who has come forward to accuse Moore of sexually molesting her when she was 14 get in his car and go to his house with him, after all? Moore’s mistake, then, was not having the moral fortitude to resist her womanly wiles.

Lest you think I am making this up, I’ll remind you of what I watched happen in the conservative community in which I grew up. “He was led astray by the wayward woman, just like in Proverbs,” they said. “That is the lesson he has learned.” What does Proverbs say, exactly? “With her many persuasions she entices him. With her flattering lips she seduces him. Suddenly he follows her, as an ox goes to the slaughter.” Teenage girls are not victims. They are vixens. Or so the logic goes.

I am not saying that every conservative, or every evangelical, views things this way. That is thankfully not the case. This view, however, is out there. It is not as fringe or isolated as it should be, and it is shaping some of the response to yesterday’s allegations against Roy Moore. 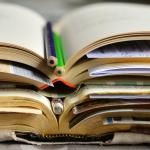 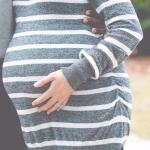