Doug Wilson Moves the Goalposts on Evidence and Abuse

It’s been a while since I’ve written about Doug Wilson. He’s a troll who likes to provoke, and I grew tired of responding to his bait and giving him the attention he craved (more on that in a moment). And yet here we are.

For many years, Wilson has insisted that allegations against church leaders should only be entertained on the authority of two or three witnesses. The result has been a defense of accused abusers against the allegations against them. Women’s testimony is discounted and put aside—not to be considered unless there are two or three witnesses. In the scandals that have taken down Paige Patterson, however, there have been emails and departmental records.

I avoided reading Doug Wilson’s defense of Paige Patterson, which I knew would come—and it did. But I did read Jake Meador’s article taking issue with Paige Patterson’s defenders, and Meador referenced a Wilson’s blog post on the issue:

Wilson in particular cites the biblical precedent for 2-3 witnesses and then claims that there are not 2-3 witnesses in this case.

There are two problems here.

Second, it’s actually not true that we have fewer than 2-3 witnesses. We have, to the best of my knowledge, 10 witnesses.

It’s not just an issue of recordings and emails. It’s also an issue of student records maintained by the seminaries in question. I was curious, then, how Wilson would wiggle out of this.

We are not supposed to even entertain an accusation against an elder (and Paige Patterson certainly fits this description) unless there is independent confirmation of the accusation. The charge needs to be clear—clear enough that different people can know they are talking about the same thing. Is the charge corroborated? The board said that they had a student record that contradicted an earlier statement by Patterson. Was the content of that record independently corroborated?

Yes, this really is how far Wilson goes.

That, perhaps, is the real issue with Wilson’s demands for evidence—nothing will ever be enough. There’s a moving of goalposts. An individual’s word is not enough—even when a newspaper interviews those who knew about the situation at the time and verified her account—because she is only one witness. University records kept during the case in question cannot be trusted unless they are “independently corroborated” (which means what, exactly?). Nothing is enough.

(Can universities fake their records? Sure! But in this case, the records reflect badly on the university and its actions, not the other way around. What is the claim here—that the woman accusing Patterson of mishandling her rape broke into the seminary and doctored the records to support her version of events? It’s an excuse for disbelief, nothing more.)

Predictably, Wilson takes issue with the Board of Trustee’s allegation that Patterson was an enabler of abuse—becuase what is meant by abuse anyway? Wilson wrote as follows:

What, specifically, do you mean by “abuse,” and what, specifically, do you mean by “enables abuse”? Clearly Dr. Patterson was in view here as an enabler of abuse, but what are the precise boundaries of this enabling? Is it enabling abuse to encourage someone to stick it out in a troubled marriage? Given that you cited the enabling of abuse as your reason for terminating Dr. Patterson, could you please supply us with your definition of abuse, and your definition of enabling?

Before I close, I want to offer a few more thoughts on Wilson. There are some things that badly need saying.

I’ve heard from readers who (rightly) objected to my describing Wilson as a “controversial evangelical pastor” rather than as a racist pastor (he published a book praising race relations under slavery in the antebellum South as the best the world has ever seen) who preaches female submission to male authority, has recommended the death penalty for homosexuality (he offered exile as another acceptable option), and has urged judges to be lenient to child molesters.

Doug Wilson is the kind of person who ought to have no platform at all outside of a little-read blog and perhaps a YouTube channel followed by a handful of fellow trolls. And yet somehow, Wilson has a large platform within American evangelicalism. Some of the best-known names in evangelicalism today—men like John Piper—include him in conferences, interviews, and other opportunities. His articles are published on major evangelical websites.

Wilson is a noxious troll who should be shunned by the evangelical community—and yet he is not shunned. His views are horrific, and yet he is embraced.

When Natalie Greenfield was horrifically sexually abused, at age 14, by a 24-year-old seminary student of Wilson’s, In letters to officials, Wilson lied about the situation, claimed that it was a consensual love affair, and blamed Natlie’s parents for letting her abuser board with the family (Wilson offers no dorms for his seminary students, instead advising them to board with families in the church and community). Under the influence of the narrative fed him by Wilson and others in his church, the judge chose leniency and described the situation a “homeschool teenage love affair.” It was not.

That Wilson—who, by the way, is completely unrepentant of the way he treated Natalie—can still have the influence and positive name recognition that he does among evangelicals is absolutely appalling. And yet, that is the world we live in.

And with that, I’ll go back to studiously ignoring him. 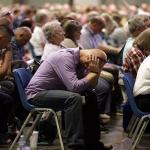 June 11, 2018
Would a Female SBC President Usurp Authority Over Men? This Framing Is Broken.
Next Post 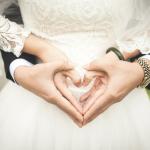