Did you hear that Wheaton College is suing Chicago’s Millennium Park?

According to a write-up in Christianity Today:

Right now, Wednesay morning, a group of Wheaton College students is in downtown Chicago, announcing a lawsuit related to a revision in the Millennium Park Rules. These new rules limit access to public parks for evangelistic activity.

How did this start? Christianity Today interviewed Mauck & Baker, the law firm representing the students to find out:

The circumstance began on December 7, 2018, when two of the four Wheaton College students engaged in street evangelism on the sidewalk between Millennium Park and Michigan Ave. Park staff told them they were not allowed to hand out their literature or preach and the students stopped.

Later that day, one of the other students showed up at the park and began open air preaching at The Bean. Once again, park staff told the Wheaton student that he was not allowed to preach.

This continued until April 5, 2019, when one of the students was approached by park staff while preaching and informed the student of newly enacted rules governing the park and that his evangelism was violating the new rules. Subsequently, the Wheaton students have stopped gathering at the Park altogether.

As I read the article, however, I became increasingly confused. Were the students completely banned from preaching and pamphleting in Millennium Park? What did the new rules say?

According to Mauck & Baker:

In March of 2019, the city sent a letter to the students’ legal counsel admitting park staff’s wrong-doing during the December 7th incident.

Wait. The December 7th incident? I had to scroll up to remember what that was. It was the incident where the students being asked not to engage in street preaching on the sidewalk between Millennium Park and Michigan Avenue. Why did the city apologize for this?

Mauck & Baker never quote or link to the Millennium Park rules. They state only that the city rule “restricts free speech to one corner of the park.” Which corner? Why are there no specifics here? And why isn’t the rule in question linked, or at least quoted?

I did some digging, I found the rules.

At issue is this bit:

The making of speeches and the passing out of written communications shall be restricted to Wrigley Square and Millennium Park Monument and the sidewalks in and around the park, though closed sidewalks, whether for an event or another reason, shall not be available for this purpose.

According to Mauck & Baker, the city “restricts free speech to one corner of the park.” But that’s not what these rules actually say. Mauck & Baker never let on in any way that speech making and pamphleting is allowed on the sidewalks “in and around the Park.”

Do you know what frustrates me? It’s the obfuscation. 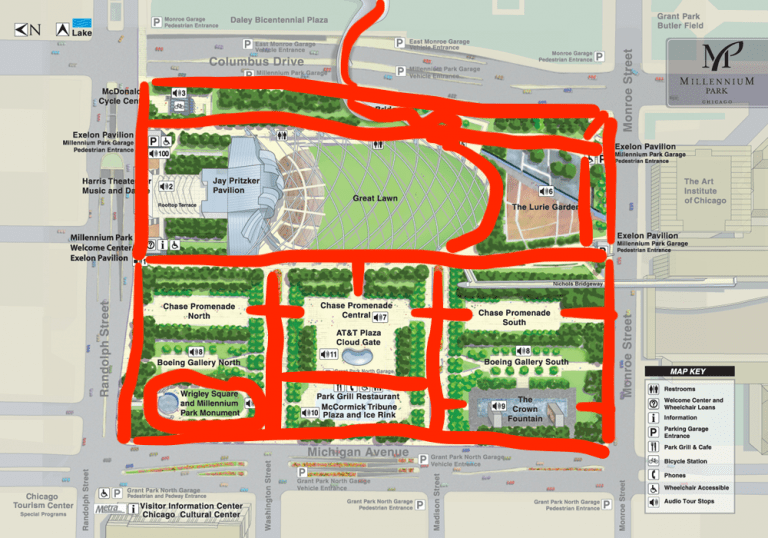 (Wrigley Square and Millennium Park monument are circled in the lower left corner. I thought about shading that whole area, but I couldn’t figure out how to do that without covering over the area’s name and thus making it difficult for people to find it on the map.)

Read the article. Mauck & Baker clearly want readers to think preaching is only allowed in “one corner” of the park, so much so that they leave out what seems like a crucial point—that speech making and pamphleting is also allowed on sidewalks “in and around the park.”

One of two things is going on here. Either Wheaton College simply wants to engage in a lawsuit where they position themselves as being persecuted for their religion, or Wheaton College students had made a habit of giving speeches and pamphleting at The Bean, and aren’t okay being moved to the sidewalks (if this is the case, Mauck & Baker should be honest about it). And indeed, one of the incidences Mauck & Baker cite involved open air preaching at The Bean.

To the first point, I didn’t know until I looked up the rules and read them for myself that sidewalks in and around the park are available for street preaching and pamphleting. Given that, the students’ lawyers—Mauck & Baker—come across as highly disingenuous.

To the second, when it comes to lawsuits like this, we always need to take a moment to swap out the plaintiffs for other groups. What if a local college’s environmentalist club wanted to make open air speeches about climate change by The Bean? Or a local Black Lives Matter group? What if Planned Parenthood was pamphleting? Would we be okay with them being shuffled off to the sidewalks, and away from the plaza where The Bean is located?

I’m honestly unsure as to the answer. I’d want to hear from First Amendment lawyers and law professors before determining whether such actions would be reasonable. We should all want to be careful not to unduly restrict free speech, whether or not we agree with that speech.

I also have some pretty serious questions about creating “protest zones” and “free speech zones.” This summer, similar rules led to the arrest of a professor in Bloomington, Indiana, who was protesting a white supremacist farmers market vendor, and refused to stay in the “designated protest area.” She was only holding a sign, not posing a threat to anyone.

According to an article published this weekend, protestors have found a way to get around the rule by printing “boycott” T-shirts with the name of the white supremacist vendor’s stall. You know who was never required to stay in the designated protest area? The Three Percenters, who were armed, and stayed right by the white supremacist vendor’s stall.

All of this is to say that I’m pretty sympathetic with the Wheaton students’ case. Designated protest areas are bullshit. I would feel better, though, if their lawyers were honest about the facts. Continually stating that the students are being restricted to one corner of the park, when in fact all of the sidewalks are also included in their allowed area, does not endear them to me.

Let’s proceed to the third point.

I’ve been to The Bean. It’s a huge metal sculpture that creates incredible reflections. It’s a popular place for tourists to walk around and take pictures. So many tourists. I suspect that what’s really going on here is that the city does not want open air street preaching at The Bean. 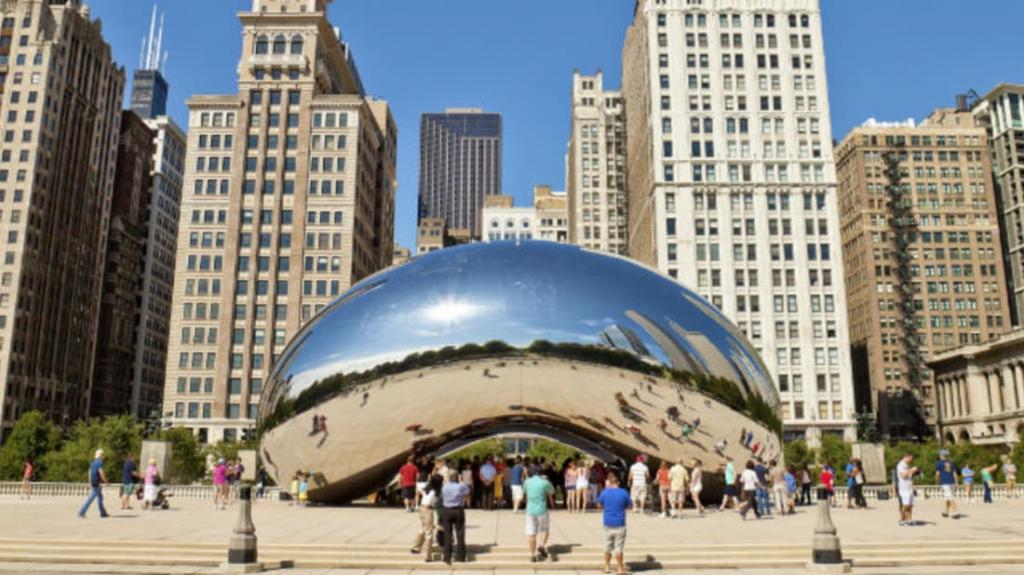 Things going our way will be in the form of a court order preventing the city from enforcing the sections of the Millennium Park Rules that restrict free speech. Subsequently, visitors to the park will enjoy a greater taste of our city’s cultural diversity of ideas.

That last bit gives me a pretty strong feeling that this really is just about The Bean. Having evangelical street preachers at The Bean, the argument seems to go, will send a message about the “cultural diversity of ideas” present in Chicago. In other words, visitors won’t be able to come to Chicago and hit all of the tourist hot spots without also being hit with the gospel.

I don’t think the Wheaton students realize that street preachers are, frankly, annoying. I used to encounter street preachers on campus when I was in college and grad school, standing there yelling at at students about sin and hell and salvation and the like. No one likes that. And it’s not about feeling guilty! I don’t like the people who stand outside of AT&T and try to get me to stop and talk to them about switching my cell phone plan, either.

I’m also unconvinced that street preachers are particularly productive. Isn’t it fairly common wisdom among evangelicals today that conversions come through building relationships? Through personal connections? Will subjecting people to a sermon they didn’t ask for, in a place they came to to snap a picture and enjoy the sights, actually lead to the results?

Color me skeptical. But, again, whether open air preaching in a public place is considerate (or productive) is a different question from whether such should be allowed.

Finally, let’s take a moment to contextualize the city’s move. There is a public restroom near The Bean. When you go inside, you’ll hear an annoying loud buzzing sound. It’s not a broken light fixture. While I could be wrong, I believe I know what it is. I’ve experienced it before. That sort of sound is meant to keep homeless people from coming in and cooling off, or getting warm. It ensures that people will use the toilet and get out of quick, without hanging around.

In the last election, the city came under scrutiny for a disparity between improvements made to the city center, on the one hand, and a lack of investment in many neighborhoods, on the other.  When it comes to Millennium Park, the city wants everything to be perfect—for tourists, and for commuters and others who work in the downtown areas. That means keeping homeless people out of park’s public restrooms—and it means keeping open air preaching away from The Bean. It’s not about religion. It’s about creating a perfectly tailored tourist experience.

So maybe, in that context, allowing open air preaching would introduce tourists and other visitors more fully to the city’s cultural diversity, inasmuch as it would introduce them to the city, and not just a fun reflective sculpture and a beautiful skyline. And maybe, just maybe, turning off the homeless repellant sound in the public restrooms would do something similar. But that’s also not really the story Mauck & Baker are interested in telling. 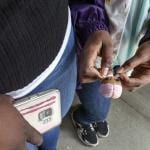 September 30, 2019
The Case Against School Resource Officers
Next Post 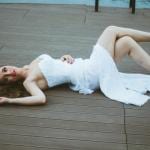