Christian Publisher Compares Opposition to Trump with the Rwandan Genocide

Stephen Strang dedicated his most recent podcast to reading his latest column for Charisma Magazine, in which he asserted once again that opposition to President Donald Trump is driven by satanic forces.

In his column, Strang writes as follows:

You can understand these horrible things better when you realize that both God and Satan operate in the earth through people.

Yes, Strang really did just call opposition to the Trump administration an “unspeakable evil” understandable only when seen in spiritual terms, like Hitler’s Nazi Germany and the Rwandan genocide.

If we’re going to talk about things like concentration camps or sewing ethnic hatred, it’s Trump we need to talk about, not his opposition.

Last week I came across several news reports about asylum seekers waiting at the U.S. border under the Trump administration’s “remain in Mexico” policy. In one, I learned that many children are falling ill after months of living in tents and mud, and that some parents are sending young sick children across the border alone, with instructions to turn themselves in to border agents, in hopes that they will be able to access medical care and sanitary conditions. In another report, I heard stories of asylum seekers kidnapped by gangs and cartels while waiting in Mexico for their cases to be heard—with border agents in on the take.

There are refugee camps along our southern border sporting dangerous and unsanitary conditions, and our administration is doing nothing about it. Our administration created this problem, but we’re to imagine that the real problem is the vengeance with which some people hate Trump. Right.

Meanwhile, Rick Perry has declared Trump “the chosen one.”

God used imperfect people all through history. King David wasn’t perfect, Saul wasn’t perfect, Solomon wasn’t perfect. And I actually gave the president a little one-pager on those Old Testament kings about a month ago. And I shared it with him. I said, “Mr. President, I know there are people that say, you know, you were the chosen one. And… I said… you were!

There are a thousand and one Bible verses about welcoming the foreigner and the stranger. Or did those verses fall out of the Bible when I wasn’t looking?

Strang’s allusions to spiritual warfare are pretty damn convenient, when you think about it. They allow him to both demonize his opponents and dispense with any need to try to understand why people feel the way they do. There were a million and one pieces exploring the id of the Trump voter in 2016, but Strang doesn’t have any need to similarly explore what is motivates Trump’s opponents—he can call it the devil and wash his hands of it. 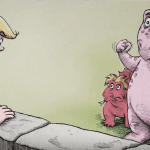 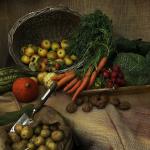