Could Noah’s Ark Have Been Made of Wood? reads an Answers in Genesis headline. What interested me more was the summary on my feed reader. 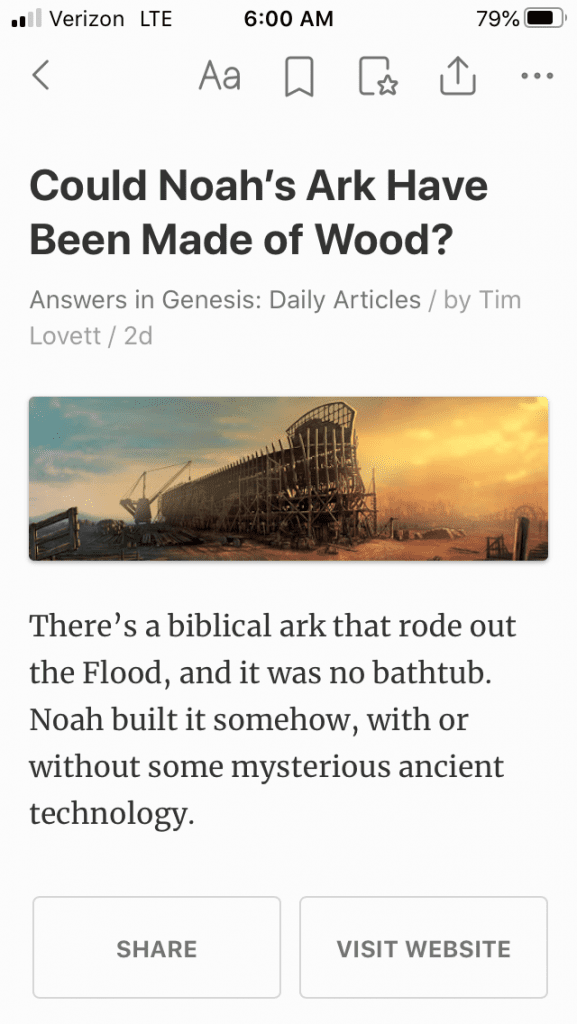 But these summaries that show up in feed readers are selected by the author, not the feed reader service. Indeed, the article itself leads with this:

There’s a biblical ark that rode out the Flood, and it was no bathtub. Noah built it somehow, with or without some mysterious ancient technology or extreme gopherwood. Does this mean God had to suspend the laws of physics to keep Noah afloat?

Let’s say He didn’t. In that case, could Noah get through the whole ark operation?

I can’t get over how much this sort of exercise feels like the discussions that take place on hardcore Star Wars forums, where fans discuss the dimensions of star destroyers and whether they could do X or Y without violating the basic rules of physics. It’s common for fans to discuss whether and how various aspects of their given fandom can be understood according to the laws of our physical universe, falling back on “mysterious technology that doesn’t exist in our world” when needed. The same is happening here.

Noah built the ark somehow—maybe through ordinary processes and with ordinary products, or maybe with “mysterious ancient technology” or “extreme gopherwood.” Did God have to suspend the laws of physics to make it work? Maybe. But let’s explore how it could have worked if he didn’t.

Did Noah need help? A pit-sawing team (of two) would take many decades to cut the wood for one ark. That’s cutting it close. Noah and sons had other things to focus on, so it makes sense that labor was hired, or that processed materials like sawn lumber were purchased. Noah should have been extremely wealthy having lived 480 years before the project even began. He probably had the help of his grandfather Methuselah, who lived to see the ark constructed.

This reads like every fan everywhere defending their fandom.

Any flood that rapidly inundates the world (in 40 days or less) will involve massive high-speed currents that would dwarf any modern tsunami. In fact, no modern flood lays down sediments anything like the huge, fossil-filled rock layers deposited all over the world.

Hmm. That might be something to think harder about.

Such a sudden inundation would pulverize everything in its path, including all shipping and coastal settlements.

How could the ark survive? One solution is to launch from the highest point. This keeps Noah out of the violence of the initial inflows of ocean water as predicted by the Catastrophic Plate Tectonics model. The Flood went on to drown every mountain in the pre-Flood world (Genesis 7:19). Since modern oceans contain enough water to drown the planet to a depth of about 1.8 miles (2.85 km), the pre-Flood terrain was probably limited to within this elevation. By the time the water reached the ark, the currents would have slowed to manageable levels before the launch.

Here, have a look at this handy image they include: 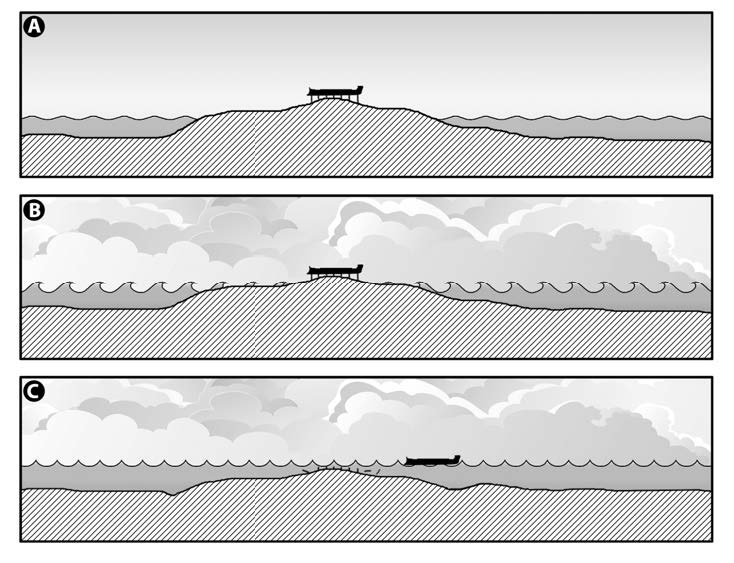 To be clear, the Bible does not say that Noah built the ark on high ground. It says nothing at all about where he built the ark. Here is what the Bible says:

There’s nothing there to suggest that the ark was built on particularly high ground. That’s something the author of this Answers in Genesis article is adding, that is not stated in the text. And sure, that’s fine. But that’s definite fandom territory. “Well maybe that would have worked if X.”

Look, it’s not like they’re not arguing that God did not exist, but every story in the Bible still happened. If they were arguing that, this technical debate would make more sense. If divine intervention isn’t a possibility and the Noah’s Ark story happened as written in the Bible, you have to figure out a way to make that boat work according to the laws of physics. But that’s not the case here. So why, then, is all of this so important?

I’ve never seen an Answers in Genesis article trying to find a way that widow’s flour and oil could have lasted forever without running out. They accept the reality of miracles, and of divine intervention. So why here? Why the need to be all scientific instead of saying “we know it happened”?

After discussing the fact that no wooden ship has ever been as massively long as the ark was, because wooden ships that even approach that size are under enormous physical stress and prone to leaking, the author asks:

Is this proof positive that the laws of physics must be suspended to keep Noah afloat?

The author explains that it is not, that Noah probably just used resilient ship building methods that have since been lost to humankind. But notice that the laws of physics being suspended remains as a viable backup option. If for some reason there is no physical solution, the author will not conclude that the Noah’s Ark story in Genesis must not have literally happened, but rather that God intervened and suspended the laws of physics.

While 330 feet (100 m) may well be the practical limit for a carvel-built hull with a single layer of planking, more appropriate construction methods would extend that boundary by at least 50 percent.

As for the compulsory miracles: God gave instructions to Noah, He brought the animals, He closed the door, and He even sent a wind. But was supernatural intervention the only thing holding Noah’s ark together?

Not necessarily. Maybe Noah used ancient bulkheads and ancient planking to build a ship that was more than able to withstand the stresses it faced during the Flood.

You see what I mean about accepting some miracles, while being willing to entertain the idea that the ark was held together by divine intervention?

Let’s return to the issue of fandoms. There is at least one significant difference between young earth creationism and most fandoms. When fans come up with scientific ways this or that part of their fandom could have really happened, they’re not trying to convince anyone that star destroyers are real, or that Tatooine is out there somewhere. When fans science their fandoms, they’re just having fun. Not so, for Answers in Genesis. When they science their fandom, so to speak, they’re trying to convince.

I have a guess to what’s going on. In the modern era, science has grown in importance while religion has increasingly taken a back seat in the mind of the general public. An increasing number of people are skeptical of miracles, and it seems likely, although I haven’t seen it studied, that people are more skeptical of big, geological miracles that reshape the planet than they are of small, everyday ones like recovery from cancer, or finding a missing phone.

In this changing environment, young earth creationists understand that appealing to divine intervention and miracles to explain things that don’t make sense scientifically is not as palatable as it once was. My guess is that this is the reason they cover their miracles with a healthy helping of modern science. For young earth creationists, though, whether the science they slather on their religious theories actually works out or not is irrelevant, because it’s not the science that matters. It’s what’s underneath.

Noah built it somehow, with or without some mysterious ancient technology. 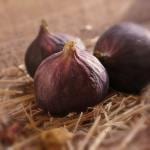 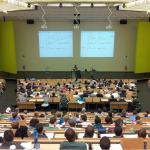 February 4, 2020 But Freedom of Speech! Evangelicals and College Campuses
Recent Comments
0 | Leave a Comment
Browse Our Archives
Follow Us!