Not Everyone Has Accepted Women’s Suffrage

Not Everyone Has Accepted Women’s Suffrage July 8, 2020 Libby Anne

If your social media feeds are anything like mine, you’ve seen advertisements for the new PBS series The Vote, which focuses on the suffragette movement and the 19th amendment, which gave women the right to vote. My brain goes weird places when I see this, and I’ll tell you why.

Summer camp in the early 2000s. I was 16. This was an odd summer camp, an anti-government conspiracy theory summer camp that many parents attended alongside their children. One day during the weeklong camp, we went zip lining. As I stood in line, waiting for my turn, I somehow fell into conversation with the dad behind me in line. He wanted to know whether I thought women should have the right to vote.

It was fairly clear to me that this dad was sizing me up as a possible wife for one of his four teenage sons. He even said as much one day later in the week, when he stopped me as I walked by his table in the mess hall and turned to his sons and told them that this was what they were waiting and keeping themselves pure for—to someday get a wife like me. Yes, it was awkward. It was very very very awkward.

As I said, that day waiting in line for the zip line, I was already pretty sure this dad was sizing me up. And I knew the answer he wanted. No, women should not have the right to vote. The reason was obvious! Wives were to submit to husbands, and unmarried women to their fathers. Men were to be householders, family leaders. Men’s role was the public sphere; women’s role was the private sphere. If these arguments sound like they come from a difference century, well—they do. 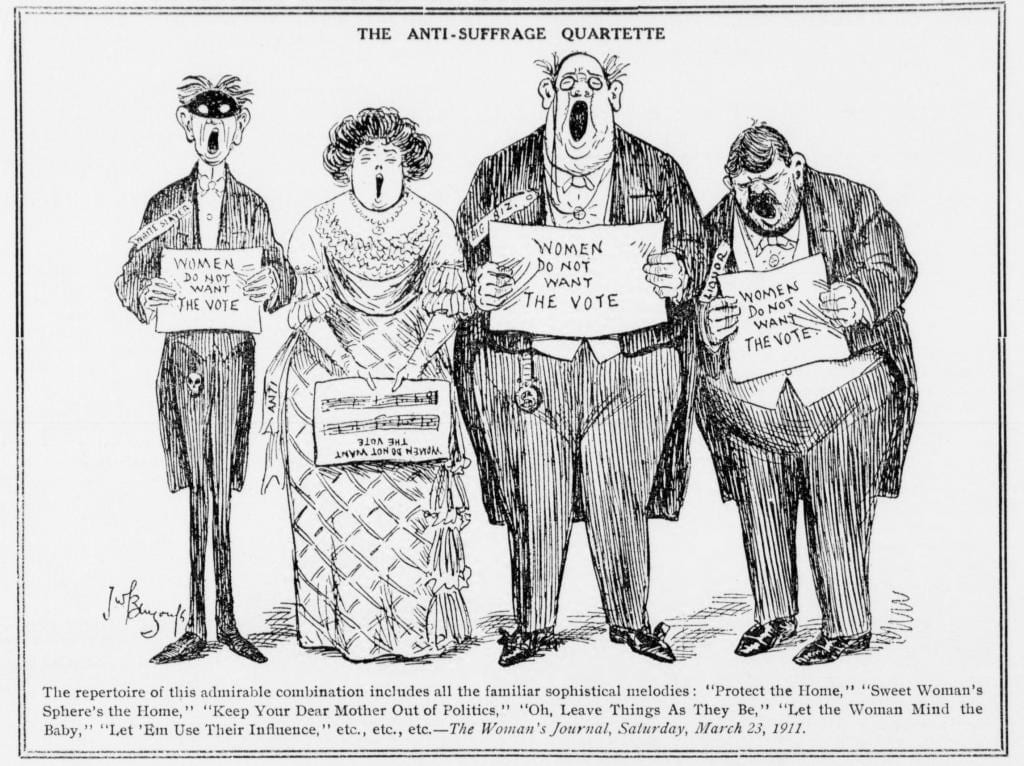 I grew up in a Christian homeschooling world that often felt like it was a race to the most extreme. Women shouldn’t go to college. No, wait! Women shouldn’t vote! Should women wear head coverings? What about asking their husbands’ permission to leave the house? The more extreme, the more devout. Anything that was old was good. Things that were new were suspect. The problem was modernity; we needed a return to an era when (white) men were respected and obeyed and everyone went to church.

It may seem odd that I agreed with these ideas at 16, but I did. After all, I lived in a community that granted me acclaim and respect in proportion to how closely I coddled up to reactive, backwards ideas about gender norms. Rejecting these ideas resulted only in ridicule and rejection; adopting and championing these ideas gained one status and acceptance.

My only nod to women’s suffrage, during that conversation with that father while in line for the zip line, was a concern that if godly women voluntarily stopped voting, the godly vote would be diluted—and the secularists would gain. Since women currently have the right to vote in the United States, I said, good Christian women should vote. For strategic reasons. And of course, their ballots should look identical to those of their husbands (or, if they are unmarried, those of their fathers).

He wasn’t so sure. See, friends, this is where the locus of debate on this issue rested. Should godly women stop voting, as an act of faith, and trust to God to ensure that their community’s political faction would not suffer as a result? Or should godly women vote even though women shouldn’t vote—for purely pragmatic reasons, thus doubling their husband or father’s vote?

I don’t want to pretend this was a monolith. While Christian homeschooling circles in the early 2000s often felt like a race to the most extreme—this is how things went from dating to courtship to, in some communities, arranged marriage—not everyone felt that women should not be allowed to vote. But even those who weren’t quite so ready to jettison women’s right to vote were quick to admit that giving women the right to vote had been a horrific electoral mistake.

Women tended to vote more liberal, you see. If women didn’t have the right to vote, it was said, the Republican presidential candidate would have one every election going back decades and decades. Conservatives would be in charge. We wouldn’t be in the mess we were in, with free love and socialism and big government. There were lots of explanations offered for this—women are tender hearted and want to take care of people, for example, so they vote for the government to take care of people, without realizing that, logically, this creates lots of problems, and that the government is the wrong body to fill that function.

I haven’t watched the new PBS series on women’s suffrage, but I do know what it’s like to grow up in a community that is, despite it being the twenty-first century, at best profoundly skeptical of women’s right to vote.

July 8, 2020 Why Is Health Insurance Tied to Employers in the First Place?
Recent Comments
0 | Leave a Comment
Browse Our Archives
get the latest from
Love, Joy, Feminism
Sign up for our newsletter
POPULAR AT PATHEOS Nonreligious
1