Want to see something interesting? Below is a chart listing the top three issues members of different religious groups viewed as critical. The top three issues indicated by white evangelical Protestants are: abortion (63%), fairness of presidential elections (62%), and terrorism (57%). Only one of these issues—fairness of presidential elections—was included in any other religious group’s top three critical issues. The other two issues listed by white evangelical Protestants—abortion and terrorism—were not among any other religious group’s top three. (Terrorism? Really? What is this, 2002?)

When compared with members of other religious groups, white evangelical Protestants are substantial outliers in their concerns. It’s tempting to look at the chart below, shake our heads, and conclude simply that evangelicals are out of touch, but I think there’s another explanation as well (in addition to being out of touch, I mean).

Let’s start with the chart: 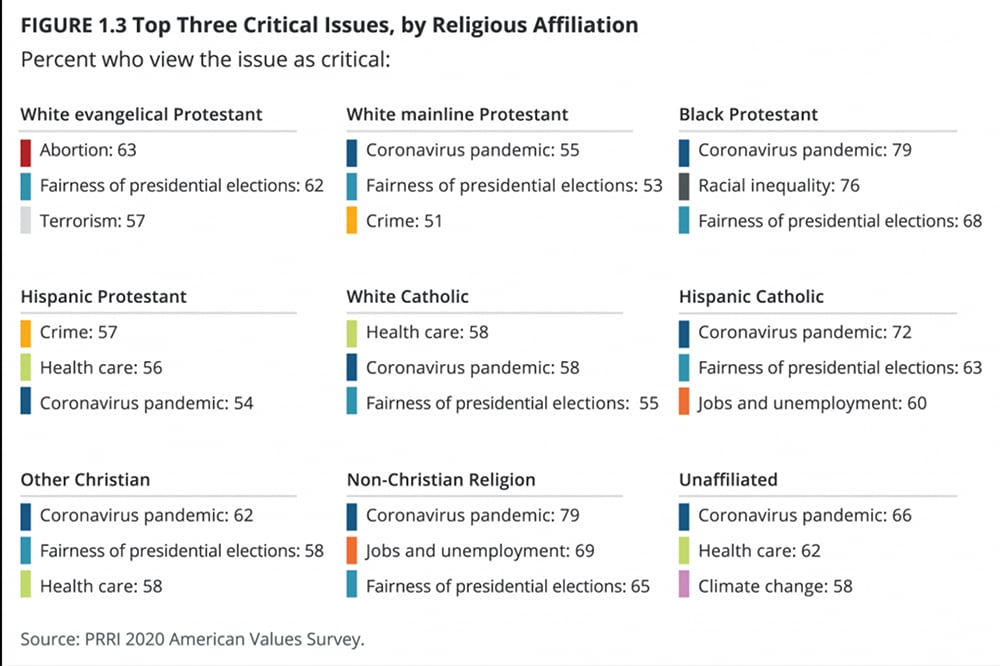 For example, white evangelical Protestants weren’t anti-abortion until after Republican Party strategists decided to make abortion a wedge issue in an effort to both bring white southerners and white Catholics (who were historically opposed to abortion) into the Republican Party. These political operatives were able to pull this off so successfully that white evangelicals literally rewrote the Bible to make it more in line with their newfound opposition to abortion.

There are other ways evangelical interpretations of the Bible have been shaped by their thrall to the Republican Party as well. See, for example, their opposition to government programs to feed and house the poor, despite the fact that there are a plentitude of passages in the Bible about helping the poor, and not a single verse saying the government shouldn’t participate in this helping of the poor (to the contrary, the Old Testament would seem to suggest the opposite).