For quite a while now, we’ve been told that one of the big secrets for improving education is the Internet. If we want all students to learn, then we need to get them connected. Put the Internet in schools. Make sure all children have computers at home. Oops. That’s a bit outdated. We should make sure they have tablets. This is the “digital technology as the savior of education” model.

But then there are the naysayers, those who worry that too much screen time is warping the minds of students. And the problem is not just the number of hours students spend in front of screens, but also the way interactive technologies breed a love of distraction. Students can no longer focus for extended periods of time because they’re used to jumping around, following links, being entertained while studying, texting their friends, etc. This is the “digital technology as the destroyer of education” model.

A recent article in the New York Times provides grist for both the savior and the destroyer mills. In “Technology Changing How Students Learn, Teachers Say,” by Matt Ritchel begins in a way that seems to support the destroyer hypothesis:

There is a widespread belief among teachers that students’ constant use of digital technology is hampering their attention spans and ability to persevere in the face of challenging tasks, according to two surveys of teachers being released on Thursday. . . .

One was conducted by the Pew Internet Project, a division of the Pew Research Center that focuses on technology-related research. The other comes from Common Sense Media, a nonprofit organization in San Francisco that advises parents on media use by children. It was conducted by Vicky Rideout, a researcher who has previously shown that media use among children and teenagers ages 8 to 18 has grown so fast that they on average spend twice as much time with screens each year as they spend in school.

The negative perceptions of teachers about the impact of digital technology on learning has not been demonstrated by longitudinal studies:

Scholars who study the role of media in society say no long-term studies have been done that adequately show how and if student attention span has changed because of the use of digital technology. But there is mounting indirect evidence that constant use of technology can affect behavior, particularly in developing brains, because of heavy stimulation and rapid shifts in attention.

Moreover, it could be that what teachers see as a distraction is not really so bad:

Kristen Purcell, the associate director for research at Pew, acknowledged that the findings could be viewed from another perspective: that the education system must adjust to better accommodate the way students learn, a point that some teachers brought up in focus groups themselves.

“What we’re labeling as ‘distraction,’ some see as a failure of adults to see how these kids process information,” Ms. Purcell said. “They’re not saying distraction is good but that the label of ‘distraction’ is a judgment of this generation.”

In fact, “The surveys also found that many teachers said technology could be a useful educational tool.” Access to the Internet helps students become proficient, independent researchers. Yet, “nearly 90 percent [of teachers in the Pew survey] said that digital technologies were creating ‘an easily distracted generation with short attention spans.'” Still, “Other teachers said technology was as much a solution as a problem. Dave Mendell, 44, a fourth-grade teacher in Wallingford, Pa., said that educational video games and digital presentations were excellent ways to engage students on their terms.”

Noting the diversity of opinion, Richtel writes, “The surveys include some findings that appear contradictory. In the Common Sense report, for instance, some teachers said that even as they saw attention spans wane, students were improving in subjects like math, science and reading.” Moreover, “Pew said its research gave a “complex and at times contradictory” picture of teachers’ view of technology’s impact.”

So, then, as digital technology fills the lives of students, is the sky falling? Or is there a new day dawning? The surveys on which Ritchel reports give a mixed response. They suggest that both the savior and the destroyer models are too narrow. When it comes to the impact of digital technology on education – and on the rest of our lives – the either/or answers fail to reflect the complexity of reality.

I wonder, is it possible for students – indeed, for students of all ages – to learn to use digital technology in a wise and disciplined way? Could we learn to make use of the extraordinary access to information provided by the Internet and, at the same time, learn to limit the potential for distraction and superficiality? What do you think?

I’d tell you what I think, but I just got a text from one of my friends, so G2G. BFN.

October 23, 2012
Living in the Brave New World of Social Media: Posting a Death on Facebook
Next Post 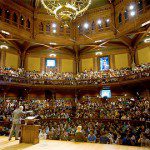 November 5, 2012 Today's Online Education: The Massive and the Intimate
Recent Comments
8 Comments | Leave a Comment
Browse Our Archives
get the latest from
Evangelical
Sign up for our newsletter
POPULAR AT PATHEOS Evangelical
1