When a presidential candidate gives a speech, members of the media often follow up with a “fact check” commentary. They evaluate the accuracy of the candidate’s claims, something that often reflects poorly on his or her grasp of reality.

I propose to offer a handy fact check for the recently released film version of Les Misérables. I saw the movie yesterday and found it to be a stirring cinematic version of the stage musical version of the Victor Hugo novel, Les Misérables. For the most part, the movie script closely follows the stage script, which closely follows the book. But, at certain points, the movie diverges from the play. As I watched it, I sometimes found myself a bit relieved (when my least favorite song from the musical was not included in the movie) or a bit perplexed (as in, “Wait a minute! Was that in the stage version? Or the novel? Or is this completely new?).

Of course, I won’t be offering a fact check in the literal sense, as if the characters and events in Les Misérables are historical. Rather, I propose to evaluate innovations in the movie in light of their faithfulness to the Victor Hugo novel. Where the film differs from the play, is the film more accurate? Less accurate? Or simply a different telling of the same story?

Before I get into the details, let me lay out of few basics:

1. There will be spoilers ahead. If you have not seen the movie and plan to do so, I would encourage you not to read beyond today’s post until you have seen the film.

2. One minor spoiler has already been revealed: The movie version is mostly like the stage version, though with some deletions and some additions. If you’re a Les Mis lover, you will notice several differences.

3. In my opinion, the stage musical does an amazingly accurate job telling the core story of the novel. I first saw Les Misérables onstage in 1991, thanks to a couple dear friends who took my wife and me to see it. I was deeply moved by the production and became a fan. In the last twenty years, I’ve seen the musical onstage perhaps ten times. I’ve listened to a recording of entire musical perhaps fifty times. I’ve watched the tenth- or twenty-fifth anniversary editions at least twenty times. And I’ve read the original novel in translation twice. (This is no small feat, because the book is well over a thousand pages long. No, I have not read it in French. That would take me the rest of my life, given how much French I have forgotten since grad school.) Both times I read the novel, I was struck by the brilliance of the musical. It manages to condense an extremely long story into a comparatively short musical, while maintaining extraordinary faithfulness to the original. For example, there is a line in the musical, sung by Jean Valjean about the bishop: “Yet why did I allow that man, To touch my soul and teach me love? He treated me like any other. He gave me his trust. He called me brother.” In the novel, the scene where the bishop calls Jean Valjean “brother” is a powerful and watershed one, part of Jean Valjean’s transformation. The musical gets this precisely right, in only a word.

4. The movie version of the musical is even more accurate than the stage version. When the film changes the script from the stage version, in almost every instance the result is something more faithful to the novel. (At the moment, can think only of one exception to this rule, though I expect there are others I have overlooked.) So, in general, if you are a fan of the musical and the film version seems somehow wrong, chances are good that you are getting closer to Hugo’s original story. Bottom line: You can trust the film in its telling of Victor Hugo’s gripping story.

In tomorrow’s post, I’ll examine some of the significant differences between the stage and film versions of Les Misérables, evaluating these in light of the original novel (translated into English).

In the meanwhile, I’d urge you to see the movie. I have some discerning friends who say this is the best movie they have ever seen. Others have some minor reservations, but still deeply appreciate the film. I sure did. 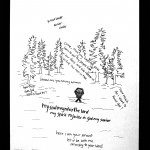 December 17, 2012
Devotional Doodle for the 16th Day of Advent, by Linda Roberts
Next Post 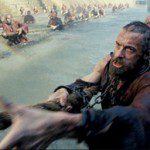