Absolutely, “Interstellar” Is a (r)eligious Movie

Have you seen the mind-bending Interstellar yet? I did, last week, and in Christianity Today I wrote about its religious dimensions:

To me it seems that Interstellar, perhaps more than any of Nolan’s films to date, positively resounds with religious—even Christian—stuff that might not ring as loudly if you weren’t steeped in it to begin with.

To wit: Cooper promises Murph he’ll return to earth, and she despairs of his return, then realizes he’s been talking to her and guiding her all along, which rings awfully sharply of the early Christian church’s assumption that Jesus would return within their lifetimes. And Cooper communicates with Murph through books (hello). He has “become” one of those beings who exists on more than three planes—you know, for a while at least, he’s omnipotent and omniscient and omnipresent. There’s the somewhat unavoidable new-Adam-and-Eve imagery near the end. And did anyone hear echoes of Lewis’s Space Trilogy?

But there’s also the biggest of big religious questions, like these: who are we? What are we made to be? (And should that be determined by others?) Are we worth saving? Can we save ourselves? And should we? 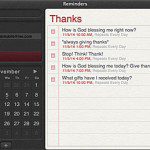 November 17, 2014 How Technology is Enriching My Season of Thanksgiving
Recent Comments
0 | Leave a Comment
"Great prayer."
John Donaldson A Prayer for Memorial Day
"Yep, it works. Was looking around to see if anyone knows WHY."
Rick Chance A Miraculous Cure for Bug Bite ..."
"Hi Pastor,I am hoping you will continue your discussion on how God guides us. Can ..."
BB How Does God Guide Us?
"Happy birthday USA you are 243 years old today. Like in a marriage, a lot ..."
Tom Krayg Astounding Freedom: A Reflection for Independence ..."
Browse Our Archives
get the latest from
Evangelical
Sign up for our newsletter
POPULAR AT PATHEOS Evangelical
1