To borrow and butcher a line from Poltergeist II, “I’m ba-a-ck.” After a long time away from active blogging, I’m beginning again as a part of a new professional season in my life.

During the last few years while I was working for the H. E. Butt Family Foundation (AKA Laity Lodge, The High Calling), I had little time or energy for blogging. Most of my writing effort went into the Daily Reflections, devotionals that were emailed to more than 20,000 people each morning. For quite a while, Alissa Wilkinson, an amazing writer, not to mention amazing human being, admirably filled in for me on my blog. Now she has gone on to other things, like writing for the Washington Post and The Atlantic. (Which is more impressive, my blog or the Post and the Atlantic? Hmmmm. Hard choice.) But, since December, my blog has been fairly quiet on the new material front. (I continue to get more than a hundred-thousand readers each month, but to archived material like my article, The Seven Last Words of Christ: Reflections for Holy Week.)

I haven’t exactly been lazing off during the last few months, however. All of my literary effort went into writing a commentary on Ephesians, which will be published by Zondervan in 2016. It’s part of the Story of God commentary series. I’m pleased to say that I have finished my first draft of this piece, which now gives me time and energy for blogging.

But, an even greater reason for my return to blogging has to do with my new job. As of Wednesday (yes, April Fool’s Day), I will begin as the Executive Director of the Max De Pree Center for Leadership at Fuller Theological Seminary.  (You can find Fuller’s official announcement here.) I’m excited to give direction to the Center and am thrilled to join the movement of God at Fuller Seminary. Under the leadership of Mark Labberton, Fuller’s president, the seminary has envisioned its work in terms of the calling (or vocation) of every Christian, which means every student, to live all of life with and for Christ. Those students who go on to pastoral ministry will be equipped to help their members discover and live their vocation every day. Those students who will work outside of the church – and there are many at Fuller – will see their lives as a genuine living out of their calling. Under President Mark’s leadership, Fuller is living out the truth that all Christians are called to Christ, to be his disciple in all of life. (For more on this, see Mark’s book, Called: The Crisis and Promise of Following Jesus Today.)

Though the De Pree Center will contribute to the formation of Fuller students, its main work is to reach leaders throughout the world with the vision and resources of the seminary. The Center seeks to serve leaders so they might flourish in life and leadership. Yes, the De Pree Center, following the example and teaching of Max De Pree, will help leaders become more effective and purposeful in their work. But the Center will also be deeply concerned about the person of the leader, the life of every leader in and beyond work. We want to see leaders thrive not only in their leadership roles, but also in the rest of life, in family and friendship, in church and community, in play and prayer, in public and private.

I’ll have more to say about the De Pree Center later, you can bet on that. For now, I want you to know that I am indeed “ba-a-ck.” (Did you know that the famous “They’re ba-a-ck” line actually comes from an ad for Poltergeist II, not from the movie itself? In the movie, Carol Ann’s “back” is rather quick.) I’ll be blogging on a fairly regular basis, both here and at the De Pree Center “Insights for Leaders” blog.

Also, I’m beginning a new digital, daily devotional called Life for Leaders. Each day, the De Pree Center will email to subscribers a Bible-based devotional written specifically for people in a wide range of leadership roles: in the marketplace, the church, non-profits, arts, government, and beyond. I’ll have more to say about this in future posts. If you want to sign up to start receiving Life for Leaders, you can do so here.

I look forward to sharing with you in this new season of my professional and, indeed, vocational life. I hope you’ll join me.

December 11, 2014
Congratulations HEB! One of Best Ten Places to Work in the U.S.
Next Post 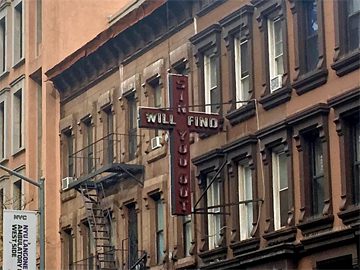 Evangelical
Grace Will Find You Out
Mark D. Roberts
TRENDING AT PATHEOS Evangelical