How to Ruin Your Holiday Celebrations

How to Ruin Your Holiday Celebrations November 24, 2017 Mark D. Roberts

Do you want to ruin your holiday celebrations? If you do, I have a suggestion. I guarantee it will work.

On Thanksgiving morning I was eating my breakfast in a hotel near Zion National Park in Utah. It was early, and I was enjoying the sunrise on the majestic cliffs across the canyon from where I was sitting. It was truly a sublime moment.

A few feet away from me, a family sat down to for their Thanksgiving breakfast. They appeared to be a mother with two young children, her sister, and her father. I paid them little attention as they ate, engaging in quiet conversation.

But, suddenly, the mother began raising her voice, speaking emphatically to her father. I couldn’t help but hear her use the word “Trump” several times. Her father responded calmly, trying not to interrupt the peaceful morning for people like me.

But the daughter got even louder. Even with my earphones in and Thanksgiving music playing, I learned that this man was a supporter of Donald Trump, at least according to his daughter’s criticisms. She was working hard to get him to change his mind, loudly underscoring all the ways she believed that the President was failing us.

After about ten minutes of this tirade, one of the woman’s daughters began to complain, “I’m bored. I’m boooooored.” But this had no impact on her mother. Then, a few minutes later, the other daughter began to cry, apparently upset because her mother was so anger and loud. Still, the young woman continued on, trying to show her father how wrong he was to support Donald Trump.

Several minutes later, the mother’s sister took the two daughters away, which gave the mother more opportunity to add to her strident derision of the President. Her father, amazingly enough, managed to speak softly, eventually admitting that he needed to rethink some things. This quieted down the daughter. She did not apologize, but she did make her father promise that he wouldn’t tell her mother about their breakfast.

I must admit I felt quite upset about what I had witnessed. Partly, it seemed rude for this woman to speak so loudly that many of us in the restaurant were disturbed for about twenty minutes. I really didn’t need to overhear a family quarrel. But, also, I felt sad, sad for this woman and her family, sad for the thousands of households that would experience something like this during holiday celebrations. These days, it’s so easy to let the nasty political tone of our country invade our hearts and our conversations.

If you happen to be part of a family or friendship group in which there is complete political agreement, chances are you won’t mess up your holidays by talking about national politics (not that I recommend this, mind you). But if you find yourself among relatives and friends who represent diverse perspectives, and if you’d like to ruin your holiday gatherings, then I guarantee that bringing up President Trump will do the trick. 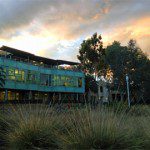 Evangelical
Bless the world that swirls outside these windows
Mark D. Roberts