One of my favorite cleansing baths is the beer bath. While I’m not positive where this practice originated, Raven Kaldera writes that it’s an old German folk custom. But I have known practitioners of lots of different magickal paths use the beer bath. Christopher Penczak theorizes in Gay Witchcraft that while a beer bath may sound strange, “the folk remedy probably comes from the idea of barley water, and barley is a sacred grain of the Goddess. In fact, all grains are. The use of beer is our modern equivalent. Bathing in it, rather than drinking it, can cleanse the energy field of harmful energies, judgements, and ill will from others.”

A beer bath is my go to choice when it comes to removing the energy of people’s judgements, projections, and harmful energies which have a spiritual and psychic affect on us, whether that’s unconscious or whether it’s the malocchio, the evil eye. Draja Mickaharic writes in Spiritual Cleansing that “the most effective single remedy for the remission of malocchio is a beer bath. It will remove all traces of simple malocchio, and at the same time add strength to the person’s spiritual body.” Penczak differentiates harmful wishes and jealousy from the evil in The Witch’s Shield, writing that “the evil eye is much like harmful judgements and projections, but it is a conscious and knowing projection of harm. It is when someone with a little knowledge and understanding knowingly wishes harm or bad luck upon a person or family, usually because they have an axe to grind.”

While there are many recipes for a beer bath, I have my own. In my beer bath ritual I work with Hekate, reference the underworld rivers, and uses dark beer (which is what I was originally taught to use for this), black tourmaline, a piece of jewelry with the evil eye charm, a black candle, and a good quality rue oil. Aside from working with Hekate on a regularly basis, I use her in this because both averting evil and purification were particularly associated with her in ancient times. Rue is a general protection her and also an herb that traditionally is used against the evil eye. Black candles are excellent for protection, cleansing, and repelling bad energies. Salt is known for it’s neutralization of energy and is often viewed as protective by certain magickal traditions. This is most powerful when performed on a dark moon, new moon, or waning moon – but can be used whenever needed.

Crystal expert and author Nicholas Pearson explains that, “Black tourmaline has a strongly grounding and purifying effect on our energy field. We find it so grounding largely because of its iron content, while the structure of tourmaline facilitates movement and release. The combined action fortifies the energetic channel that links our bodies to that of the earth itself; this enables us to release unwanted, unhealthy, or disharmonious energy quickly and easily–much like dumping it down a cosmic drain. The end result is that we feel safer, clearer, and ready for life.”

Have your items all together on the counter. Charge the black candle and ingredients for the purpose of protection and removal of other people’s energies affecting you. Draw a bath with the lights off. Begin by reverently reciting the Star Goddess Prayer and lighting the black candle. I then proceed to call upon Hekate:

“Hekate Apotropaia! Protectress! Great Purifier!
Neutralize the energies sent against me with ill desire
Bless this water and this mixture
Transform it all into a mighty elixir”

Pour the dark beer, the black tourmaline, salt, and the three drops of essential oil into the running bathwater. Then step into the bath and petition:

Drain the bath water and air dry in the darkness of the candle light. When completely dry, recite the Star Goddess Prayer and extinguish the flame. I don’t use this candle for any other purpose than this ritual. Wear the evil eye jewelry or charm during the day and bury the tourmaline in the Earth as an offering. 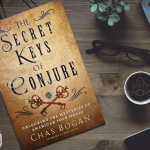 January 12, 2018
Review: The Secret Keys Of Conjure
Next Post 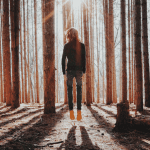 January 15, 2018 Missing The Forest For The Trees
Recent Comments
0 | Leave a Comment
Browse Our Archives
Related posts from For Puck's Sake