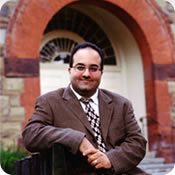 The Muslim Portal at Patheos  is hosting the “Three Questions” project for the month of September in conjunction with the tenth anniversary of the terrorist acts of 9/11.  We are asking American Muslims from across the nation three simple but important questions. Click here to learn more about the project.

Omid Safi, professor of Religious Studies at the University of North Carolina at Chapel Hill, offers his answers to the three questions:

1. What is the most pressing issue or concern for you as a Muslim in America today, 10 years after the tragedy of 9/11?

It has made me realize the profound ugliness and immense beauty that all of traditions–religious and civic–contain.

3. What do you think non-Muslim Americans most need to know about Muslims?

That we too are fully human, not that we need to be humanized. We too are human, the same mixture of good and bad, ugliness and beauty, that all the rest of humanity are. The line between good and bad does not go between nations and religions, but inside each and every single one of us.

Reflections on the Danish cartoons a...
Akram's Razor
Related posts from Muslimah Next Door