A CranioRectal Inversion as Both Nemesis and Insightful Tool 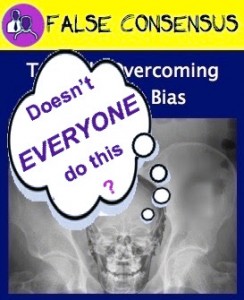 Just a reminder that the purpose of this discussion aims at stimulating thought and self awareness as tools to help those in recovery from trauma learn how to make safer choices. To make the discussion more jocular, we’ve defined Cognitive Biases as “CranioRectal Inversions” (CRI).
The False Consensus Bias refers to a tendency to overestimate the number of people who share our views, beliefs, values, and behaviors. I tend to think of Descartes’ “I think therefore I am.” If I start with myself at the center of my understanding, it seems to naturally follow (at first) that most people will be somewhat like me. I think this, therefore a good number of people will think the same thing. You are your own norm, and you can fall into the trap of thinking that you represent most people.
But I grew up differently than most people, and I spent most of my time with adults as is common with only children. As noted before, the false consensus becomes something of a pitfall for those who didn’t grow up with the challenges that siblings impose, so they tend more than others to see others as the same as they are. And it’s odd, because as eccentric as I am, I’m rarely ever the typical example of anything.  People raised in high demand groups probably also struggle with this challenge because of the insular environment in which they were raised.
Family Dysfunction
It’s also painful when whatever norm involves family dysfunction. As hard as I’ve chased after healthy growth, examples of the past still come up with my counselor. Having worked with her for a very long time, I recognize her distinctive smile, direct gaze and the gentle, subtle, and slow shaking of her head, expressing, “No.” She never actually says anything like that, as my awareness of the change in her expression is usually enough. I never see it coming, either. It’s usually something that I grew up with and didn’t think was so bad, but when spoken aloud to another, it quickly becomes apparent. The first time it happened, I was working with another counselor years before who was floored by my quoting of a family member. “Did you hear what you just said?” she asked. It gave me permission to question what I thought of as a common experience.
Research into this type of bias has shown that one of the primary reasons why people tend to fall into this bias can come from assuming that one’s family represents what is normative. If more of our life is spent with people who share the same values and experiences (our friends and family), we would have no reason to think differently about others outside of that circle. Most all of those around us behave as we do, and we can take for granted that this is universal. Having been through several cross country relocations, I can definitely attest to the rude awakening of a new norm concerning just the common, benign elements of daily life. We also tend to notice in others those same things that are important to us, so our selective attention makes them stand out to us, possibly leading us to believe that people think as we do.
As a Tool
Though it wasn’t my first brush with true evil, when I exited my spiritually abusive church, I was essentially forced to think about how horrible people could be. I’d been able to avoid and dance around evil before, pretending that it wasn’t that deep or terrible. Every person has some good quality, but I experienced first hand just how those I thought of as the best of people could be the most horribly cruel and glib about it.
Researchers have suggested from their findings that the False Consensus Bias helps to support self-esteem. If we feel positive about ourselves, we have a hopeful motivation to believe that others think like we do.
At age thirty, I walked away from my abusive church, and it seems like the next decade of life was an education on just how evil people could be. We moved to a different part of the country, and I felt like every single area of my life every day was affected by these evil people that were either held back from me, or I had just managed to avoid them by living in a tighter bubble with people who thought more like I did. I’ve since learned, also, that I had a very good experience in clinical areas where I was not exposed to certain conflicts and garnered a great deal of respect. It was as if I’d signed up for a graduate level course on how evil, fickle, and duplicitous people could really be, for everything seemed to change. I think that some of it had to do with PTSD, but moving to a very different culture had much to do with it as well. 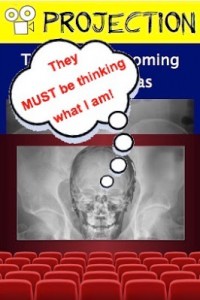 Projection
Projection as a cognitive bias takes the idea of thinking that you think the same as others in the form of false consensus and advances it a step further: that people are motivated and act the same way that you do. Projection was first studied, before false consensus, as an ego defense mechanism which allows people to feel more justified about their own behavior by projecting it on to others. If it’s the norm, than it’s okay.
When that veil of innocence was lifted away from me as I processed what happened to me in my Shepherding Discipleship church, I realized just how much projecting they did and how willing I was to accept it because previous experience (and thought reform). But something surprising happened as I healed and worked through the painful recovery process. I found that I could learn a great deal about the frame of mind of the person doing the projecting.
About a year after I left that church, I ended up taking a job with a sociopath – which I didn’t realize right away, of course. I was hired to teach nursing part-time, and I started out full time to finish up with the round of students who were nearing graduation. The program was small enough that we had occasion to talk about the performance of the students, and I was amazed at how my sociopath coworker ascribed the worst of everything to those students. As hard as it was for me to think deviously and as easy as it was for me to have compassion and hope for the students, the opposite was consistently true of her. Since that time, I tend to see this bias as my friend, for people end up telling you a great deal about themselves when they start projecting – especially if their observations are negative.
The next post will explore even more details about
and corollaries to the False Consensus Bias.
For Further Reading:

Pull Your Head Out

December 26, 2016
Quoting Quiverfull: All Hail the Womb?
Next Post

December 26, 2016 Quoting Quiverfull: Never Miss an Opportunity to Gay-Bash?
Recent Comments
3 Comments | Leave a Comment
"This is late, partly bc of my preoccupation and partly bc I'd been slowly reading ..."
Jennifer Serena’s Serenity – Luxury Hotel, Birthing ..."
"Thank you for your commitment to truth and love, Suzanne. Best wishes to you and ..."
Meredith Anne Not a Goodbye, More of a ..."
"For what it's worth, I've learned a lot from you about a Very Creepy movement ..."
Gwen Pryce Not a Goodbye, More of a ..."
"Unfortunately, this kind of satire (if it even is satire) is what gives Christianity the ..."
Emily Is Biblical Gender Roles a Big ..."
Browse Our Archives
Related posts from No Longer Quivering