The Wrath in Plathville

I didn’t grow up in a home with rigid, religious rules, but my parents came of age in the late 1950s, so they share many moralisms with Quiverfull (QF). I remained an only child, enmeshed with my fear-driven mother, and retreated to Christian school when I failed to integrate easily into the wider world. My parents whose good favor I never attained were zealous to see me launch successfully into adulthood ASAP, so in that sense, their agenda bore no similarities to QF.

Perhaps that’s why I was shocked when I binged on the first season of TLC’s new show, Welcome to Plathville. I watched one episode of the new show about Kim and Barry Plath’s QF family, curious about the plausibility that season two will include the Rodrigues wedding. While I can barely endure such shows, I found this show compelling. I watched its unlikely protagonists and their challenges emerge as four of the eldest Plath children embark upon adulthood. I see Kim as the antagonist who projects onto her children her own life and fears. She uses tight control of her family like an addict uses a drug to ward off pain. Her husband Barry seems like her supporting actor, and my husband even commented on this predictable dynamic that we’ve seen among our QF friends. 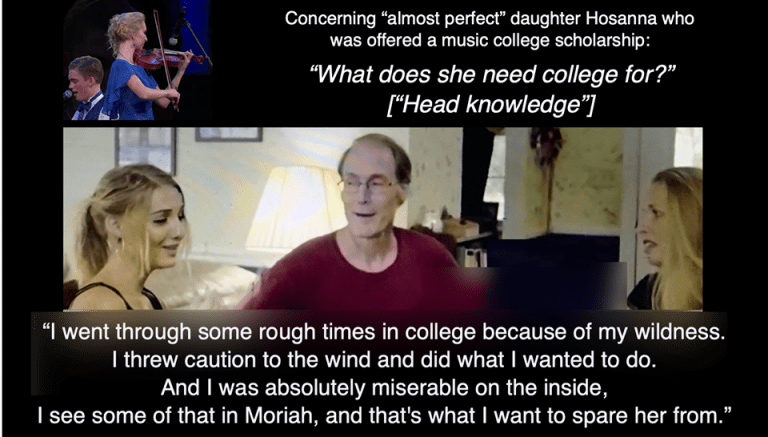 Sixteen-year-old Moriah’s personality doesn’t meld well with the QF ideal, and I revisited feeling undesirable and rejected by my parents, just as she expresses. I also heard the echoes of my mother who always referred to her desire to be an excellent parent as a sufficient solution to all of our conflicts whenever my needs presented too great a challenge. Kim seems completely unwilling to consider that her approach to preparing her other children for adulthood hasn’t worked well for Moriah, and she defines Moriah as the problem. 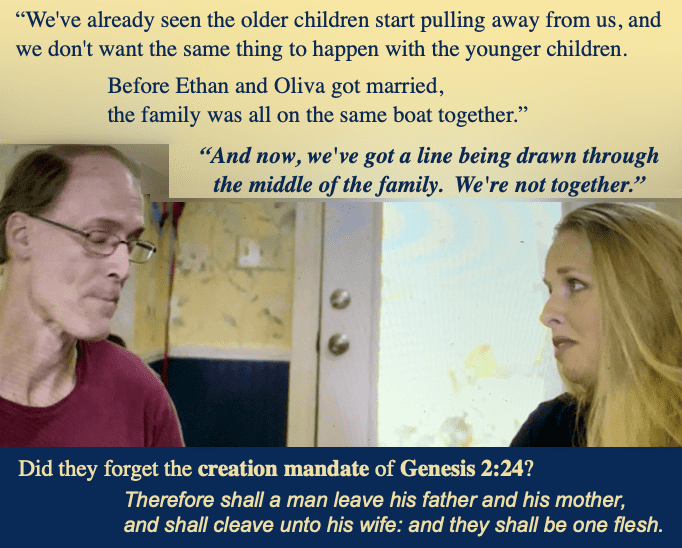 Kim and Barry also characterize their new daughter-in-law, Olivia, in much the same way, claiming that she has damaging character flaws. Olivia who married the eldest Plath son becomes the fulcrum for Kim who blames her for changing their socially isolated family. These alleged flaws have more to do with control of the over-spiritualized preferences of their burgeoning adult children. Olivia responds to the criticism with a statement that I love: “I can’t change the essence of who I am.” Kim expects that Olivia will alter her identity (‘character’) to fit the Plath norm, and she uses access to the younger children as a tool of manipulation. Kim casts it as an issue of parental authority, but it quickly plummets into a demonstration of control through conditional love.

Media suggests that Ethan and Olivia will not participate in the second season of the show because of these difficulties. I’m glad that they did the show, though. Ethan and Olivia model a kind, Christian example wherein they assertively declare their feelings, wants, and needs in a healthy attempt to negotiate their relationships with the family. QF parents see the show as a demonstration of ‘bitterness’ which they abuse as a thought-stopping cliché, but I see a model for kids that will help them move forward in hope when they get the chance. Ethan and Olivia become the true protagonists whose honesty outshines all else, and I could not be more proud of them.

July 14, 2020 Being a Grand Parents Means Making a 'Grand Impact"?
Recent Comments
0 | Leave a Comment
Browse Our Archives
get the latest from
Nonreligious
Sign up for our newsletter
POPULAR AT PATHEOS Nonreligious
1