A previous discussion of ‘Cultural Marxism’ as the grand enemy of Protestant thought in America that identified Gary North as an evangelist but neglected other activists who were also inspired by Theonomy. Such a review of Quiverfull sentiment cannot ignore the history of different sources of the panic over other ‘isms’. Along with others, RC Sproul, Sr is known to say that ‘-isms’ (Socialism, feminism, etc.) are never a good thing for Christians in the general sense because they supplant the primacy of Scripture should they become a guiding theme.

While further researching the idea that the New Calvinism in the US represents a different faith than traditional Calvinism, I was shocked to find another reference to the Frankfurt School. Tim Keller, the founder of the Calvinist parachurch organization The Gospel Coalition, writes about their influence. Keller states that in college in ’68, he found the ideology of the Frankfurt School compelling because of its social activism aspects. He then found a “band of brothers” in Christians who also sought a renewal of the Social Gospel. The author of The New Calvinists claims that Keller’s devising and following a Christian reiteration of the Frankfurt School’s social justice “became the goal of his life” (p.19). Keller further expounds upon his syncretic view of social duty in a subsequent book. Whether Keller’s view has any bearing on Voddie Baucham’s use of the term ‘Cultural Marxism,’ I know not. 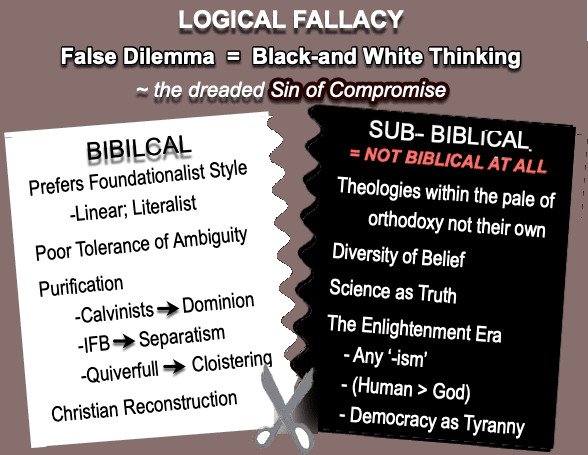 Remember that the term “Fundamentalism” originated in the early 20th Century with the Presbyterians and the Baptists who coined the term in the discussion of beliefs that were essential for Christianity. Textual criticism and the debate over evolution threatened to dilute the core teachings of the Protestant faith.

By 1970, the Theonomy-influenced Francis Schaeffer emerges as a powerful voice in the discussion of Christian Reconstruction — that which seeks to restore Christians to a position of influence in civil government. He and others at Westminster Seminary in Philadelphia popularize the term ‘Secular Humanism‘ to identify cultural threats to the ‘Judeo-Christian Ethic‘ and its principles in American society. Westminster, a seminary that formed after withdrawing from Princeton over the debate of Fundamentalism, once recruited those who could offer any strategy to tackle the newly-named monster of secular humanism.

At the same time in history as the Southern and Independent Baptists separated over Fundamentalism, Europe emerged from WWII. According to A Spectre Haunting Europe, focus shifted away from Nazism as a social evil on to Communism to create a demonized, Eurasian enemy. Protestantism (Presbyterianism in particular) emerges as a significant force in the battle against this global evil.

The term ‘Judeo-Christian’ describing the shared ethics between Christian and Jews became a prominent term within Christian anti-totalitarian tropes. Further investigation of this history suggests that ‘Judeo-Christian’ as a term derived from the Nazi concept of ‘Judeo-Bolshevism” which maintained that Communism was a conspiracy plot conceived by Jews. Thus, some maintain that the earlier Right Wing Populist conspiracy of Judeo-Bolshevism served as the basis for the language and some strong philosophical underpinnings of the worldview of the Christian Right. And none of us who grew up using that term had any clue that it had anything to do with another ideology. I wonder if Schaeffer did?

A Spectre Haunting Europe: The Myth of Judeo-Bolshevism

Building God’s Kingdom: Inside the World of Christian Reconstruction

The Origins of Totalitarianism

The Battle for the Mind

June 18, 2020
The Evangelical Response to Black Lives Matter is Have More White Babies?
Next Post

June 20, 2020 "Black & Tan" by Doug Wilson: Introduction
Recent Comments
0 | Leave a Comment
Browse Our Archives
get the latest from
Nonreligious
Sign up for our newsletter
POPULAR AT PATHEOS Nonreligious
1