Baucham’s ‘Cultural Marxism’ from the Perspective of Right-Wing Populism

To give some perspective on my understanding, I grew up in anti-intellectual Word of Faith which maintains that divine health comes through ‘getting enough of the Word’, but it also holds the believer accountable for convincing others to convert. My gateway into Calvinism came through D. James Kennedy, and later through R.C. Sproul, Sr, offering thoughtful depth that I’d lacked. The predestination element soothed my panic for my perceived responsibility for whether others went to heaven or hell. In the early ’90s, my husband listened to Marlin Maddox radio which featured Theonomists. We were excited to learn that our church that we attended for four years also had connections to Theonomy through the Shepherding movement. (We were cult exit counseled when we left.)

As my perspective concerning Quiverfull expanded while still in the mindset, I realized that I mistook Theonomists for all Calvinists, partly because of my confirmation bias. Before Y2K, the Theonomists were not as open about their extreme views. I do I remember asking my husband after reading Gary North‘s newsletter for the first time if he thought North was insane. (He agreed.) But other Theonomists wrote useful articles that spoke to spiritual life. In time, I eventually decided against Christian Reconstruction and found my way to Berlet’s book about Right Wing Populism. My chin hit the floor when I saw the names of the same theonomists to whom we wrote checks of financial support. 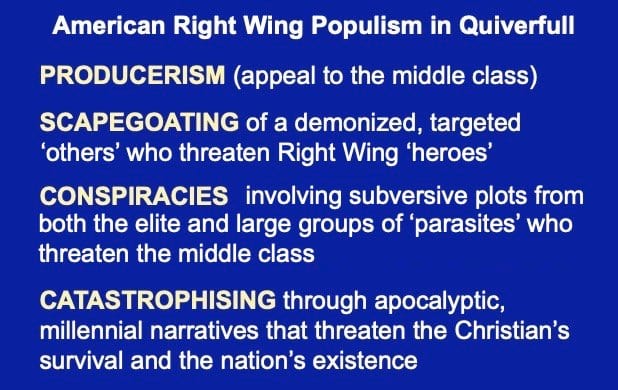 Right Wing Populism is a political ideology that seems to be universally loved by Evangelicals. There are many varieties, but for NLQ, the Christian ones concern us. Proponents seek theocracy through a very predictable set of tactics to make America Christian again. The approach uses relevant societal problems to appeal to the beleaguered middle class. It distorts connections between the issues to it’s vilified, anointed scapegoats to create causalities that do not exist (conspiracy theories). With a lofty goal of restoring both church and nation, it uses catastrophe to whip everyone into agreement with its perspective through fear. Find information here, or read these quotes from the book.

Because the Gary North’s role in the origins of the Christian Reconstruction movement (Religious Right effort to secure a Christian presence in civil government), much of North’s attitude pervaded QF culture. To my knowledge, he is the primary source to initially identify “Cultural Marxism” specifically as the source of all evil, along with the general acceptance of secular humanism as the enemy. The Frankfurt School coined the term that Voddie Baucham also adopted.

Before WWII, wise guys of the Frankfurt School (affiliated with Goethe University in Frankfurt) collaborated to criticize capitalism, classical Marxism, and the Enlightenment to draw up a ‘better’ theory of society. Based on the ideas gleaned from Freud, Hegel, and Marx, they conceived their critical theory that was meant to emancipate society – which they called Cultural Marxism. In an upcoming post, I’ll highlight the tactics used, but as for Marxism, it’s just more Gary North.